Art New England in the Berkshires 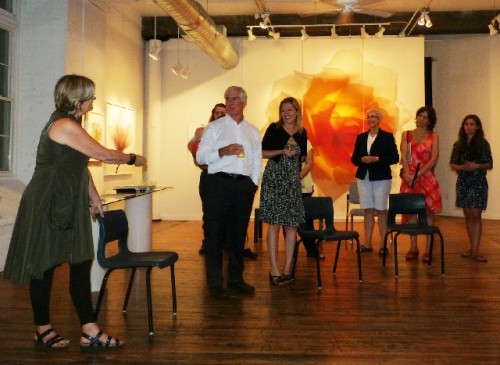 Meeting with artists and community leaders at the Eclipse Mill Gallery. Giuliano photos. 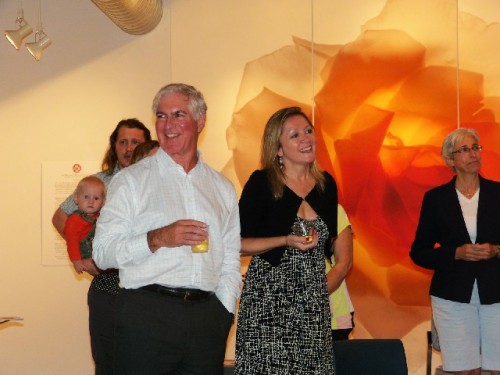 Standing in front of the scanography of Chad Kleitsch. 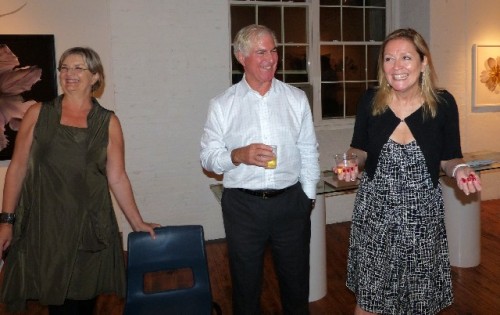 From the left Susan Baker, Tim Montgomery, and Rita A Fucillo. 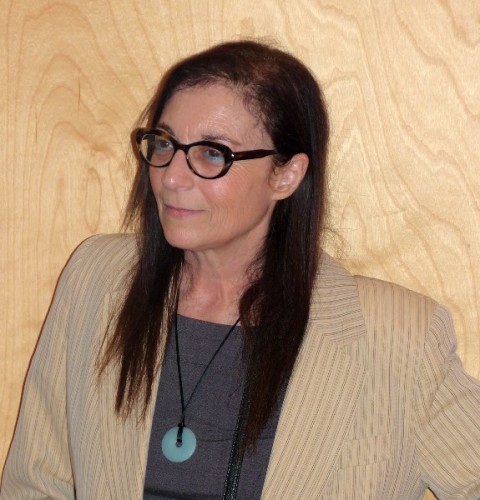 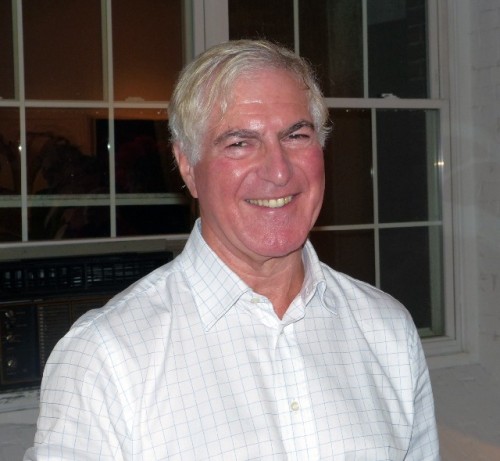 Publisher Montgomery started with the Rock of Boston, WBCN. 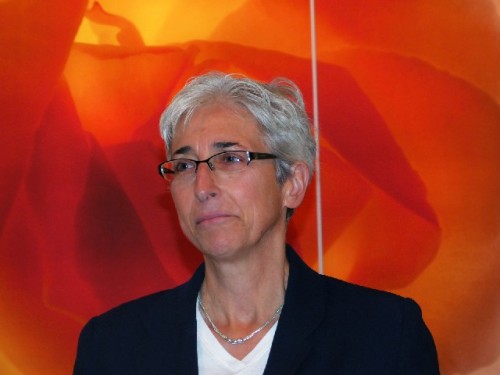 Since the 1970s, when it was founded by Carla Munsat and Stephanie Adelman, Art New England has endured as the foremost regional publication of its kind.

For many years I was a contributor, columnist and occasional guest editor. When the publication eventually was sold, some years ago, that relationship became sporadic. The inconsistencies of publishing in the arts led to establishing Berkshire Fine Arts in 2006.

Last night I was reminded of how much I miss me mates.

In the latest, September/ October edition of ANE there is a section devoted to the visual arts in the Berkshires. To celebrate there was a reception hosted by the Eclipse Mill Gallery.

It was great to catch up and swap tales with publisher Tim Montgomery.

We go back. Way back. No way, way back when we were all so terribly young, wild and crazy.

Well, actually, that describes me more than Tim.

He was, however, in the thick of things in the advertising department of the legendary Rock of Boston, WBCN.

We laughed about how he scoured the index looking for his name in the recent book by former DJ, Carter Alan, who has published a history of the alternative rock pioneer of FM radio. The station barely survived when nobody really listened to FM. You had to have a special radio.

The founder of the station, the eccentric T. Mitchell Hastings, experimented with every conceivable format. Until that historic evening when Peter Wolf, later the lead singer of the J. Geils Band, broadcast after midnight from a dressing room of the former rock club The Boston Tea Party.

Eventually, things got ugly when the station was sold and there was a strike. As Tim reminded me it was time to bail and he moved over to Kiss 108.

Somehow, he can’t quite recall just how and why, he acquired the art magazine in addition to publishing the Boston franchise of Playbill the programs in theatres.

Joining Montgomery in North Adams were the editor, Judith Tolnick Champa, Rita A. Fucillo, the Vice President of Publishing, and Susan Baker who sells advertising.

It was surprising that the meeting was held in the Eclipse Mill Gallery and not at Mass MoCA or some more prestigious venue.

Actually, it was a great opportunity for ANE to become aware of a grass roots, artist run venue which is one of the finest, non museum spaces in New England. Over the past few years there have often been museum quality exhibitions that have gotten little or no media attention.

The current exhibition, especially designed and installed for the space, presents the scanography of Chad Kleitsch. Using a flatbed scanner as one would a camera the artist creates high resolution images some at monumental scale with stunning details.

The exhibition has been curated by Ralph Brill who operates a gallery in the artist mill complex. Recently, the artist provided a discussion of his work for an attentive gathering.

The reception provided an occasion for the arts publication to become more aware of a growing community of artists in the Berkshires. While the major institutions- Mass MoCA, The Clark Art Institute, Williams College Museum of Art, Berkshire Museum and Norman Rockwell Museum- get their share of media efforts by Berkshire artists get little or none.

Significantly, none of those institutions were present for the meeting with ANE. A notable exception was Susan Strano of the Bennington Museum.

Not only does the Eclipse Mill rarely receive any coverage by the local media this past summer there was even less. The Berkshire Eagle in season has a weekly pullout tabloid devoted to the arts. For a couple of years that included the scholarly gallery and non profit reviews by Keith Shaw who holds a Ph.D. in art history. He was fired this summer by Kate Abbott who covers his former beat with the occasional puff piece.

Once there was little art coverage and now there is none.

We loved reading Keith although we often debated his taste and opinions.

It is a part of the conundrum of trying to sustain grass roots, artist run creative efforts.

At some point there is inevitable burn out when the same few individuals carry the burden of keeping programs running.

What’s the point when there is no media coverage, slight attendance, and few if any sales?

State Representative Gail Cariddi was in the room when these issues were raised. She serves on a committee promoting the arts.

The Governor, Deval Patrick, is a Berkshire resident who is seen at the theatre during high season. Some years ago I participated in a series of exhibitions, organized by gallerist Michael Beauchemin, in the office of then Congressman Ed Markey. So there is some history indicating an interest in supporting the visual arts. The point was raised that some states and their arts councils are active in the Art in Embassies program. Phil Sellers pointed out that when they resided in Ohio there were two major artist organizations that were at least fifty years old. Here in Massachusetts there are none.

Montgomery commented that ANE sells well in Ohio as well as New York and Pennsylvania.

Gail Sellers wanted to know about circulation and distribution.

On this occasion we had the ear of ANE and made a pitch for their support.

Everyone thinks it’s a good idea.

They always do. But it’s hard to help artists who show little or no interest in helping themselves.

It’s great that ANE came and met with artists. That’s a positive step in the right direction.