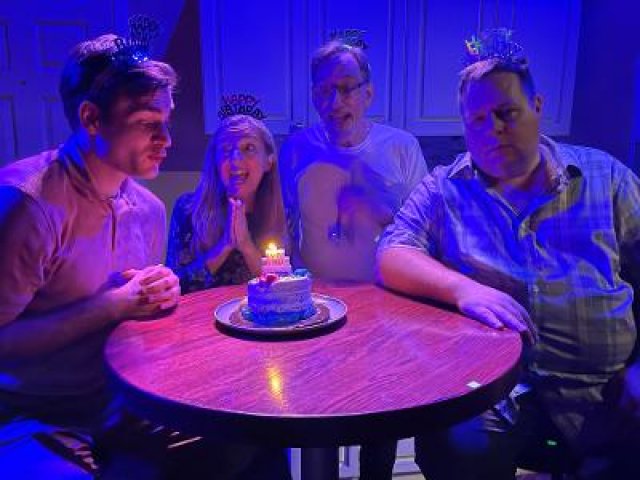 Photo by Jeff Walters “Actor Jay” (Chad Raven) prepares to blow out his birthday candles during a scene from Ronnie Larsen’s comedy-drama The Actors. Pictured from left to right are “Actor Jay, Jean (Jeni Hacker), Clarence (David Kwiat), and Larsen. 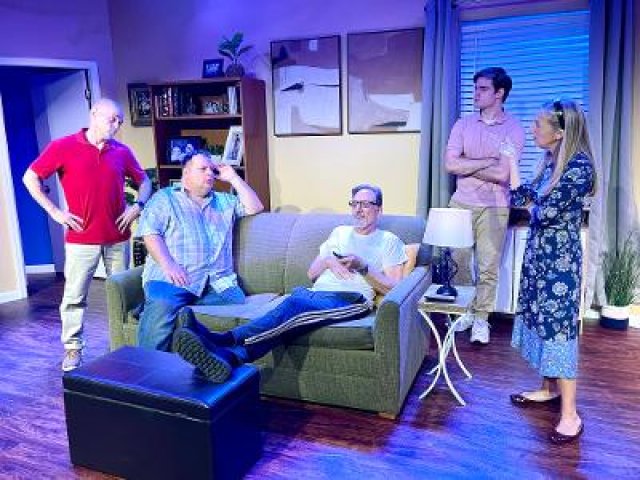 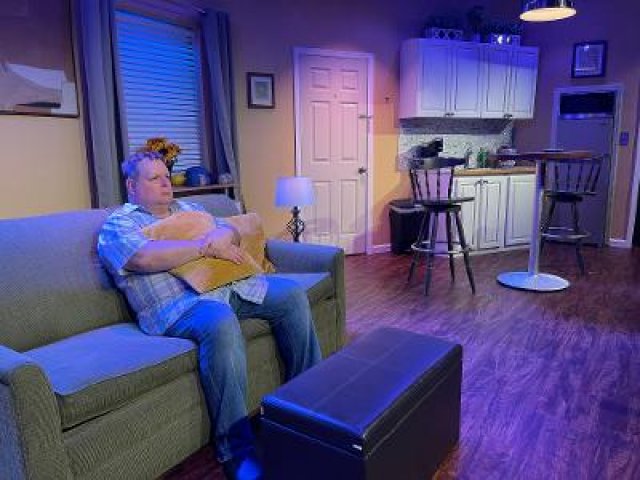 Photo by Jeff Walters Ronnie Larsen (as himself, perhaps) is alone in his apartment before his hired “family” pretended to be his relatives.

Contrastingly, one of Larsen’s newer plays, The Actors, would probably receive a “PG” or “PG-13” rating. It might even be rated G. However, this play contains thought-provoking and deep material that young children might not fully appreciate or comprehend. But, by all means, feel free to bring your pre-teens to The Actors. It is a pure, touching and funny, multi-layered, unpredictable play with plot twists. And it is receiving a commendable professional production through Oct. 2. The venue is the intimate Foundry space within the Wilton Theatre Factory in the Ft. Lauderdale suburb of Wilton Manors.

The Actors, with hints of Pirandello and Shakespeare, is about the similarities between real life and live theater, and how the lines separating them can blur or even disappear. In addition, this meaty play touches on themes such as reconciliation, the ethics behind portraying real people who are alive, the healing power of live theater, the complexity of families and the mourning process, ethics in the workplace, the difficulty of keeping information private in our high-tech world, and the “fixed” nature of families; you cannot shape them to fit your preferences.

True, Larsen packs a lot into his two-hour-plus play (including an intermission). However, to Larsen’s credit, the piece is focused; there is hardly a wasted word or moment.

Larsen does not specify a setting, but this only reinforces the play’s universality. Indeed, the events in the piece can happen anywhere, at any time. With that said, it is fair to conclude that The Actors takes place during modern times.

In the play, a middle age man, also named Ronnie Larsen, is overcome with grief even after time passes following his parents’ death. Further, the character is an atheist, so he has a difficult time believing in concepts such as an afterlife.

Actually, Larsen just wants his folks back. So, he hires actors to portray his parents for a few hours each week in an undertaking he calls “The Project.” But when one of the actors starts referring to Larsen as his son even when those hours are up, lines between reality and fantasy begin to blur. Further, the actors’ personal lives and desires begin to conflict with Larsen’s goals for “The Project.” The atmosphere becomes particularly tense when one of Larsen’s real-life family members enters the scene. Accusations fly — the kind that you might have heard in a “dysfunctional family” dramady. But Larsen (the playwright) balances tense scenes with quieter, more contemplative ones.

There are also humorous scenes. Some are sarcastic, while others make The Actors seem like a love letter to live theater. Surely, if you are a live theater fan, you will delight in this play’s metatheatrical treats. Clearly, from his writing, Larsen is knowledgeable about and loves the theater.

Speaking of reality, it can often seem like live theater without us even knowing it. Shakespeare elaborated on this in the “All the world’s a stage” speech from his play, As You Like It. In The Actors, Larsen also reminds us how live theater is not only similar to real life, but contains power that we can utilize to better our lives and the world.

“Art can heal,” Jean, the actor who plays Larsen’s mother, tells him. “I truly believe that. Theater can heal you. What if I wrote something…what if I wrote a play or something inspired by my experiences here…and I changed the names so nobody knew…what if I wrote a play and the play was a hit and it was performed all over the world and hundreds of actors played you and your parents in different productions. And you could go see the productions and see your parents on stage.

“They could live on thru the play. It’s a way of bringing them back to life, in a way, don’t ya think? Theater is life. Film, paintings, books…they get finished and frozen at some point but a play is a living thing and it could be performed forever. You and your parents could live together on stage even after you die. Isn’t that a beautiful thought?”

While Larsen has beautifully written parts of The Actors, the piece is not flawless. For instance, we never learn what Larsen (the character in the play) either does for a living or wishes he could do as a career. If we learned this information, Larsen might become a more identifiable, fleshed-out character for whom it is easier to pull.

Another shortcoming is that it is never clear whether Larsen is playing himself or just a fictional character who happens to also be named “Ronnie Larsen.”

Also, during one of the scenes, Jean, as Larsen’s pretend mother, realizes she needs to get to the hospital; her water just broke. And, so, she leaves. The next second she walks through the door with the son she was just carrying. Only now, he is a teenager. Huh? And there is no indication in the script or in the production that 16 years have passed between the scenes.

Even with its flaws, The Actors marks yet another triumph for Larsen. He is an actor, director, playwright, and producer whose work audiences in most major American cities have seen. Twenty-four of his shows have received productions, five of them Off-Broadway in New York. In addition, audiences in Canada, Australia, Italy, and London have seen Larsen’s plays.

The Actors world-premiered at The Hive Collaborative, a theater company in Utah. The play won that company’s inaugural production contest.

“After productions in Utah and Michigan, we’re finally doing it here with a dream director, Stuart Meltzer, and a fabulous cast,” Larsen wrote on Facebook.

Speaking of Meltzer, he directs with an attention to detail, and the production moves fluidly. It includes impactful pauses, and we consistently sense sincere emotion from the cast.  In addition, the cast demonstrates deft comic timing.

As an actor, Larsen performs with a convincing desperation to have his character’s parents back. Also, you keenly sense the character’s frustration when things do not go his way. Also, Larsen’s big emotional moments are believable without appearing forced.

Larsen is also credible when he plays himself as a child (this would be a good time for the character to talk about his dream job). It would be easier to root for Larsen if we knew more about the character, such as his ambitions in life.

Meanwhile, Jerry Seeger portrays Larsen’s brother, Jay, with a directness that befits the character’s blunt personality. Also, Seeger softens his character considerably during appropriate times. In fact, toward the end, we feel the closeness between the two previously estranged siblings.

While Seeger plays “Real Jay” (Larsen’s brother) Chad Raven credibly portrays “Actor Jay,” a performer whom Larsen hires to play him. Raven imbues “Actor Jay” with curiosity and enthusiasm, making him seem like a person with whom it is easy to get along.

Jeni Hacker plays Jean, the actor hired to play Larsen’s mother, at first with a nervous, impatient demeanor. But Hacker also injects Jean with compassion and a mother’s affection.

David Kwiat, an actor with dark hair and wide, expressive dark eyes, lends Clarence a playful aura at times. During other moments, his Clarence is stern and commanding. Clarence is the performer whom Larsen hires to portray his father.

The Actors is not the only play that Larsen has written without risqué material. He also eloquently and touchingly wrote a 1920’s-set fictional musical titled Come Out! Come Out! That piece also played in Wilton Manors and is Off-Broadway-bound. The musical focuses on gay people meeting in Central Park for clandestine trysts during a time when homosexual activity could land one in jail.

The Actors runs through Oct. 2 as a Ronnie Larsen Presents production in the intimate Foundry space in Wilton Manors, 2306 N. Dixie Highway. Show times are at 8 p.m. Wednesday through Saturday, as well as 3 p.m. Sunday. Premium seating is $50, while discounted tickets cost $25. For more information, go to www.ronnielarsen.com. And to buy tickets, go ueto https://www.tickettailor.com/events/ronnielarsenpresents/728657.