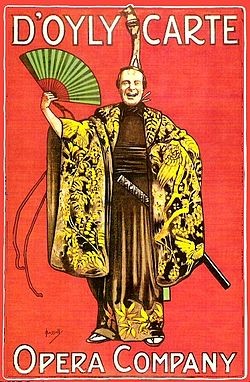 A 19th Century Illustration of Three Little Maids are We. 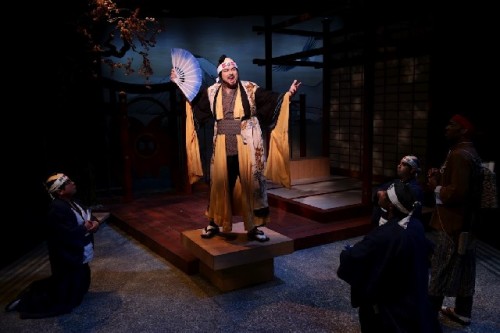 Rishi Basu and cast of The Mikado. Photo by Mark S. Howard. 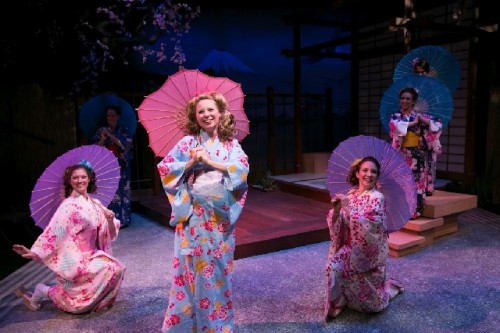 Erica Spyres (Yum-Yum) and cast of The Mikado at The Lyric Stage. Photo by Mark s. Howard 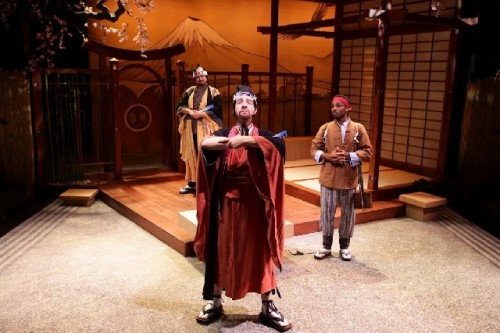 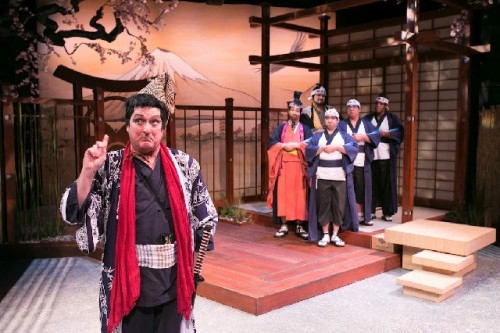 Bob Jolly as Ko-Ko and cast. 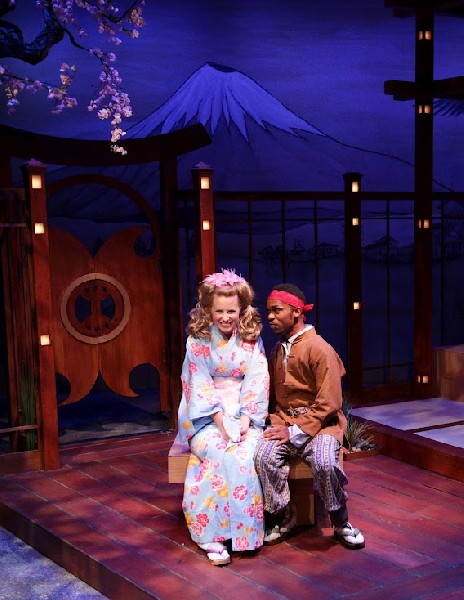 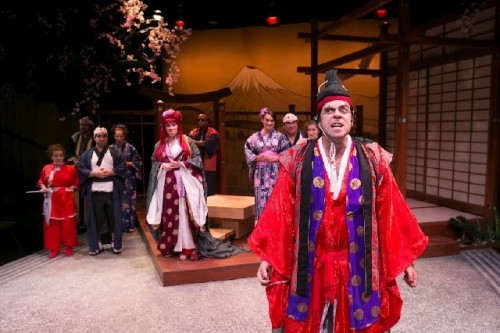 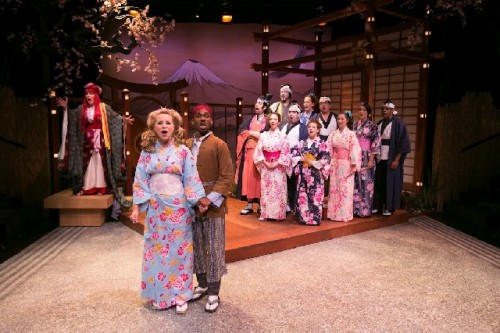 When the words Gilbert and Sullivan are spoken, we automatically smile inwardly and outwardly. There is a joy, no outright feeling of fun, to their theatrical productions that supercedes time, space and stylistic notions.

Opening its 39th Season, the Lyric Stage Company is presenting a melodious and clever The Mikado. This is Gilbert and Sullivan's most popular production. W.S. Gilbert wrote the words and Sir Arthur Sullivan composed the music. It has been entertaining audiences for over 125 years.

My friend and colleague Larry Murray refers to it correctly as an evergreen show that looks and feels fresh each time that it is performed. Cleverly directed and staged by the Lyrics' impresario Spiro Veloudosâ€¨, it is full of strong music, spectacle, rhyming and dance that resonates politically and humanly today as well as it did in the late 19th Century.

Gilbert and Sullivan's works are often referred to as operettas. This is supposed to be a lesser form of opera. But, the voices, staging and production values of their pieces are no less magnificent than formal operas. Also, they have a popularism that opera only achieves in certain places. They were the forerunners of modern musicals. In this Lyric Stage Company production of The Mikado, the majority of the voices are superb and the production values are elegant as well as eloquent.

The Mikado is set in the fanciful Japanese town of Titipu. The story involves three lovely little maids from school, a wandering minstrel with a hidden past, a pompous government official who holds many offices simultaneously and often in contradiction to each other, and an accidental Lord High Executioner.

The Mikado focuses on the beautiful school girl Yum-Yum who is engaged to be married to Ko-Ko, the less than appealing Lord High Executioner. However, she is in love with the wandering minstrel, Nanki-Poo. And the show then works out through music and dance the how and why of the narrative resolution.

Gilbert and Sullivan were particularly adept at reflecting 19th Century folkways and mores of the then British Empire and its cumbersome bureaucracy. This Lyric Stage production cleverly and more than amusingly intersperses aspects of our current political environment and impending 2012 elections into the often silly narrative. All is done in not so pithy but quite witty rhymes.

Outstanding performances were turned in by many of the talented cast. Davron S. Monroe is in magnificent voice as Nanki-Poo. David Kravitz's Pooh-Bah, the Lord High Everything Else, is spectacular both in comedic gesture and strong clear voice. Rishi Basu as Pish-Tush was powerful in presence and song. Erica Spyres is lovely in gesture and voice as Yum-Yum.

The audience could not take their eyes off of either Timothy John Smith as The Mikado of Japan or Leigh Barrett as Katisha when they were on stage. Appropriately eating the scenery, both were quite powerful performers. For some reason, the least effective character was Bob Jolly's portrayal of Ko-Ko. Looking like he just got up from a disturbed nap, he was either miscast or forgot to take his energy supplements.

The chorus was a constant pleasure as were the orchestrated instrumentalists. The music was often a wall of audio delight. Jon Goldberg did a masterful job of musical direction. The set by Janie Howland is elegant while somewhat minimal. But it works well. Costume Design by Rafael Jaen and Lighting Design by Karen Perlow were pleasing to the eye and graceful as well.

Smart and often sassy with great production values and magnificent vocalizations, this Lyric Stage Company of Boston's production of The Mikado is wonderfully entertaining and simply fun. Gilbert and Sullivan's work brilliantly still resonates today. The outstanding cast and crew of the Lyric make this theatrical experience a treat for all ages to savor. Humming and singing afterwards is to be expected.