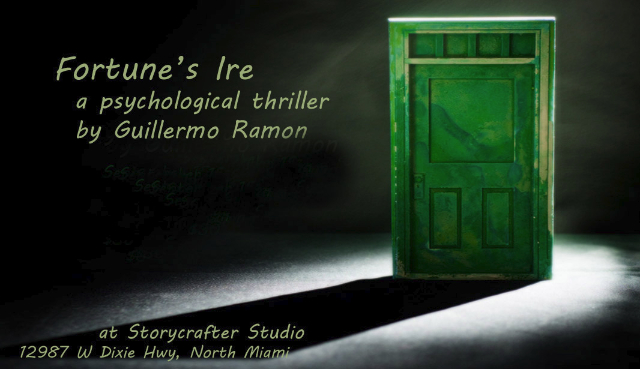 Both plays begin seemingly harmless: In Katori Hall’s shocker, King spends his last night alive in a Memphis motel and receives a visit from a housekeeper. But is that who she really is?

Similarly, “Fortune’s Ire’s,” characters are hardly who they claim to be.

The captivating play is on stage in North Miami’s intimate Storycrafter Studio space, through September 25, in a finely acted and directed production. It begins with an interesting but seemingly harmless premise: A woman who claims to be suffering from amnesia steps into a psychologist’s office to receive help in figuring out her identity.

The therapist’s real job will cause your jaw to drop. Meanwhile, the problem with which the patient is plagued is much graver than not remembering her name or where she last left her keys.

Like with any good thriller/mystery, Ramon slowly but surely peels away at the seeming normality of the situation, revealing its oddities. As the play hurtles toward its denouement we’re blindsided by shocking revelations—the kind mystery writer Mary Higgins Clark might drop on her readers.

Ramon’s play might raise eyebrows, but it also might lower them to form furrows as, deep in thought, you struggle to make sense of what you just saw. That’s particularly true toward the end of the script which, under Ramon and Cynthia Joyce Clay’s direction, breezes by at about an hour. The play unfolds in real time, with no breaks, so the reveals will come quickly and before you know it, they’ll be over. Therefore, it’s critical to pay close attention without any distractions.

Barring any unwelcome distractions, Ramon’s play will keep you riveted thanks to exchanges such as these:
Sam (the pscyhcologist): The ones who are pigs, do they deserve to die?

Kim: Again, what kind of a therapist are you?

This last line and others heighten the mystery of who Sam could be, as she continues to ask odd questions.

Ramon’s writing includes a touch of irony (elaborating would give away too much) and the playwright proves to be a clever writer. The line “the best way to trigger back memories is with a shock” comes shortly after Kim has taken out a small gun from her purse.

There are a couple of lines that Ramon needs to cut.

“Do I look like I am the store clerk’s wife?” Kim asks at one point.

“No,” Sam responds. "How is a store clerk’s wife supposed to look?"

Also, the play’s very last line remains confusing even after reading the script.

On a positive note “Fortune’s Ire” manages to weave in at least one timely issue without veering off track.

“Of course I focused on the gun,” Kim says at one point. “Guns kill!” To which Sam replies, “That’s not what the NRA says. So, now we know that you have a gun, but you’re not an NRA member. Interesting.”

In this unpredictable play, the unpredictability of war, its often deadly consequences and Post Traumatic Stress Disorder also provide fodder for discussion and thought.

With wide, blazing, dark eyes staring straight ahead, Mora describes in a harrowing voice her supposed experience as a member of the military serving in Iraq. She speaks with such familiarity, you’d think Kim just came back from Iraq.

Speaking of war and guns, Mora’s wide, fiery eyes resemble round darts that threaten to unleash deadly poison into Sam’s forehead as she stares at her in disgust or anger.

Mora is equally adept at convincingly capturing her character’s nervousness and wariness. As she enters the psychologist’s office, her shoulders are tense and she clutches her purse as though it’s armor.

When the appropriate time comes, Mora relaxes her shoulders and moves confidently about Sam’s office (designed sparingly, but with enough detail to suggest a therapist’s office).

As Sam, Clay lends a sympathetic demeanor to Sam, while investing her with a confidence bordering on arrogance at others. Clay imbues the therapist with just enough eccentricity to suggest she is, to say the least, not your average psychologist.

Of course, “Fortune’s Ire” is not your typical play. And Storycrafter Studio is not the type of theater you’d expect to enter, if you’re used to auditorium-style seats facing a proscenium stage, partly obscured by a curtain.

The several-month-old, non-profit Storycrafter Studio is run by Ramon and Clay, his wife.

As you walk in, you feel as though you’re entering a store or art gallery; various artworks grace the walls. Audience members sit on couches and loveseats facing a black box-like stage, a plain performance space usually with black walls allowing for simple scenic designs and greater focus on the actors.

In the case of “Fortune’s Ire,” black walls would work well, considering the dark, mysterious nature of the play. But here, the walls are blue, allowing for productions to be more easily filmed. The blue walls appear too inviting and cozy, considering the play’s mood.

By contrast, the costumes, by Clay and Mora, are appropriately dark.

Lighting is where this production could use work. Bright, rainbow-like lights remain on throughout the production. It seems out of character with the play, considering its non-realistic story and aura.

“Fortune’s Ire” could use some work, but it’s a promising play that hopefully will have a bright future.
“Fortune’s Ire”
By Guillermo Ramon
Storycrafter Studio
Sept. 15-18 and Sept. 23-25. 8 p.m. Thursday, Friday and Saturday as well as 3 p.m. Sunday.
12987 West Dixie Highway, North Miami.
Tickets  $30. Log onto www.storycrafterstudio.com.
Back to Front Page Section Home