Antony and Cleopatra by John Adams 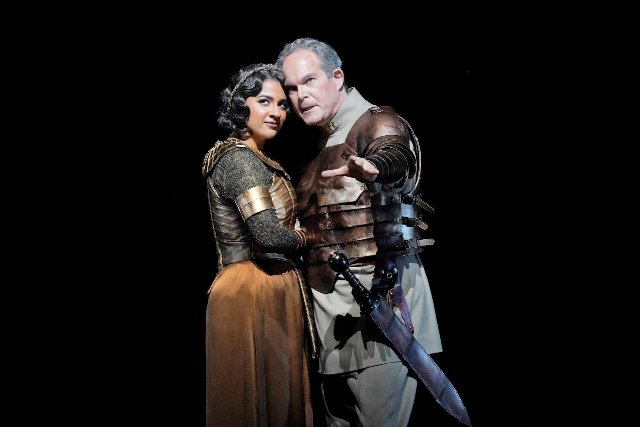 How many people’s knowledge of ancient Rome is substantially defined by Shakespeare’s “Julius Caesar,” possibly through reading it in high school or seeing the play or a film version?  Less famous, but more complex thematically, is what in modern parlance would be called Shakespeare’s sequel to that play.  In addition to the love story and political alliance of the title characters, “Antony and Cleopatra” continues the internecine political intrigues and battles, supplanting the Roman Empire’s First Triumvirate from the first play with the Second Triumvirate.

San Francisco Opera presents the world premiere of John Adams’ “Antony and Cleopatra,” a worthy achievement full of rapture for the eyes and ears from America’s most accomplished living opera composer.  Considerable dramatic tension arises with many escalating moments and painful conflicts in both intimate and grand contexts.  The interaction of the fractured psyches of powerful people playing on the world stage is a regrettably recurring one that lives today in a number of political environs.  Yet, several issues potentially detract from the new opera’s appeal, depending on one’s preferences and perspective.

The composer has been drawn to a wide array of histories as the basis for his librettos – “Nixon in China,” “Doctor Atomic,” and “The Death of Klinghoffer,” the last being notorious for what many consider its anti-Semitic tropes and its laxness toward terrorism.  No such controversy will accompany “Antony and Cleopatra,” but the subject is an interesting choice.

An opera with the same title and source was composed by Samuel Barber with libretto by Franco Zeffirelli for the Metropolitan Opera House opening in 1966.  It was a spectacular flop, driven by bloated production values.  Though the music of these two operas is clearly unrelated, the significant similarity is that both preserve the Bard’s plotline and language as much as possible.  However, Adams wisely avoided experiencing Barber’s version to maintain complete artistic integrity.

The staging of this production deserves special note.  Mimi Lien’s set design under Elkhanah Pulitzer’s direction seems that it might be a little spare at first, because so little of the stage’s capacity is availed.  Only the front portion of the stage is used until an hour into the production, yet powerful images are created in a stunning setting.  As a primary motif, living dioramas are revealed through a seamed black wall that partly opens and closes as a camera lens aperture but with a square rather than round opening (though this effect is not well shown in production photos).  With David Finn’s stark lighting, characters visually pop for a compelling look.  Throughout, the angularity and contrast of the visual stage elements and the boldness of large group scenes create a darkly volatile sense befitting the narrative.

A major artistic story accompanies the opera’s premiere.  The role of Cleopatra was written for Julia Bullock, who had to withdraw due to pregnancy.  Amina Edris stepped in, and with this performance she has solidified her ascent to the largest opera stages in the world.  Although she possesses and displays warm lyric characteristics in her voice, this role demands dramatic quality, which she delivers commandingly as she conveys conditions from courage to cowardice.

Cleopatra’s consort, the weary Mark Antony, has reached the shared pinnacle of power as a triumvir with Octavius Caesar and Lepidus, but Shakespeare’s Antony reveals feet of clay unexpected from an august personage.  In private, his lassitude and devotion to love life suggest a constitution psychologically unfit for the rigors of the highest leadership.  His judgment fails several times when confronting major decisions.  In response to a challenge, he disastrously agrees to battle Octavius Caesar at sea where Caesar holds an advantage, rather than on land.  The accomplished and versatile Gerald Finlay portrays the conflicted Antony with great emotional precision.  Vocally, he accomplishes what is required, but regrettably, the music and libretto don’t lend more opportunity for vocal bravura of which he is capable.

The action is supported by Adams’ score, which is written in modern fashion, with little interest in traditional melodic lines.  One exception is Cleopatra’s lament, in which a simple but touching tune can be heard played in single notes by one instrument.  However, Adams is a master of orchestration, and here, the score excels.  Often, multitudinous rhythms and phrases come from different instrument groups in quick succession, resulting in complex and driving patterns of sound in the background.  Eun Sun Kim conducts with conviction, maintaining orchestral precision through frequent tempo changes and demanding sequences.

Three consequences result from the composer’s trying to replicate the Bard’s intention in the libretto.  Even with surtitles, Elizabethan English can be difficult to digest, especially when it passes by quickly, so it is easy to miss some of the nuance of the story.  Further, despite its psychological and reflective elements, the text is virtually all conversational, leaving little opportunity for arias and less for ensembles which create more vivid music.  Finally, in Adams’ nod to thoroughness, the opera clocks in at almost 3 1/12 hours, which tests the limits for a modern opera.  What’s more, the action in the last half of Act 2 could be comfortably summarized in a couple of sentences, but it goes on considerably at the very time that fast pacing would be most appreciated by the audience.

One final issue is that the opera is set in the 1930s, offering shades of the Hollywood glamor and fascist depravity of that time.  This conceit does allow for the visual appeal of period newsreels projections and a more varied look in Constance Hoffman’s appealing and fashionable costumery, but the conceptual rationale for the time shift is unclear.  Notwithstanding these subjective concerns, the work is an interesting addition to American opera and John Adams’ catalog.

“Antony and Cleopatra” with music by John Adams and libretto by John Adams from William Shakespeare and consultation by Elkhanah Pulitzer and Lucia Scheckner, is produced by San Francisco Opera and plays at War Memorial Opera House, 301 Van Ness Avenue, San Francisco, CA through October 5, 2022.