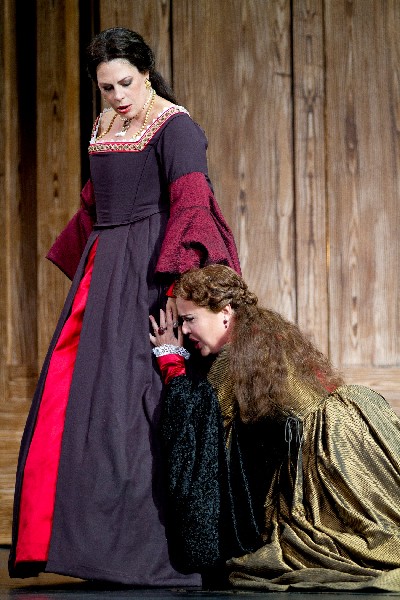 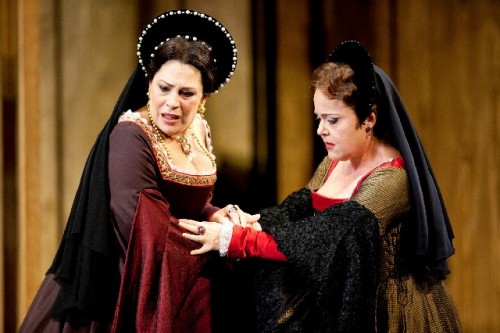 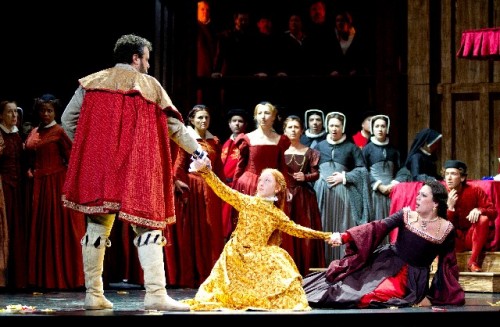 Some say that Elizabeth never married because she was torn in two by her parents.

The Washington National Opera opens its new season with Donizetti’s Anna Bolena.   The incomparable Sondra Radvanovsky, backed up by a stunning cast, sings the title role.

Radvanovsky not only sings with her naturally large and pure voice, but she has conceived the role to fit her vocal characterization into her gestures and expression.  Ranging from a tentative anxiety about the King’s lack of interest, twisting back through her first love for Sir Percy and on to master betrayal by Jane Seymour, the cunning of the sensuous but cruel King, Radvanovsky shows herself to be a consummate singing-actress.

This is a special treat in bel canto, whose plots and storylines are often pooh-poohed.  Not here, however. The librettist Romani instructed the composer once too often that the text is the most important part of any opera. This made it difficult for Donizetti to continue collaborating with this gifted poet.  In Anna Bolena, character depiction is Shakespearean in its depth and the music rides high in the emotional landscape of the story.  Radvanovsky takes advantage of all the drama the creators provide.

Sonia Ganassi is a great Jane Seymour.  Her voice has lovely legato lines, which swell and dip as she turns inside out, tempted by Henry’s offer to make her Queen, but guilty because she is betraying Anne.  She soars in a duet with Henry, and delivers more than her fair share.  In the confrontation with Anne, revelation upon revelation builds to Anne’s final forgiveness.

Percy was sung by Shalva Mukeria, whose timbre revealed a character on the edge, shifting between his love for Anne and the knowledge that his pronouncements risk her life.

The production, originally created for the Dallas Opera, is in the manner of the Globe Theater, where the principal actors are on stage level, supporting characters and chorus often gathered on the balconies, both are a part of the action and observers.

The walls of the stage at stage floor level constantly move to form the court, private rooms, and a jail.  Lawless uses these walls “as though they had ears” whispering walls.  Touches like the deer in the hunting scene and a deer embossed shield add moments of humor to the very dark drama.

Lawless created ensemble performances throughout, singers interacting with each other in intimate scenes, and revealing distinct characters in a sestet near the end of Act I and the trio in Act II.

Mukeria singing Percy was a revelation.  His tenor has an edge which contrasts with the other singers.  It suggests his role in the drama, an edgy outsider who is the spoiler.

Allemandi in his WNO debut conducted to display the singing.  Dramatic emphasis is enhanced by romantic pathos.

Radvanovsky is always in character.  Embellishments add to her defiant farewell.  In the familiar "Home Sweet Home" Anna makes her final peace.  From majestic to accusatory, profound to consoling to ecstatic, this Anna is a triumph.

If Radvanovsky fit her role like a glove, Ruth Bader Ginsberg slithered into her black net glove perfectly as it brushed down a railing dividing the center orchestra. There is plenty of grist for Supreme Court decisions in this opera, which the Washington Supremes were clearly enjoying.