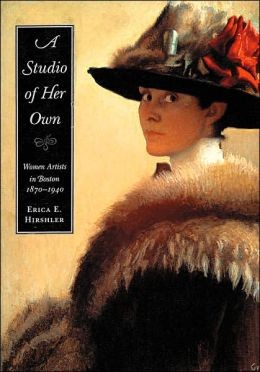 Catalogue of the exhibition 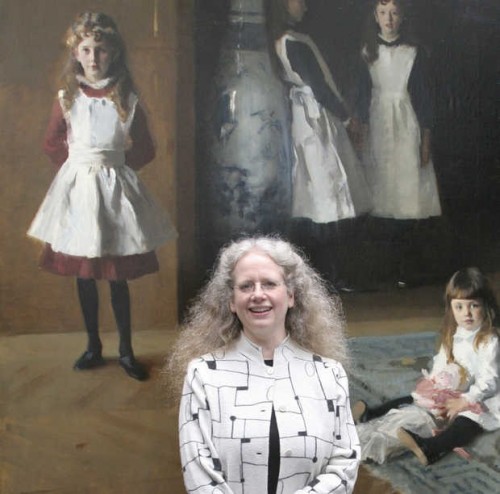 Erica Hirshler curator of the exhibition,. 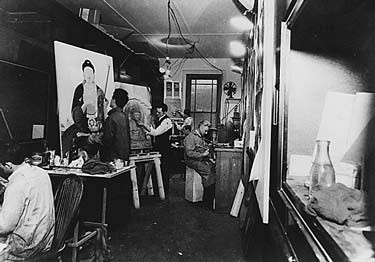 Self portrait by Ellen Day Hale.

A Studio of Her Own: Women Artists in Boston, 1870-1940
Museum of Fine Arts
Curated by Erica Hirshler
August 15 to December Reposted from Maverick Arts Magazine, 2001

If Boston does not record and display its own legacy in the visual arts, then, surely, nobody else will. In that sense, the Museum of Fine Arts and other major institutions, such as the Institute of Contemporary Art, and the DeCordova Museum and Sculpture Park, as well as the network of smaller museums and university art galleries all, potentially, play a vital role in promoting the accomplishments of generations of its artists to a national and international audience.

The operating concept here is that a rising tide raises all ships. That efforts to research and exhibit the accomplishments of one of America’s foremost cultural resource centers will be of direct benefit to all of Boston’s artists and creators, past and present. It adds significant value, both material and aesthetic. An aspect of value is validation and credibility. While Boston will forever live in the broad shadow of New York, these efforts will, perhaps, place the city and its vast and unique accomplishments on a par with second tier cities such as Philadelphia, Chicago, Los Angeles, San Francisco and Washington, D.C.

During certain time frames, and in particular fields and specialties, Boston has been second to none. That is as true today as it has ever been. But in matters of culture, particularly the fine arts, Boston seems to chronically suffer from what Red Sox fans identify as, “The Curse of the Bambino.” Perennial contenders, but never quite winners. Those Damn Yankees.

In chronicling the rich and complex history of the visual arts in Boston, the MFA has done a thorough and consistent job, but within a narrowly confined framework. More on that later. The DeCordova continues to do the best and most important work in this field, but also suffers the consequences, by being marginalized as a regional museum. The kiss of death if you are trying to mount traveling shows with a national audience. And the ICA, which could and should weigh in on this important agenda, has done, well little or nothing. At best, sporadically and half-heartedly. It is a major contemporary arts institution which just happens to be located in Boston. While it begs for our attention and support it offers crumbs and table scraps to its community of starving artists.

The good news then is that this current exhibition, A Studio of Her Own: Women Artists in Boston 1870-1940, adds a significant, scholarly chapter to the study of its artists. The 228 page catalogue that accompanies this exhibition, curated by Erica Hirshler, published by the MFA, $40, hardbound, will be a valued resource for students and scholars. This complements such prior exhibitions and catalogues as, Paul Revere’s Boston: 1735-1818, ( 1975), The Boston Tradition: American Paintings from the Museum of Fine Arts, Boston, (1980), and The Bostonians: Painters of an Elegant Age, 1870-1930 (1986). The MFA has exhibited and published other related exhibitions including retrospectives of such major artists as John Singleton Copley, John Singer Sargent, Martin Johnson Heade, and F. Holland Day.

The bad news is that in contrast to the enormous effort in this exhibition, as was also true in its predecessor, “Painters of an Elegant Age,” the work itself is dominantly, trite, derivative, provincial, sentimental, maudlin and academic. Yawn. It matters not if the hand at the end of the brush in this era is black, white, Native American, gay-straight, male-female, it just isn’t very compelling. And that isn’t just a Boston problem. It is an American problem. With the notable exception of a handful of artists, craftsmen and designers the American Fine Arts in the Gilded Age, of, The American Renaissance, following the Civil War through, take your pick , the 1920s-1940s, were boring at best. American Architeture and decorative arts were, to be sure, first rate. But, in the fine arts we needed to be profoundly shaken up. That happened in 1913 with the Armory Show, and when Americans, most importantly lesbians and gays, returned to America, read Provincetown and Greenwich Village during World War One, or fled to Europe as the Lost Generation between the wars, or emigrated to America during World War Two.

To be fair, Hirshler is organizing an exhibition that focuses on this modernist tradition, The Provincetown White Line Prints, a technique invented by B.J.O. Nordfeldt. This movement, during the era of World War One, included, among others, such interesting and progressive women as Ethel Mars, Maude Squires, Blanche Lazell and Agnes Weinrich. The MFA is also mounting a retrospective of work by Lazell. The market for her work has soared in the past decade. We eagerly anticipate these exhibitions.
After 1930, the arts in Boston, particularly because of its Jewish immigrants, and to a lesser extent its Italian, Irish and Lebanese (Kahlil Gibran) got a lot more complex, and from the viewpoint of the MFA, messy. Its scholarly surveys are always targeted to stop short of including its Jewish immigrant artists, The Boston Expressionists, Hyman Bloom, Jack Levine, Karl Zerbe, David Aronson and their progeny. This chapter has been told by the DeCordova, in a rather flawed effort, and curiously, by the ICA under its now deceased director, Stephen Prokopoff.

No, for the MFA the only good artists are dead artists. Preferably Brahmins. And while this show does the right thing by acknowledging women it wants to be applauded for doing so on its own turf and terms. That still leaves six plus decades, or three generations of artists, disenfranchised. When is the MFA going to tell Our Story. Cosa Nostra. When will we be celebrated for our lifelong commitments and contributions. We couldah been somebody. We couldah been contendahs. What are we. Let’s face it. Bostonians.

During the press tour,my peers seemed to be agog. Perhaps it was the croissants. Mesmerized by the occasional exquisite vase, or superb stained glass window, impressive figure in bronze, plaster heads of and by an African American, well executed figure painting or portrait.

What is lost in  this celebration is modernism which fought the good fight against the academy and liberated artists from the strangle hold of these sentimental traditions. Does it really matter that the pigeon spattered, life size, bronze sculpture in a park of a general on a horse was created by a woman? It is still a general on a horse. Big deal. Unless, of course, it was created by Augustus Saint Gaudens, or Daniel Chester French. During the Gilded Age, all others, regardless of race or sex, need not apply.
Then and now there are artists and creators who struggle against the academy. Theirs is the plaintive voice. But so richly deserving to be heard. They are the unwashed, unbowed and uninvited. But after the ball, as they flee back to their life of drudgery and neglect, they are the ones who drop the glass slipper. Let us hope that when the MFA and ICA get prodded into adding an updated chapter to a noble history they do not attend the ball in disguise.