Survey by DeCordova Museum in 2002 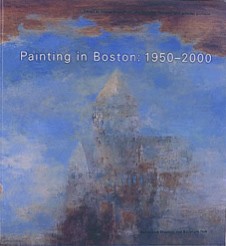 Catalogue of the exhibition. 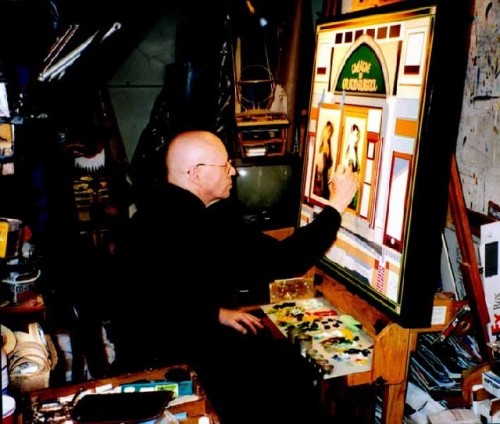 Visionary artist Paul Laffoley was not included in the survey.

Catalogue: 264 pages, illustrated, edited by; Rachel Rosenfield Lafo, Nicholas Capasso, and Jennifer Uhrhane, preface by Paul Master-Karnik, director, with essays by Lafo, Capasso, John Stomberg, Carl Belz, and Ann Wilson Lloyd.
With biographies and bibliographies of the 67 exhibiting artists, as well as a chronology and index. ISBN #1-55849-364-6. Distributed by the University of Massachusetts Press.

On many levels, Painting in Boston: 1950-2000, is the most ambitious and insightful exhibition and publication every organized by the DeCordova Museum and Sculpture Park in suburban, Lincoln, Massachusetts. Under director, Paul Master-Karnik, the museum has identified a mandate to show and collect the modern and contemporary art of New England. This is the second of three shows attempting to create canonical studies of major aspects of art making in Boston, the aesthetic center of New England, during the second half of the 20th century. The project began with, Photography in Boston: 1955-1985, in 2000-2001, and will be completed with, Sculpture in Boston, in 2005.

Ironically, this survey of painting occurs during a time when, if one is to take the curatorial position of the most important recent national and international exhibitions, from the Whitney Biennial through the recent Documenta 11, painting is poorly represented and all but dead. It is better to say, perhaps, that painting is alive and well and flourishing in Boston.
A stroll down Newbury Street, Boston’s mainstream gallery row, reveals a plethora of painting, works on paper, and photography. This represents the heart and soul of the Boston art market. But this tendency is less dominant in the more experimental galleries in Boston’s South End. The passion for painting is counter to the exhibition program of the area’s most progressive museums and institutions from the List Visual Arts Center, at MIT, the Rose Art Museum, the Institute of Contemporary Art, the Fogg Art Museum, and the contemporary program of the Museum of Fine Arts. Nor is it the dominant focus of the most advanced students of the School of the Museum of Fine Arts, Mass. Art, and other leading art schools with the exception of that bastion of painting, the School of Fine Arts at Boston University. A number of BU faculty and students, past and current, are featured in this exhibition.

The DeCordova, its administration and curators, have defined themselves as a regional museum. For this position they have attracted a passionate and grateful audience. In addition to individual and group exhibitions the museum hosts an annual survey of emerging artists drawn from 100 plus studio visits. No other New England institution is more informed or committed to this important work. But it begs the question of defining the difference between regional and provincial. The distinction is the extent to which its curators look only within the limits of its geography to the exclusion of developing a wider national and international vision. In an ideal world the curators might also spend more time in New York or visiting major international exhibitions.
This concern conveys why much of the programming of the DeCordova, however admirable for its commitment and professionalism, strikes me as conservative.

The programming often conveys more heart and soul than a sharp eye. As evidence of that statement, while many of the artists deserve to be included, they are not always represented by their best works. Part of this comes from the fact that 28 of the 75 works on view are drawn from the permanent collection of the museum.

In the case of Henry Schwartz, an artist in the expressionist/ narrative tradition, the museum is showing one of his very best works, “Vienna Blood: Dirty Dancing on the Danube 1888-1938.” On the other hand, some important artists, from Gregory Amenoff to Gyorgy Kepes, are poorly represented by weak paintings from the permanent collection. Much stronger works by these and other similarly treated artists were readily available. This begs the question of whether the museum was attempting to find the best paintings or pursuing an agenda of touting its own holdings.

Let us be absolutely clear, however, that this exhibition included a stunning range of fabulous works. From the early years there were strong examples by Hyman Bloom and Karl Zerbe. In the case of Zerbe, a German born artist and, for many years, the head of the painting department at the Museum School, there was an amazing, semi abstract head of the artist Oskar Kokoschka. From the early 1970s, there was a stunning abstract painting by Katherine Porter one of the best artists of that transitional era. One of the strongest galleries in the exhibition displayed the accomplishments of the 1980s including superb works by figurative/ fantasy/ surreal artists; Robert Ferrandini, Gerry Bergstein, Domingo Barreres and the ultra visionary, Alex Grey. There were terrific works by such seminal BU professors as Philip Guston and currently John Walker. There was a stunning juxtaposition of two realists, formerly teacher and student, later close friends, Barnet Rubenstein and Linda Etcoff.

The impact of some of these remarkable works was undermined by problems with the installation. The curators opted to present the show chronologically. The inadvertent result of this is that the most generous space was devoted to works from the 1950s to 1980s. Here the work looked particularly strong with plenty of breathing room. But the selection of art of the 1990s got compressed into the remaining space. This conveyed a feeling of curatorial ambivalence about recent works about which we are still making up our minds. Several large paintings by Annette Lemieux, Richard Yarde, Kofi Kayiga and Ahmed Abdullah were crammed together in the most claustrophobic of the museum’s galleries.

It would have made more sense to derive an installation in which large works were hung in large spaces and small works in smaller spaces. Insisting strictly on chronology created a disproportionate distribution of space for all five decades of this survey. In this case the 1990s clearly got the shaft.

Then there is the matter of inclusion and exclusion. It is always tempting to second guess curators. While standing by its selection of works and artists the DeCordova hopes that this project will stimulate debate and other projects. But this is unlikely to happen. The MFA and ICA have been notorious in their indifference to modern and contemporary art in Boston.
Because no other major institution has challenged the selections of the DeCordova this represents the undisputed canon of Boston painting for five decades. Its list of 67 artists forms the basis for further discussion and debate. In creating this canon, particularly with artists in the earliest decades, the curators have come close to consensus. They have been thorough and, in their research, they consulted a broad range of artists, curators, critics and collectors.

Accordingly, for about two thirds of the exhibition I agree with their selections. They mostly got it right. Which is of course just my opinion. But, for me, the other third of the show is debatable. The curators have argued in print, as well as to me personally, that their reasons were entirely aesthetic. But all aspects of the catalogue from essays to its extensive chronology, footnotes and bibliography reveal an intense involvement with telling the social and institutional history of the period.

A scrutiny of the list indicates that there are artists included for reasons other than aesthetic. They are justified in the context of the history. Then there are artists who were important aspects of the history who were excluded by the standards of aesthetics.
These are murky, tempting waters to navigate but without a paddle. For example, Dana Chandler, Jr., an African American mover and shaker of the late 1960s and 1970s has been prominently included. His work does not hold up to the argument of aesthetics. But, another equally notable, political painter of the same period, Arnold Trachtman, is not on view. Why include one political artist but not the other?

In the important movement of the Studio Coalition of the late 1960s, Andrew Tavarelli emerged as an important artist who was included in a Whitney Biennial of that era. He belongs here as a contributor to that history. The visionary artist, Alex Grey was included, but the equally important, Paul Laffoley, was not. The exhibit includes two of the three Epic Abstractionists, John McNamara and Roger Kizik, but not Rick Harlow. From the seminal Smart Duckys, Todd McKie is included but not his partner, who went on to a career in Hollywood, Martin Mull. Their, Flush With the Walls, guerrilla exhibition in the men’s room of the Museum of Fine Arts crumbled that institution’s resistance to contemporary art in 1971. Shortly after that conceptual attack on the funny bone of the MFA it announced the formation of a department of contemporary art with Kenworth Moffett as its curator. Mull deserves to be remembered for that if no other reason. He is also a terrific artist.

The museum included a magnificent self portrait by Gregory Gillespie who took his life a couple of years ago. Great artist but he lived in Northampton and was never really a part of the Boston school. If they credentialed him as an ersatz Bostonian why not consider the other Northampton realists, Jane Lund, Randal Diehl, and the deceased Frances Gillespie. Where are such strong Boston figurative and realist artists as: Paul Rahilly, Peter Plamondon, Joel Janowitz, Harry Bartnick, Richard Sheehan, Miroslav Antic and Suzanne Vincent? In another area of great strength in Boston painting where are Thaddeus Beal, David Moore and David Palmer? It would have been interesting to see their work in a context with such superb painters as David Ortins, Ellen Gallagher, Bill Thompson, Irene Valincius and others. The curators also ignored two artists who were widely viewed as a phenomenon, Alfonse Borysewicz, and Adam Cvijanowicz.

All of these excluded artists together might make an interesting salon des refuses. And the DeCordova would be correct in encouraging such efforts to identify and organize alternative projects.

One final thought focuses on the difficulty of defining just who is a Boston artist. From the very earliest decades of the exhibition many of the strongest artists have been immigrants, for example, the great teachers, Karl Zerbe and Gyorgy Kepes, at the Museum School and MIT. This is evident also in the most recent work by artists such as Ahmed Abdalla and Ambreem Butt. There is another theme of artists who have relocated here to teach from Friedel Dzubas to Philip Guston, John Walker, James Weeks and John Moore. It seems that Boston is constantly revitalized by faculty and students passing through or relocating here.

Bottom line: Boston loves painting. Always has. Always will. That’s the good news. Question is beyond the city limits, in the greater national and international art world, is Boston painting equally loved as much as it loves itself.

The DeCordova has provided us with a solid and well crafted document. For this we are greatly in their debt. But, in the larger scheme of things, hey man, it’s a jungle out there.