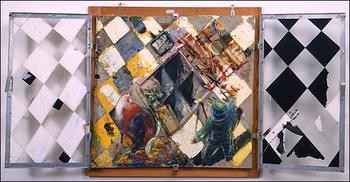 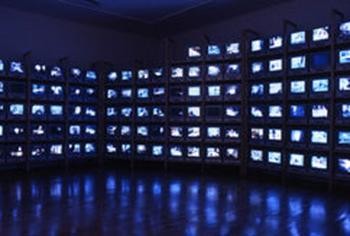 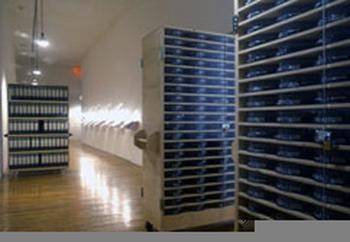 A rare opportunity to see work by a major artist in depth.

Never has it been more true that one man’s treasure is another man’s trash than in the sprawling, daunting and all consuming exhibition, “Roth Time: A Dieter Roth Retrospective,” on view through June 7, simultaneously at the Museum of Modern Art and P.S. 1, which are located about a twenty minute walk from each other in Queens, New York.

Recently, I devoted a day to taking in the double header. I am still in a state of total shock, recovery and anxiety. Rarely in my life has an exhibition left me so exhilarated and inspired as well as shocked, shattered and emotionally exhausted. It may well take a lifetime to sort through, recycle, absorb and recover from this experience. It is an example of what Germans call Gesamtkunstwerk. Roughly, total art work. It may prove, with time, to be the most important New York exhibition of contemporary art since the Joseph Beuys retrospective at the Guggenheim Museum.

Just when we seem to finally have a handle on understanding the multivalence of Beuys, along comes yet another paradigmatic German artist. An Ubermensch compared to whom titans such as Richter, Kiefer and Polke dwarf in significance.

There is, however, no way to keep clean in this total experience of Roth. You have to dive into piles of shit and get dirty and smelly. The work is about decay. So much that he explored has turned to compost. Sure, it stinks. It reeks. It can be revolting. But it is also life. In that aspect the work of Roth is fertile, rich and florid.

One imagines that it would be a nightmare to be an executor of his estate. Just how to decide what to keep, archive, and preserve and what to discard as worthless trash. Roth opted to keep just about everything from banana peels to cigarette butts. It is up to the viewer to deconstruct the experience. Not surprisingly, the reviews have ranged from respectful to repulsed. Roth is one of those exceptional artists who provoke all possible responses. It is a test of how far we are willing to go. Just how much are we willing to take before crying uncle? It is the art equivalent of the famous Milgram experiments documented in his study, “Obedience to Authority.” What is the difference between the viewer’s real pain and agony or just faking it?

Nowhere is that more true than in the top floor of P.S. I that comprises several sprawling installations of everything and the kitchen sink.

With due diligence I sat through what appeared to be a complete cycle of a number of simultaneously projected slides selected from the series, 1973-75 and 1990-93, comprising 30,000 slides of all the buildings in Reykjavik, Iceland, the artist’s home of many years. There was a numbing sameness to these artless images. The notion was to be immersed, for a finite time in a selection of these deadpan documentary images. Even having endured a complete rotation of the multiple projected images there was the reality of having sampled only a fraction of the material. There were cabinets displayed containing rows upon rows of carousels of the complete series.

Similarly, one passed time turning the pages of loose leaf binders, attached to a long viewing table that presented a sample of archived material objects. Again there were endless volumes of these binders. The sensibility is that of a fairy tale in which having spun a pile of straw into gold on each subsequent evening the pile of straw grows every larger. In real life, however, there is no helpful elf to turn it all into gold while we sleep. We are on our own to determine the duration of our patience and endurance.
Coping with the experience we grapple with the notion of whether this is art or just total madness. Is this the worst possible instance of obsessive compulsive disorder? But to answer that would take skills in a discipline in which I have no training. So, as a mere art critic, I was forced to stagger on to the next room of this increasingly nightmarish but totally absorbing experience. Had I time and the necessary powers I would have conjured up the shades of Dante and Virgil to help me navigate through the next circles of this artist’s private heaven or hell.

Which spun me out into the gallery that comprises Solo Szenen (1997-98) created in the time shortly before the artist’s death (1930-1998) when the artist was confined primarily to his home and studio in Reykjavik. There are three racks of some 131 video monitors which simultaneously display the artist’s daily routines in real time. The activities which are thus recorded are numbingly routine. We see an elderly, gray and corpulent Roth working, eating, sleeping and sitting on the can. I found myself viewing attentively, who knows way, the manner in which he tore off and carefully folded a length of paper prior to reaching under and wiping his ass. Yes folks, ass wiping as a work of art. Apparently we have come a long way from the opening word “Merde” from Alfred Jarry’s absurd play “Pere Ubu.”

Not that I am being deliberately coarse and vulgar. In fact, his first published work was called, “Shit, New Poems by Dieter Roth.” Nor is he the only artist to be so inspired by excrement. Recall the cans of artist’s shit preserved by the Italian conceptualist, Manzoni. Or the infamous elephant dung used by British artist Chris Ofilli that so angered Mayor Rudolph Giuliani. Think of the piss, blood and come in the photographs of Andres Serrano and the large silvered vessels of bodily fluids by Kiki Smith. But, one may argue, in the case of Roth, never has shit looked so shitty.

In all of this carefully preserved stuff one may also reference Roman Catholicism and its fetish for relics. The bones of this and that saint. That concept has to come into this discourse on some level. If those slivers of saints have healing powers then why not all this crap from Roth, or the shamanism of Beuys and his quasi mystical fixations on felt, fat and rabbit blood? What about the blood paintings and ritual actions of Hermann Nitsch and the Vienna Actionists? Or, more recently, the brutal, sado masochism of Mel Gibson’s “Passion?”

While the life and career of Roth culminated in total creativity, madness, genius, garbage, whatever, this exhibition, specifically the component at MoMA, reveals to us the complex road that the artist pursued to reach that final explosion. Mad genius, it would appear, is made or evolved not born.

During the Nazi years, the artist managed to travel to and remain in Switzerland where the family eventually joined him. There is a hint of the importance of this in a work from 1947 “Pimpfe mit Fahne” a small woodcut of a group of faceless people marching in the street under what appears to be an SS banner. From those early years are benign landscapes and works that show the influence of Paul Klee. By the mid 1950s through early 1960s he created austere, formal, abstract graphics in the Constructivist/ Op manner. He experimented in kinetic interactive pieces in which the viewer is invited to operate moving parts that result in moiré designs. The museum, however, warned visitors not to touch so there was no way to test these concepts.

By 1965, remarkably, he spent time teaching at the Rhode Island School of Design. The work became more experimental and he began to use chocolate. spices and food as a material for painting and sculpture. Just as Beuys used fat, honey and other non art elements. There were also graphic works, books, music, poems and eventually, under the influence of Tinguely and Rauschenberg, multi media collages, assemblages, performances and sculptures.

Much of the work created with these exotic materials are in varying states of decay. The artist insisted for this to run its course. Under the supervision of his son Bjorg, however, a series of the small chocolate heads have been recast to make a recreation of the stacked sculptures using levels of the heads between large plates of glass. Eventually like Humpty Dumpty they will all fall down but by then the exhibition will be but a memory.

All this stuff will be carefully packed up and put away. But will we ever be the same?

The sad point is that relatively few people will actually see this exhibition. It is never likely to be duplicated. There will be no second chance to rethink this experience. Bits and pieces may resurface but never this sweeping, all embracing overview. We will be back to where we were before. Having the occasional tantalizing glimpse. Like a couple of summers ago at Documenta which included an installation of the late studio as well as a room with double rows of simultaneous projectors. Touring German museums that summer we saw works here and there. It whets our appetite but hardly prepared us for this total assault on the senses.

In the future, students and scholars will depend upon the reviews. They will be largely misled and disappointed. Why, in a mostly perceptive piece in the NY Times, Friday, March 19, 2004 did Roberta Smith write that, “The low point comes in the show’s second half, especially in the gallery dominated by bulky, scabrous assemblages; dense, chaotic, jigsawed combinations of painted wood, found objects and machine parts; tape machines and radios play music that is sometimes Roth’s, sometimes not.
“More interesting to listen to than to look at, these pieces can resemble the collaborative works of untalented admirers of Robert Rauschenberg and Jean Tinguely…” Come on Roberta, there is more to it than that.

Then there is the harsh and contemptuous prose of Donald Kuspit, in Art Net. There is a litany of invective such as, “banal and mechanical,” “tired point,” “academic exercise in the already old avant-garde idea,” “uptight,” “spent his adolescence in neutral Switzerland, which was another kind of living death.” Wow, Kuspit is willing to take out an entire nation just to bash the artist. Does this “philosopher” know no limit?

Comparing the tapestry portrait of the artist (with Ingrid Wiener) 1984-86, to a late Rembrandt self portrait Kuspit states that, “Compared to the self-possessed, dignified Rembrandt, Roth looks like a ham actor, even an imposter-a pretender to the throne of art.” Give me a break. Or, “Roth has given himself an enema and puts the results on display.” It goes on but you get the point. Which makes one wonder just who is full of shit? You decide.