Arthur Miller’s A View from the Bridge 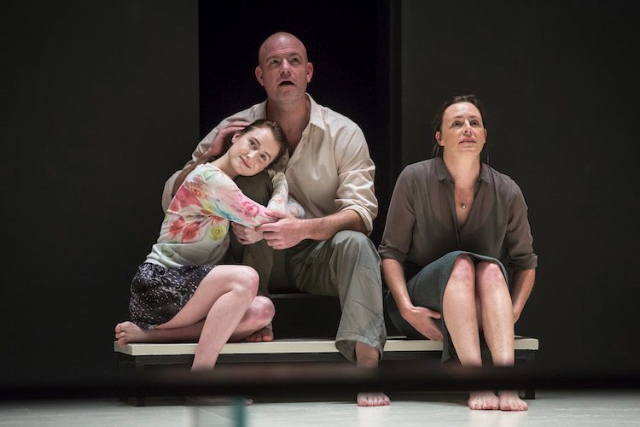 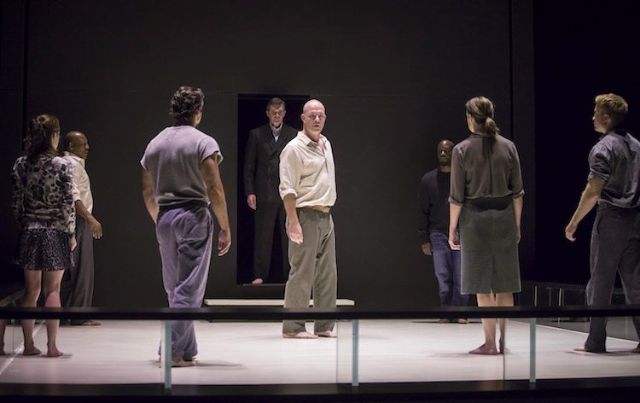 Arthur Miller’s A View from the Bridge is performed on the most minimal of stages with few costume changes (and no shoes), thus proving that it’s really the script and the acting that are the key elements in successful theater. Miller’s powerful story and visceral language make the Goodman Theatre’s production both an emotional family story and a contemporary immigration lesson.

Belgian director Ivo van Hove’s visionary production retains virtually all Miller’s language but places it in a simplified setting that resembles a cage or fighting ring. The bare stage is surrounded on three sides by benches, with a single door at the rear. Miller’s narrator, local lawyer Alfieri (Ezra Knight) is omnipresent and adds poetic transitions to the action. The play is set in Red Hook, Brooklyn, near the docks.

The superb cast is led by Ian Bedford as Eddie Carbone, the longshoreman son of Italian immigrant parents. His wife is Beatrice (Andrus Nichols), whose two cousins are about to arrive from Sicily because Eddie helped them pay for illegal passage and fake seaman’s papers so they can work on the docks. The family picture is completed by Catherine (Catherine Combs), Bea’s niece, who has lived with them since she was a child. Eddie has always been very fond of Catherine; a bit too fond, as you’ll soon notice. And Catherine, although now 20, reacts to Eddie as if she was still a child. Eddie loves Catherine too much and his wife, not enough.

There’s a sense of predestination about the play from the beginning. Ominous music plays during the dimly lit opening scene, as Eddie and Louis (Ronald L. Conner), a coworker, wash up after work. The lighting and music make the simple act of washing seem like a ritual ablution.

Eddie arrives home to learn that Catherine (wearing a new short skirt) has applied for a job and wants to leave stenography school. Bea is encouraging her to do it. Eddie doesn’t approve (it wasn’t his idea) but finally gives in. The two cousins arrive a few days early and the family greets Marco (Brandon Espinoza) and his younger brother Rodolpho (Daniel Abeles). Marco is married with children and looks forward to working and sending all his money back to Sicily. Rodolpho is a bachelor and a free spirit. He and Catherine are immediately attracted to each other, which sets the stage for everything that follows. Rodolpho is a blond Sicilian and a talented singer and cook. Eddie is immediately suspicious. “The guy ain’t right,” is his constant complaint to Beatrice and to Alfieri, when he seeks advice from the lawyer.

Marco proves his strength by working hard as a longshoreman. He also demonstrates it by challenging Eddie in a test of strength: Lifting a chair by one of its legs. Eddie can’t do it. Marco can and raises the chair and holds it above his head triumphantly.

The gripping two-hour play is performed without intermission, only lighting changes to indicate scene transitions—and Alfieri’s occasional commentary. Of Eddie, he says, “He has eyes like tunnels” and “He was as good a man as he had to be.” Sound also very effectively increases the drama. Throughout the last part of the play, percussive tom-tom beats are heard every few seconds.

Eddie Carbone is one of Miller’s powerful characters. There’s a thread connecting Eddie to Willie Loman in Death of a Salesman and Joe Keller in All My Sons. They are all men who yearned to achieve the American dream but failed, through their own actions and circumstances racked up against them. The same throughline connects their wives—Beatrice, Linda Loman and Kate Keller—in their long-suffering love and support for their damaged husbands.

Van Hove’s production of A View From the Bridge premiered in 2014 at the Young Vic Theatre and later transferred to London’s West End and then to Broadway, where it won 2016 Tony Awards for best director and best revival of a play.

The bare, bleak staging and lighting of the play, designed by Jan Versweyveld, Van Hove’s frequent collaborator, adds to the Greek tragedy nature of the play. (The staging also allows for on-stage seating.) Tom Gibbons’ sound design is an integral part of that mood. An D’Huys’ costuming involves street clothes and few changes. And then there is the lack of footwear. One can conjecture about the meaning of bare feet. Do they suggest the immigrant setting foot on new land? On the vulnerability of one while barefoot? On the readiness for a fight in a wrestling ring? I could make an argument for any one of those.

I have a slight quibble with the way the ending is staged. I won’t describe it, but I will say that I think the ending as Miller originally wrote it would be equally or more moving and in keeping with the Van Hove vision.

A View From the Bridge is surely one of the most powerful plays of any theater season. You can see it through October 15 at the Goodman Theatre, 170 N. Dearborn St. Performances are Wednesday-Sunday. Buy tickets for $25-$95. Accessible performances are available in October.