Abandoned Chicagoland: Rust on the Prairies

By Jerry Olejniczak and Arcadia Publishing 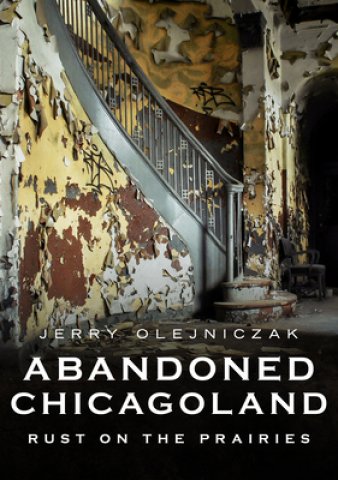 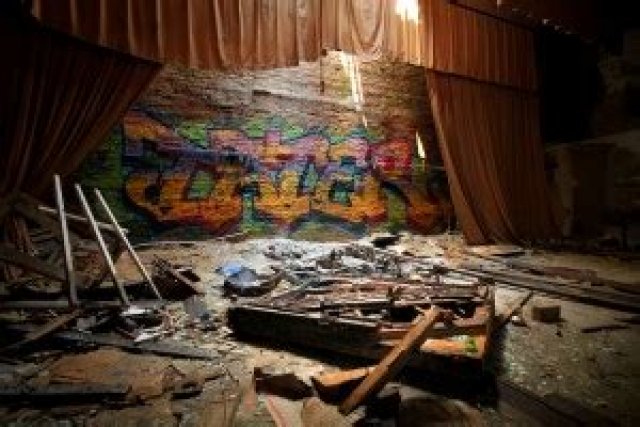 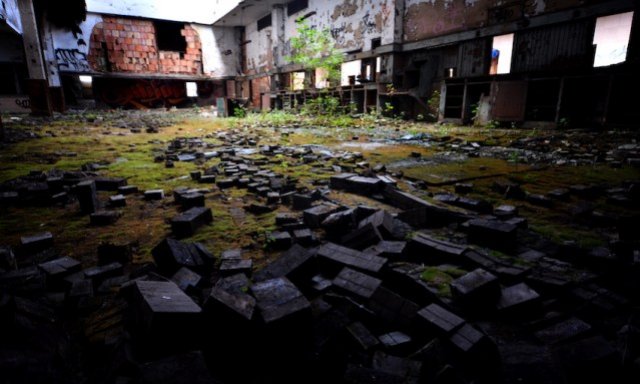 I’ve always been drawn to—and repelled by—demolition sites. Crumbling walls, shattered by a  wrecking ball and revealing shards of past lives and lost work. And if it’s a building that I knew and loved, there may be tears too.

This new book by Jerry Olejniczak is filled with images of sites demolished, transformed by decay, and sometimes overtaken by nature. Olejniczak (pronounced Oh-lay-KNEE-chalk) is an urbex photographer—a photographer as urban explorer. The job can entail legal jeopardy (when a photographer trespasses) and personal risk (photographer and activist Richard Nickel died in 1972 while taking photos in a partially demolished Chicago Stock Exchange).

Churches, theaters, post offices, hospitals, factories, schools. Olejniczak takes us along on his urban, suburban and rural jaunts, mostly through Chicagoland but also to other Rust Belt cities. His introduction is a short history of Chicago as the economic engine of the Midwest and includes, of course, an excerpt from Carl Sandburg’s poem, “Chicago.” He reminds us that “Today’s glittering skyline and sterile yuppie neighborhoods” belie the fact that Chicago was the appropriate setting of Upton Sinclair’s documentary stockyards novel, The Jungle; Lorraine Hansberry’s play, A Raisin in the Sun; and Richard Wright’s tragic novel, Native Son. Each of those works describes communities where poor Blacks or European immigrants lived and worked.

In his introduction, the author talks of other Rust Belt central cities that turned into ruins. Something similar happened in Chicago, he says, except that “the slide into urban decay happened on the peripheries, in outlying areas and suburbs, where it could be more easily overlooked.” The south side, southern suburbs, and the south lakefront down to Gary, Indiana, declined far from the downtown center and the decline affected people who were not politically empowered and thus easily ignored.

“Chicagoans may think of their city as a patchwork quilt of ethnic neighborhoods,” Olejniczak says, “or a burgeoning business and shopping center, but it remains, fundamentally, a blue-collar Rust Belt town made good.”

Each of Olejniczak’s nine chapters includes his commentary about the nature of the spaces, their surroundings and how he accessed them. He’s a photographer who knows that even stunning photographs may need to be embellished by a few hundred words.

His photos range from desolate interiors, marked by objects left behind, to ruined exteriors or broader landscape views of structures in the context of their territory or “the built environment slowly being reclaimed by nature.” One series shows Monet-esque views of deserted Gary, Ind., tennis courts at different times and seasons.

Corridors, doorways and stairs get their moment in his spotlight as “particularly potent subconscious symbols of transition and ascension. In an urban exploration context, they symbolize all the risks taken on the journey.”

Places to be explored are not always grand or ceremonial, however. Olejniczak explores spaces he calls tableaux vivants or living pictures. The term refers to an early form of entertainment where scenes were carefully lighted and staged with props and sometimes people; they were meant to represent works of art or biblical stories. To the urbex photographer, ruins with riots of color, furnishings, and detritus left behind are modern-day tableaux vivants. Former schools are sometimes examples, littered with desks, books and debris, and so are factories and workshops, deserted department stores, private homes and churches.

“Oh the Places You’ll Go” is another chapter in Olejniczak’s wandering. Usually off-limits, these spaces allow you to think you are the last person on earth to see them. They might be prosaic like a deserted office back room, or kitschy like the bathroom of a house where no one has lived for decades. The attic of a high school turned out to be a gallery of student signatures and graduation years scrawled for decades on timber walls and ceiling. A massive poultry feed mill next to railroad tracks in south suburban Riverdale had been deserted since the 1970s. Now, “it was a thirteen-story behemoth of rebar and rust.” Floors were shot through with holes and filled with the remains of conveyors, conduits and machinery. And photographers who braved a trip to the roof, he says, found breathtaking views of … well, nothing really. You could see the skyline of Chicago 20 miles away but not much else. “However, rooftops are their own reward.”

Olejniczak’s narratives and his photo captions are as intriguing as his photos.

My one critique of the book is its format. It’s vertical and 6 inches wide by 9.5 inches tall, which doesn’t allow the photos to be seen at their best. Photos that would be greatly enhanced by a larger format are shown on a half page at 5.5 x 4 inches. Certainly a larger format would be preferable (the classic coffee table book), but this size could be used better. I would rather see the book laid out horizontally with the spine on the short side. That would allow at least some of the photos to be shown full page. With its 145 photos, this would mean more pages than the current 96 and thus a higher price. But the result would be a superior book.

Urbex in Other Art Forms

Urbex imagery can be found in other art forms too. Several documentaries, for instance, detail the visual plight of Detroit, but few as dramatically as the 2012 documentary Detropia, directed by Heidi Ewing and Rachel Grady (streaming on AppleTV for $3.99). Detropia portrays the decline of a great American city through the eyes of its citizens, politicians, and the business community; its people struggle to deal with a city with a broken economic system. Pioneer urbex photographer Camilo Jose Vergara once called for central Detroit to be set aside as a ruins park, which he called an “American acropolis.”

Jim Jarmusch’s 2013 romantic vampire film, Only Lovers Left Alive, is set in a decayed mansion in the midst of Detroit’s ruined landscape. Adam and Eve, the centuries-long vampire lovers played by Tilda Swinton and Tom Hiddleston, occasionally travel through the crumbling Brush Park neighborhood, past deserted auto plants and abandoned theaters, in Adam’s vintage Jaguar XJS. Adam is a moody rock star; the first five minutes of the film are a glorious homage to vintage guitars. (The film is available on Prime Video.)

This month in Chicago, the Wrightwood 659 gallery is opening a new exhibit titled Romanticism to Ruin: Two Lost Works of Sullivan and Wright. The exhibit will use 3D models, salvaged ornament and artifacts, and archival photographs to document the design, construction and destruction of Sullivan’s Garrick Theatre on West Randolph Street (demolished in 1960) and Wright’s Larkin Administration Building in Buffalo, NY, (demolished in 1950).

Abandoned Chicagoland: Rust on the Prairies by Jerry Olejniczak is part of Arcadia Publishing’s “America Through Time” series; it’s available from booksellers and on the publisher’s website. Arcadia publishes other historical and regional books, including the familiar “Images of America” series.

All images courtesy of the publisher. Article from Third Coast Review.