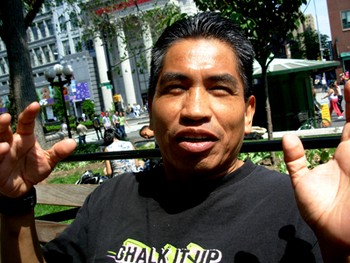 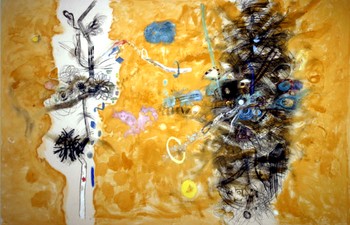 "The Conversation" mixed media on canvas, 2004. 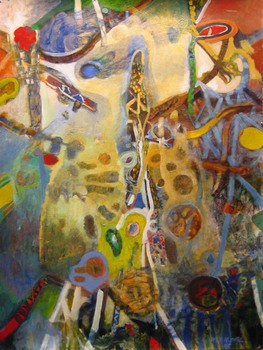 Following a long and winding road, four years ago, the abstract painter, Mario Martinez, relocated from San Francisco to New York City. He earned an MFA from the San Francisco Art Institute, in 1985, and continued to work there as an emerging artist. It was a difficult decision; including leaving a life partner behind, but it was an important career move. That is beginning to pay off although he is still looking for appropriate gallery representation. He has been associated with galleries but never “the right one.” Part of that is his inability to fit into a convenient marketing niche. He is a Native artist, and while that culture and tradition is deeply rooted in the work, for most viewers, this is not readily evident. But to make the traditional sources for the work more readable and graphic would betray deeply rooted tribal rituals and symbolism.

So there is a conundrum of dealing with Martinez. While he is, by birth and heritage, a Native artist in just what manner does he create identifiably native art? In 1953, he was born in a Yaqui village of some 350 individuals, Penjamo, near Scottsdale, Arizona. After just a year and a half in New York he was selected to participate in “New Tribe New York” which launched a commitment regularly to show living artists as a part of the programming of the Smithsonian National Museum of the American Indian in lower Manhattan. The project included four shows for Martinez, as well as, Alan Michelson, the performance group Spiderwoman Theatre, and Lorenzo Clayton.

For an artist relatively recently arrived in the city it was a great honor and opportunity to be offered a museum level, solo exhibition. It earned him a lot of career respect and support. He recalls with pride how many artists told him that the show knocked their socks off. The museum acquired a major piece from the exhibition for the permanent collection. Other than that, however, not a lot happened. He recalls going into the show with limited expectations which proved to be an accurate strategy. The contemporary shows at NMAI, which were launched in January, 2005, have attracted sparse critical and curatorial attention although the programming has been outstanding on every level.

So, in terms of a long term goal of becoming an established, New York artist, Martinez is still pounding the pavement. Literally, as I found out recently hanging out with him for a couple of days in the city. In all aspects, Mario is in perpetual motion. I found myself struggling to keep pace with a non stop conversation as we walked an average of ten to twenty city blocks to get to a subway connection, a couple of receptions, the studio, Chinatown for dinner, and back to my hotel where I collapsed in complete exhaustion while, for Mario, the night was still young.

But what fun. When I mentioned that to him, with a great warm laugh, he commented “Now you know why Indians hang out with Indians.” Mostly he tells spellbinding stories. But then will stop with comments like “Don’t repeat that” “Don’t write that down” or “I’ve already told you too much.”

So it is difficult to sort through just what is on and off the record. How to tell the story in a rich and compelling manner and yet not betray trust and privacy. This is a not uncommon phenomenon when interacting with native people. There is a lot of back talk about other tribes and how certain artists are more willing to reveal and exploit in their work what is considered sacred and private.

There is often conveyed the notion that “we are the good people” and they (other tribes) were enemies or are not as traditional as “we are.” I learned that the Yaqui were a great nation that ranged from Mexico through the South West and Arizona. They are a hard working and self sufficient people who have fought and struggled for independence and recognition from three governments: Spain, Mexico and the United States. As recently as 1978 the Pascua Yaqui Tribe of Arizona became federally recognized. Because of struggle with Mexico over their land and rights there was a Diaspora and migration to Arizona that included his grandparents. Early on they were converted to Christianity by the Spanish Jesuits. But, as is common in such conversions, much of the older religion and culture is embedded in the practice of Christianity. He described, for example, returning annually to his people during the Holy Week that ends on Easter Sunday and participating in round the clock dancing and rituals. This has resulted for him in cathartic moments and mystical insights but he cut short before elaborating.

To emphasize the sacred and private nature of the rituals he described how at the end of the ceremonies many of the objects and elements involved are burned and some are hidden and buried for the following year. He deplored the fact that such items become artifacts, among other tribes, and show up as goods to be sold to tourists and collectors.

There is the complex story of just how he became educated and is now a professional artist in New York. He was just one of three of his age in the village to graduate from high school. There were mentors who expressed an interest in him and literally took him by the hand to enroll him, first in junior college, and eventually the University of Arizona from which he holds a BFA. There were very few individuals with formal education in his community so it was just not a priority. There were no role models. In fact he fought with his father and left home at 18. But while he got no direct support, financial and otherwise, he feels that he got a lot in other ways.

So just how do we view the rich, complex, beautiful, and sophisticated “abstract” work that he produces? As we sat on a park bench in Union Square I asked how, as a native person who grew up in the dessert of the Southwest, he could possibly live in New York? Looking around expansively at the trees and people he commented that “We are surrounded by nature in New York. Look at the trees and the people. People are nature. They live and breathe, eat and make waste.” Well, I suppose so.

We left this “oasis of nature” and made our way to his small studio which he shares with a photographer in Brooklyn. There was just one work on view, a large, unstretched canvas “Conversation” which was included in the NMAI show. We settled down to talk about the work and that piece in particular. Before and since then I have looked at a lot of his images on line. We have made plans to get together in the fall and look at new work.

Just what is the native element, the Yacquiness, in the work I asked? “It takes a village to raise a person. Nobody does it alone,” he said. “It comes from family and the group. People impact you. The help may not be money (the village is poor) but there are many contributions to your life. You don’t create alone. It is a tribal culture and a community culture of which you are a part. It is a myth that you make it on your own. In my work there is figurative abstraction but that abstraction is based on nature. You are made up of a lot of different sources. Your vision is a combination of all the cultural language and the educational systems that mold you. What I do is low tech. It is about the hand, the eye, and the body. It is basic. The basicness of nature.”

Although abstracted there are recognizable elements in the work such as flowers and cactus. Or, as Pollock replied, when Hoffmann suggested that he look at nature “I am nature.” That may apply as well to Martinez. From an early age he loved to draw and paint in school but there was no direct tradition of “painting” in native art which is more rooted in craft and ritual objects. The craft may reach the level where it is viewed as art, such as the vintage items on view at NMAI, but that was never their intention. There might be images in tribal traditions but it was never independent of ritual and religion. The idea of the contemporary native artist is relatively recent with now deceased individuals such as Fritz Scholder and R.C. Gorman. Martinez was interested in but not influenced by their work which he views as literal and illustrative.

Referring to “Conversation” he said “When I grew up this painting and others like it might not be seen as based in Yacquiness but I always feel that it is. We didn’t have painters in our culture so I am borrowing a European tradition of painting. I am borrowing from art history and modernism. As a kid growing up in these times of Western culture, with its technology and ways of living, that made me into the kind of artist I am. As a kid art was about drawing and painting and I am still doing it. So I am still a kid and still love it.”

A lot of the complexity and sophistication of the work is the result of that challenging and hard fought struggle for education. He describes having inspiring professors particularly in San Francisco where he thrived in the master’s program. In New York he is a passionate visitor of galleries and museums and rattled off a number of recent exhibitions from Goya at the Frick to David Smith at the Guggenheim which he had found inspirational. His sources are far more likely to include Kandinsky, Pollock, Guston and Rothko than the native artists of Santa Fe. But he is quick to note that there are Yaqui sources for the work although “abstracted.”

“In this painting (Conversation),” he said. “I saw two entities having a conversation. On the right is the universe and on the left a tree having a conversation with the universe.” He stopped to exclaim that he hated being so literal in discussing or explaining the work. “The tree is asking the universe ‘What do I tell the Yaquis about how they will change?’ There is among my people the legend of the talking tree, the humming tree. About a tree that is making sounds. In one version an old woman’s daughter is the interpreter who explains that from this time forth there will be ‘new wars and new religions and new technologies and things we have not had.’ There are Yaquis who understand that. It is our recreation story which is 400 years old and dates from when we met the Jesuits. This painting didn’t start as that. The art has a life of its own and you are the medium. The story is in you and it comes out. There is no plan or concept. You just start. The world is changing and what do I tell them? So, The Conversation.”

If the Yaquiness is so embedded in the work why not make that content more explicit and visible to the viewer? Would that not create greater access and interest? Perhaps, but at what cost? Or, as Mario said “It takes a village.”