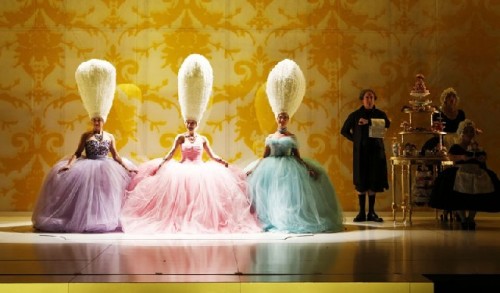 At Versailles in Full Wigs 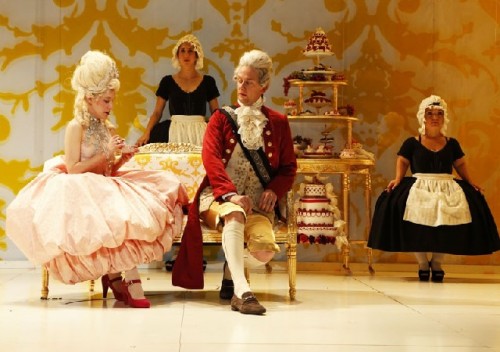 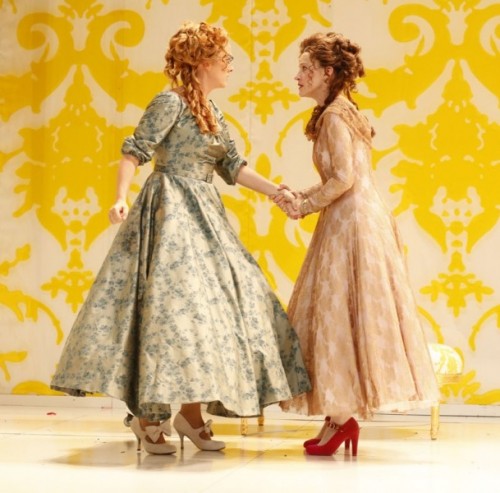 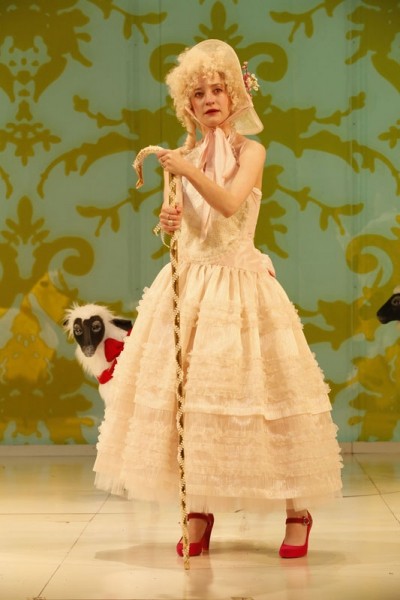 Marie (Bloom) as a Shepherdess 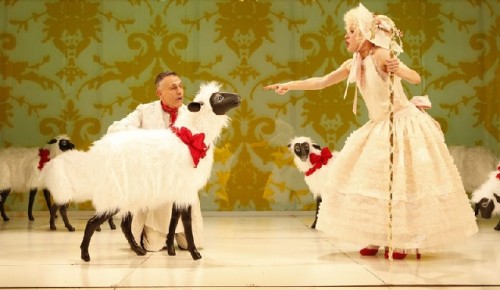 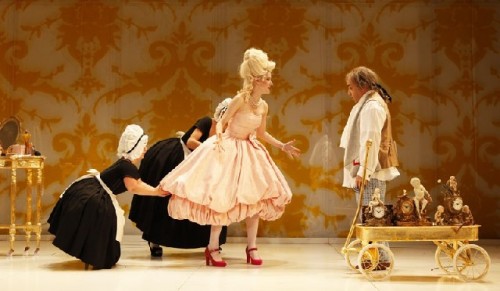 Marie (Bloom) and Louis (Rattazzi) with his clock collection/obsession 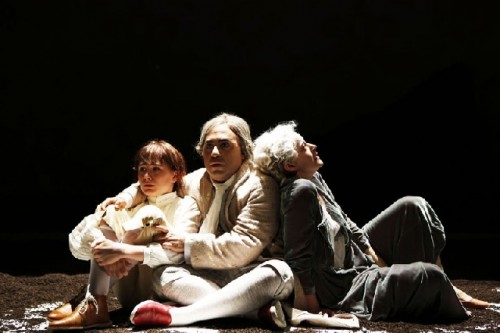 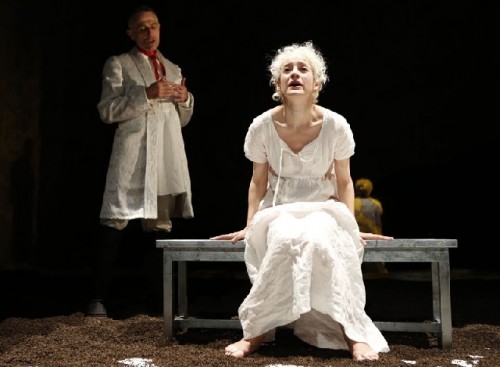 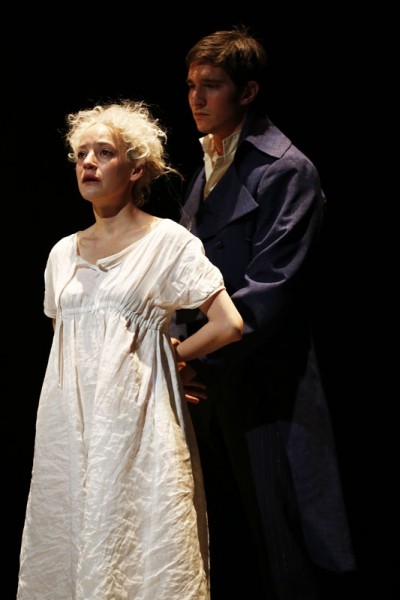 Brooke Bloom as Marie and Jake Silbermann as her former lover Axel Fersen preparing for the Guillotine.

American Repertory Theatre
Loeb Drama Center
64 Brattle Street, Cambridge, MA 02138
Sept.1 through Sept.29
Marie Antoinette is one of history's least admirable individuals. Yet A.R.T.'s David Adjimi production uses contemporary theatrical tools to actually humanize her seemingly historically monsterous qualities. She began as Louis XVI's self-entitled, Austrian-born, 14-year-old child bride.
Marie Antoinette premiering at the A.R.T. is a constantly moving stir-fry of comedy and empathy, techno-rock and classicism, reality and surrealism. Brooke Bloom as the main character gives a stunningly nuanced performance. The show is contemporary theatre at its existential best.
With her large topiary hair decomposing in direct proportion to the darkening direction of the narrative, this is Marie's journey from utter opulence to the unfettered guillotine. Scenically, like the words in the play, the sets by Riccardo Hernandez are minimalist yet cleverly visually describe richness spiraling downward toward degradation.
Through discourse and monologue, Brooke Bloom expresses social satire, political ignorance, self-realization and selfishness. She is at once hypersophisticated while being admittedly nearly illiterate; living in a bubble while justifying her life due to her station in life. She is the queen of France, but through her breeding, she is totally disconnected from her subjects. She is confused as to why she has so fallen. What did she do?
Louis XVI, humorously yet eloquently played by Steven Rattazzi, is terribly disconnected as well. His passion is for clocks and how they go together. Time is a metaphor for the short period left in his reign and the French royalty itself during the Revolution. When challenged by Marie, Louis needs time to figure things out.
The grand style extravagance at the beginning of the show soon becomes a shrouded mood of despondency, a despondency that evolves into prison, loss of family and then inevitable execution. Several layered symbols are used by the playwright. Not only, as previously mentioned, Louis' clockworks, but Marie's wigs, the indulgence of sweets and a herd of sheep and a talking sheep are themes throughout the drama.
Marie's wigs begin large and dimish as she declines in power and understanding. Oddly, the loss of hair is a bit like Samson's locks being shorn. She loses her strength and is physically diminished. She goes from haughty grand diva to sympathetic and sad victim. She is a victim of her background, her lack of education, and an inculcation of the Divine Right of Kings (and Queens). Democracy? The people are not capable of democracy to her thinking. In the end, she is ultimately a victim of the system.
Sweets are offered and served by servants throughout the first part of the play. The sweets underscore her mythological comment when supposedly asked about the masses not having enough bread to eat, "Let them eat cake." Sweets also relates to the quality and opulence of the palace life. Sweets are offered to her guests as if to sugar-coat the seriousness of what is to befall the French monarchy.
The sheep metaphor is multilayered. First, it relates to Rouseau's philosophy of naturalism. Secondly, it relates to the mindlessness of the masses following the dictates of a corrupt regime. And third, it refers to Marie and Louis's own dilemma having to follow the rules of the dictatorial monarchy. In addition, the talking sheep (played interestingly by David Greenspan) is actually a mirror image of Marie, a questioning conscience that often confuses her about what is happening and its meaning.
Either purposeful or accidental, there is easily a recognizable resonance between Occupy Wall Street and the Arab Spring here. Corrupt, controling economic dictatorships causing revolution by the masses is reflected in this most personal perspective of the French Revolution.
Director Rebecca Taichman creatively uses movement, lighting and costume changes to shift emphasis and move along the storyline. The choreography by Karole Armitage uses dance skillfully to punctuate dramatic points. Overall, the staging allows the play's narrative to twist and turn through satirical interplay, counterpoint surrealism, and serious dark mood swings. The denoument is known by the audience in advance, but the journey to reach its soulful sad ending is a theatrical surprise.
Not enough can be said about the stunning performance of the true star of Marie Antoinette--Brooke Bloom. Her range is impressive. Her role requires her to be transformed from a sassy Lady Gaga/Madonna-like diva to a sad sympathetic Edith Piaf-like victim. It is rendered in a layered and sophisticated way. In the beginning of the play, she is certainly a bit silly and superficial, naive but never mean-spirited, confused and even ignorant. But somehow she becomes dignified at the end. Brooke Bloom performs a tour de force as Marie. She is a real star.
Reminiscent of Samuel Becket or even Jean Genet's works, there is a certain minimalist abstraction to Playwright Adjimi's wordsmithing. This makes the narrative at times poetic but also open to personal interpretation.
The American Repertory Theatre has a decades old reputation for presenting often cutting edge theatrical events. Adjimi's Marie Antoinette certainly falls into this category. This is a production that transcends its story and provocatively makes us look at the dramatic history that it portrays in new and interesting ways. It is a play to savor, a show that is penetratingly entertaining and edifying.
Back to Theatre Section Home