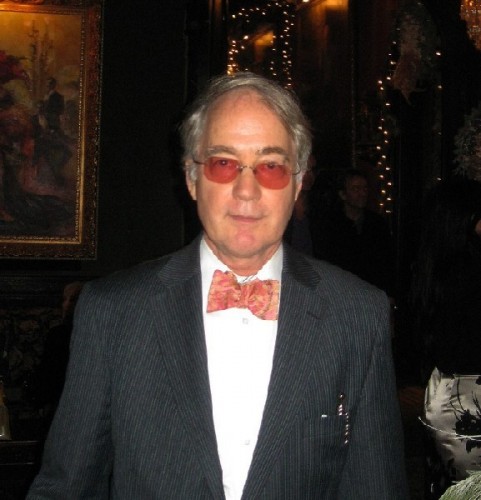 O Aldon James, the ousted president of the National Arts Club, is noted for looking at the world through rose colored glasses. 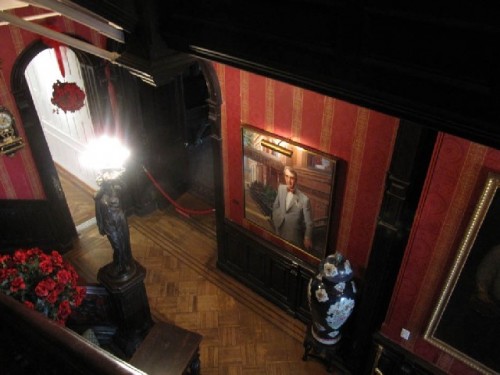 A portrait of James, now removed, once held pride of place at the top of the grand staircase.

The venerable National Arts Club, with its vintage interior evoking New York at the end of the 19th century, including elements of Tiffany stained glass, has been used for movies and fashion shoots.

The colorful club has its own remarkable story to tell. If only the walls could speak. The scandal marked, long term regime of ousted club president, O. Aldon James, his twin brother and cronies, hunkered down in prime real estate at bargain rentals, plays like a series destined for Masterpiece Theatre.

When a long overdue change of the board led to the ouster of The James Gang they did not go softly into that good night. There were suits and counter suits.

As the new club management struggled to regain a warren of rooms and spaces appropriated by James and his associates there was an extreme makeover. Images of the junk and debris littered spaces were posted on the internet. Some of those reclaimed rooms have been refurbished as transient rooms for visitors. The club has been cleaned and scrubbed from top to bottom.

Some of the redecorating, like restoring the Sistine Chapel Ceiling, has been deemed overzealous for a national landmark. The reupholstering of the dining room, and new animal patterened carpeting adjacent to it, is more Palm Beach than Old New York.

While a regime change and makeover were inevitable a new look for an old setting can be disruptive.

An 18-month investigation by the Office of the Attorney General (OAG) into misappropriation of charitable assets and breaches of fiduciary duty by O. Aldon James, the former President of The National Arts Club has ended.

Concurrently, the OAG has filed a civil lawsuit against O. Aldon James seeking over $2 million in restitution, on behalf of The National Arts Club, which continues to cooperate fully with the OAG in their efforts to recover some portion of misappropriated resources.

The OAG has issued a Letter of Agreement to The National Arts Club expressing that "in consideration of the undertaking herein by the NAC, no action will be brought by the Attorney General..." ending an investigation of the waste and misappropriation of charitable assets and breaches of fiduciary duty by O. Aldon James, the former President of The National Arts Club.

The Letter acknowledges major reform initiatives put in place by the Club's Board of Governors, under the leadership of Dianne Bernhard, who assumed James' role on an interim basis in March of 2011 and became the Club's President in May of 2011. The reforms noted include a changing of the Board's composition, with the Club continuing its internal policy requiring that Governors not stand for re-election at the expiration of their terms if they served on the Board at the time James stepped down as President, full internal investigations of the Club's financial, operational and real estate policies and procedures, its engagement of a professional General Manager, an internal controller and an operations leader to oversee the Club's day-to-day financial and operational functions, its termination of the accounting and auditing firms that served during James' tenure, its establishment of new Audit and Governance oversight Committees, appointment of a new Conflicts Officer, the complete review by the Club's outside counsel and auditors of all legal and accounting policies, implementation of internal controls that protect the Club against misappropriation and misuse of assets, and new procedures for leasing of residential apartments within the Club.

Speaking for the Board of Governors, Mrs. Bernhard expressed her appreciation for the thorough investigation and commitment demonstrated by the Attorney General's office, adding "it's now time for all of us to get our focus back on art, our mission and sharing our rich resources with the world."