The Bandana Splits at Mass MoCA 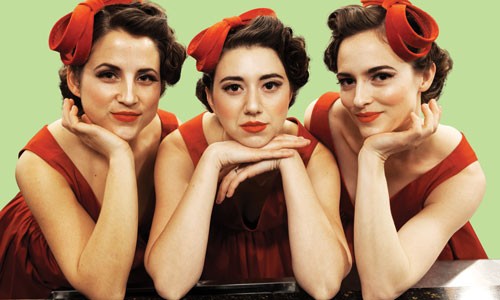 Balthrop and Nero met Landes in 2008 when they invited her to perform in their band's holiday show and they discovered a shared love of retro-pop music. This sound, inspired by great girl groups of the past, is a recent trend in pop music -- artists such as Adele, Janelle Monáe, and the late Amy Winehouse celebrate this type of music too. The spirit of bands such as The Ronettes and The Caravelles infuses the soul of the Bandana Splits.

Sam Cohen, of the band Apollo Sunshine, produced the Bandana Splits' 2011 debut album, Mr. Sam Presents the Bandana Splits, composed of 12 original songs and 2 covers. To recreate the retro sounds they loved, the women performed each track around a single microphone while "Mr. Sam" played all the instruments. The band's bubbly sound includes "pop smarts and cotton-candy harmonies that sound just as fresh as they would have in 1961," cites Cover Me blog. BBC Music says the charming single Sometimes "takes bits of almost every musical era and makes something new." Today, the Bandana Splits perform around the country, and their songs Sometimes and Hold On have been featured on the hit HBO show Bored to Death.

The Bandana Splits will kick off the fall season "Up in the Club." MASS MoCA's Club B-10 on the third floor is an intimate, casual spot which features hip, emerging artists. Dinner and snacks from Lickety Split Café and drinks from the MASS MoCA bar are available before and during the performance.

The Bandana Splits take the stage on Saturday, October 6, at 8 PM. Tickets are $12 in advance or $16 on the day of the show. Tickets for students are $10. MASS MoCA members receive a 10% discount. Tickets are available through the MASS MoCA Box Office, located off Marshall Street in North Adams, from 11 AM until 5 PM (closed Tuesdays). Tickets can also be charged by phone by calling 413.662.2111 during Box Office hours or purchased online at www.massmoca.org.