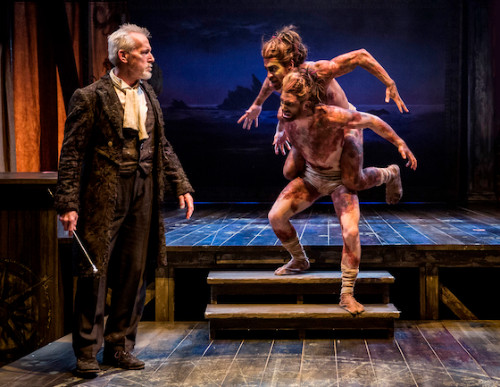 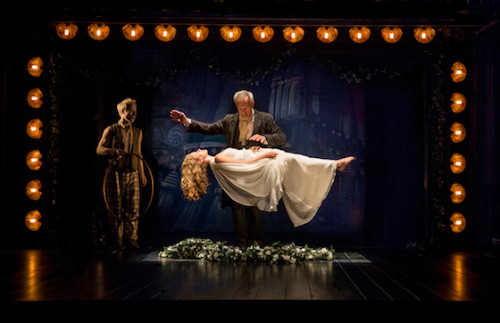 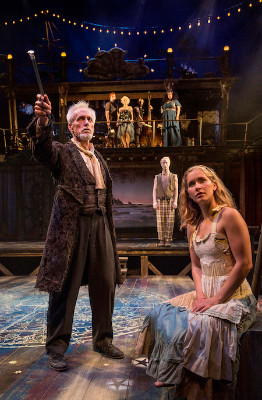 Chicago Shakespeare's bewitching new production of William Shakespeare's The Tempest was adapted and directed by Aaron Posner and Teller (the silent member of the Penn & Teller duo). The play has all of its poetry and more music and magic than traditional productions of this late Shakespearean tale of revenge.

Prospero's island has been transformed into a travelling tent show laden with trickery and magic. The spirit Ariel (Nate Dendy) seems to appear out of nowhere again and again and is capable of amazing sleight of hand. Prospero, played with wicked charm by Larry Yando in his 24th CST production, is the wizard and rightful Duke of Milan.

This version of The Tempest is marked by the live band Rough Magic on a loft stage and bluesy music composed by the great Tom Waits and Kathleen Brennan. The song that sounded particularly Waits-like was "Clap Hands," which opens act two, with the band performing behind a scrim.

The Tempest tells the story of Prospero and his daughter Miranda (Eva Louise Balistrieri) who were cast out to sea after Prospero was overthrown from his dukedom. It happened that Gonzala (played by Barbara Robertson), Prospero's trusted counselor, provided them with provisions and Prospero's books of magic, so they did not die at sea. (Gonzala is usually Gonzalo so this is an au courant interpretation.) Prospero and Miranda reached safety on a lonely enchanted island and here they have lived for 12 years. Prospero rules over his slave Caliban (see below) and Ariel.

Now Prospero decides it's time for revenge and conjures up a terrible storm at sea to catch the men who were responsible for his fate 12 years ago: King Alonso of Naples (John Lister) and Prospero's brother Antonio (Lawrence Grimm), who usurped his title. Also on board are Sebastian (Michael Aaron Lindner), Alonso's evil brother, and Ferdinand (Luigi Sottile), son of Antonio. Ferdinand manages to reach the island first, meets Miranda and of course, they fall in love.

By play's end, Prospero, with the skilful help of Ariel, settles the score but finds a reserve of forgiveness to sweeten his revenge.

Yando and Dendy are outstanding as the two leading magicians and they're supported by powerful performances by the whole cast. The most inventive casting of The Tempest is the performance by two actors (Zach Eisenstat and Manelich Minniefee) who, perpetually entwined, portray Caliban as the creature Shakespeare described as "the thing most brutish" and "not honored with human shape."

The production is notable for its use of magic, both Ariel's sleight of hand and visual illusions throughout the show. Johnny Thompson gets credit as magic designer and Thom Rubino for magic engineering. And of course, Teller for magical strategy. In one scene, Prospero levitates the sleeping Miranda and he and Ariel demonstrate that no wires or devices are holding her body in the air. In another, Prospero imprisons Ariel in a cabinet in which the sprite's head seems to turn 360 degrees around on his body while his feet remain in the same position.

Posner, an award-winning playwright known for his scripts for My Name Is Asher Lev. The Chosen and Stupid Fucking Bird, graduated from Northwestern University. In addition to Teller's long career performing with Penn Jillette, his writing has been published in The Atlantic, the New Yorker, Esquire and Smithsonian and in several books. He co-wrote and directed Play Dead (off-Broadway) and directed the 2013 feature film, Tim's Vermeer.

The Tempest continues at Chicago Shakespeare on Navy Pier through Nov. 8 with performances at varying times Tuesday through Sunday. Tickets are $48-88 with $20 tickets available for buyers under 35. Buy them online or by calling 312-595-5600.