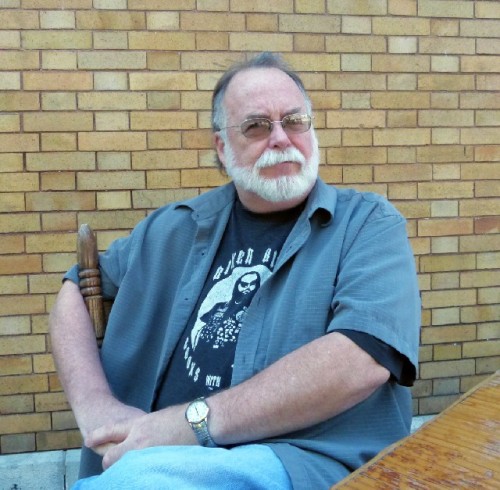 Mark St. Germain has been a board member of Barrington Stage Company since it was founded eighteen years ago. Giuliano photo.

Charles Giuliano Last year Barrington Stage premiered your play Best of Enemies. Like Dr. Ruth it was presented in two runs both of which were well received by critics and audiences. Is there any update?

Mark St. Germain No. We have tried but it is very disappointing. In New York I think things are getting more and more star driven. That’s one of the things that held us back this time. We had some interest from a star and we waited. We thought there was a decent chance that he would commit. So we waited for months. Months went by which is not good. That took some of the air out of it. It’s being done at the Florida Studio Theatre in January. I’m going to be down there sort of in residence for a period of time. We’re still sending it around and trying to push it. I don’t know what will happen.

CG This is a part of the dialogue about having a life in the arts. We put such enormous effort into projects that get just increments of attention. Recently, I read about a playwright who had won an award of some $250,000. He has had plays performed on Broadway (M Butterfly, Chinglish). His comment was that now he has the money and time to write his next play. Even considering that he was a successful playwright the article talked about how, on average, he earned about $30,000 to $40,000 a year working full time at writing plays.

MSG I believe you are talking about David Hwang.

CG I was surprised by that.

CG How tough is it?

MSG Not yet. Because of Freud (Last Session), and combine the two, but that will only last for a period of time. Right now I am so fortunate that it is being done at so many places.

CG How many currently?

MSG I only find out after Dramatists Play Service sends me a notice. I know they’re doing it in Rio because we’re going to Rio. An LA production will open in January. With Judd Hirsch doing Freud and Tom Cavanaugh doing Lewis. We start rehearsal on that in New York in December. It’s things like that which help but at some point that has to end.

CG How about Chicago.

CG I thought it closed.

MSG No, it’s been extended. They’re up for a Jefferson Award which is in October I believe. They’ll go for a little while longer.

MSG Yes. Next summer it will be done in Guild Hall in the Hamptons. I know some of these things only because I’m involved with those productions. The other productions, which are just licensed through Dramatists Play Service, I don’t know about.

CG How is this helping to sustain your other projects?

MSG It’s what gives me the time. Right now there’s the Dr. Ruth play. There’s a new musical comedy with John Marcus who was the executive producer of the Cosby Show when I worked on it. It’s about a barber shop quartet in the Mid West. It’s The Fabulous Lipitones. One of them is a druggist who thought he could get a tie in with Lipitor. Which never worked out. That we have a reading of in two weeks in New York. That will be done in May in Atlanta. So it is kind of juggling that. Then there is Hemingway/ Fitzgerald that will be done this summer. A commission. There’s a couple I’m waiting to see on rights situations.

CG There is a phenomenon now where regional theatres are commissioning plays. Can you discuss that trend?

MSG It makes total sense for regional theatre. If you’re regional you want a national impact. In New York you already have a national impact. People know what’s going on in New York. They are making a gamble that this will have a sustained life. Because of that they get a percentage any time it’s done after. When Barrington did Putnam County Spelling Bee they benefited as well as the authors.

CG How about Freud?

MSG They get a percentage of Freud, sure. The Dr. Ruth play was a commission. When that has an extended life.

MSG We have producers coming to see it. Eventually, we will have some kind of a presentation in New York. Then we’ll cross out fingers.

CG Dr. Ruth seems like a natural for New York.

MSG I would think so. People are definitely aware of it. I think it could work very well. For a show it’s inexpensive. We have one person. Pretty much everything is in public domain or Dr. Ruth has agreed to certain things.

CG Can we discuss your relationship with Barrington Stage. You’re a board member and consigliere to Julianne.

MSG (Laughs) One of them.

CG How long does the relationship go back?

MSG What is the theatre now, eighteen years old? I was on the original board. Before that, for probably ten years, I have known Julie for so long. Before Barrington. We did a musical that’s how I met her. She did an adaptation of Just So by Kipling which turned out not well. It was wonderful because we got to know each other and were involved in different projects for years.

CG How would you access the health of Barrington Stage at this point?

MSG I think it’s incredibly healthy. We have a capital campaign to finish off paying for the theatre. Most theatres are in terrible shape. We now have two physical spaces to present shows in so we’re in very good health. Last year subscriptions were way up. In the Stage Two space people really seem attracted to the new plays. Some sell out. Some come close to selling out. They have goals every year and are doing very well.

CG When I spoke with Terry Teachout (Wall Street Journal Drama Critic) he said that there are some 260 regional theatre companies in America. Including two in Juno, Alaska which he would like to get to. When he addressed the ATCA (American Theatre Critics Associaton) meeting in Chicago he described how, when he started reviewing nationally for the Journal, he didn’t know anything about regional theatre. He now states that a lot of what is presented by regional theatres is every bit as good as what is produced in New York.

MSG I believe that’s true. Regional theatre takes chances which is less and less true in New York. To get something on Broadway you either have what some producers call, a grant, or you have a star and that’s how most of them function.

CG I posted the list of Broadway openings and why did I find it so unexciting?

MSG I didn’t read that last weekend. I just didn’t want to think about it. I get very upset. I really feel strongly that all we are going to do is to revive the revivals in years to come. That’s why it’s important to have regional theatre. Everyone is so safe. I understand. Producers want to invest and get their money back. It doesn’t happen with a lot of shows.

CG There is another side to that. I was looking at the season's schedule of five or six plays by a Boston company and I had seen most of them on Broadway. Why do I want to go to Boston to see another production of Clybourne Park? Do I need to see Bloody Bloody Andrew Jackson again considering that I hated it the first time?

MSG If I could wave a magic wand the NEA would not fund any  regional theatre unless they did x amount of new plays.

CG If you can’t get tickets to Book of Mormon on Broadway then see it at your local theatre.

MSG Why would anybody write for the theatre right now? It makes no economic sense. People need to live and make money.

CG Didn’t your parents sit you down and say Mark, think of what you’re doing?

MSG I don’t think my parents thought that I was a writer until they could see my name on a TV screen (The Cosby Show). It’s nice that he does these plays but when is he going to get serious? When I started writing the plays I stopped writing for TV and film because I became unemployable.

CG How does the difficulty of sustaining a life in the arts sit on you as the head of a family? What is the human aspect and state of mind?

MSG The children are grown up. I was writing for film and TV while they were growing up. That took care of their education and our living expenses.

CG Would you ever go back to that kind of writing?

MSG I was always juggling it with writing for the theatre. I would never do it exclusively. But sure I really enjoy doing screenplays. It really breaks my heart that there are a couple which studios own and I will never get back. They tack interest every year to the price of an unbought screen play. Let’s say they bought it for $300,000 and they don’t make it. Some time later someone says I would really like to make this movie. If they ask the studio how much it costs it’s not $300,000 any more. Now it’s $500,000. They’ll say, we had studio costs, and this and that. So these things are effectively gone forever. The time and heart you put into them, well, you’ll never see them again. You’ll never see them made. So that’s disturbing.

CG What about TV?

MSG I would be too old. They wouldn’t hire me. Most of the people I know who did TV are retired at this point. Some are very young but they make so much money from it that they will just walk away.

CG You left the Cosby Show.

MSG I was so passionate about doing plays that I wouldn’t let anything interfere with it. I had a fear. I saw people go to LA and become multi millionaires but never do theatre again. Should I have hung in longer and done more of it? Yes. I was never full time staff and never wanted to be. Financially it was a mistake.

In writing plays the biggest investment is the research. Once I am able to sit down and focus I can write a first draft in two or three weeks. The first draft of the Hemingway/ Fizgerald play is due in January.

CG Can we get as sense of you oeuvre?

MSG I probably have a dozen plays. About six musicals.

CG Over what time frame?

MSG About 27 years. I did a documentary. A children’s book. At least ten screenplays. A couple of TV shows.

CG Did any films get produced?

MSG A Caroll Ballard film called Duma (2005). It’s based on a true story about a kid who has a leopard. It’s set in South Africa. He has a leopard as a pet. It was all changed in the movie.

CG You have described to me having piles of books for separate research projects for potential plays. Right now how many piles are there?

MSG There’s a lot. I probably have a list of twelve things I would like to do. Recently I wanted to do a musical about Yip Harburg. He wrote the Wizard of Oz. He did Brother Can You Spare a Dime. Endless wonderful songs. That just didn’t work out. Rights wise. There’s one I really want to do and haven’t found the way into it yet. It’s still on the list.

CG For now let’s enjoy another run of Dr. Ruth.