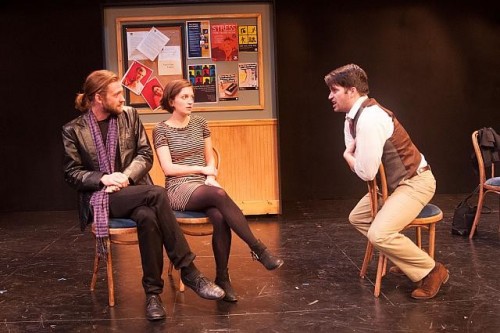 Matthew confronts Adrian and Lisa or does he? Kevin Sprague photos. 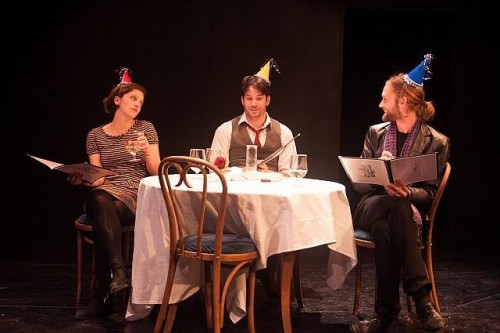 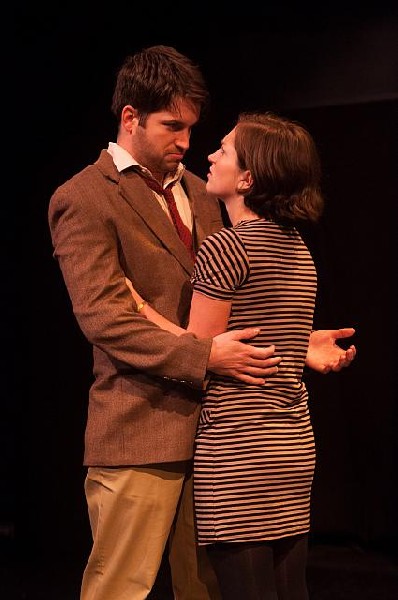 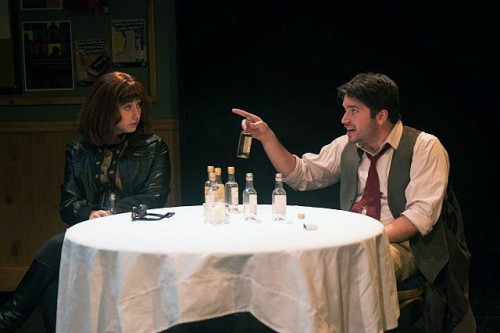 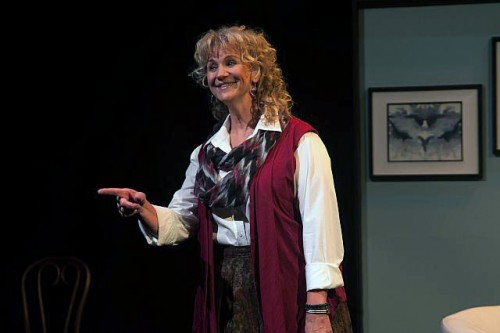 The shrink is Frank. 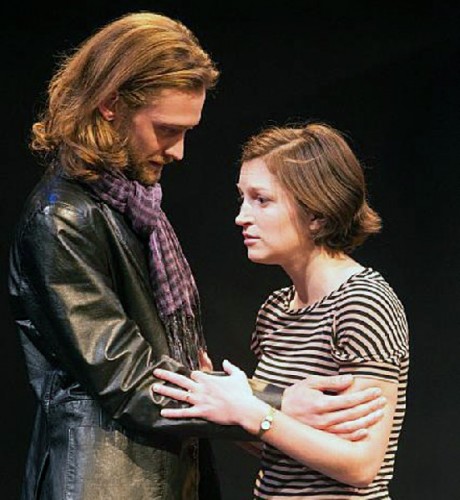 Lisa is having a fling with her director Adrian.

In the serpentine plot of Private Eyes at Shakespeare & Company there are so many reversals, twists and turns that by the end of the evening one suffers emotional whiplash.

This play by Steven Dietz requires a chiropractor rather than a critic to get sorted out.

There is the device of a play within a play, but more complex, like one of those nested Russian dolls. The drama/ comedy begins with an audition taken a few times. But is it an audition or a play with an opening scene about an audition? After tottering along for awhile the “real” director Adrian (Marcus Kearns) emerges to take over working with the married couple Lisa (Caroline Calkins) and Matthew (Luke Reed).

This is theatre about theatre with a number of convolutions from fantasy to reality and back again.

On opening night there were many actors and theatre people in the audience. They howled at the in jokes about actors asking for the motivation of their scenes.

The actors ask the director are you looking for something in this scene? The answer, with no direction, is yes. Huh!

Adrian informs us repeatedly that it is his (British) way of working. Which is to say not directing as directing. Then seeing where that goes.

How avant-garde or something.

Cast adrift and struggling to keep up with the ever changing plot lines felt like that classic Abbott and Costello routine of “Who’s on first?” But, frankly, not as funny.

You would need a shrink to get through all the multiple identities in this play. Actually, one is provided in the character Frank (Lori Evans) the deadpan, shall we say, stiff shrink who is treating the delusional Matthew. The gender bender name is a play on the line when first meeting her client “I’m Frank and I hope you’ll be.”

During the shoulder season the company likes to lighten up with comedy. Usually this means a farce but this time a production that hovers in the no man’s land between comedy and drama.

Many will find this amusing judging by the responses of an opening night audience.

There were indeed hearty laughs but delivered through wildly uneven performances.

As Lisa the actress Caroline Calkins was really, really terrific. She is about 90% of why you should see this production. A really superb young actress she made the absurdist plot twists close to credible. With the added observation that she needs more training on projecting her voice even in this small theater.

Her husband, played by Luke Reed, was credible and compelling as the odd man out who is mostly clueless that Lisa is having an affair with Adrian. There is some wonderful physical comedy by Reed who is required to make abrupt mood shifts including an over the top hilarious dance/ disco bit at the end of act one.

Again, as a theatrical cliché and in joke, Adrian and Lisa are having an intense six week affair which is the book end of their rehearsal time. At the end of which the British born director will move on to his next production and opportunity to seduce and abandon another leading lady.

That’s all a bit sordid but appears to be quite common in theatre.

Early on when we meet Adrian making moves on Lisa he is described by her as a “prick.” The problem is, however, in a polished, mannered but apathetic performance by Kearns, well, he really isn’t. A prick that is.

What we hoped for is more like the persona of the smarmy, handsome devil, nasty, self absorbed British born director Derek Wills (Jack Davenport) we so loved to hate in the recent TV series Smash.

Adrian in a self deprecating moment reveals that he is mediocre. Unfortunately, we tend to agree. It was never evident that this effete aesthete had the stones to sweep Lisa off her feet. Even if just for six weeks. It seemed like he was performing a character from The Importance of Being Earnest.

Enter the comic relief of a human hurricane Cory (Elizabeth ‘Lily’ Cardaropoli) who is the ersatz Private Eyes in this play. She’s quite a dame played loud and wide. Her scenes ratcheted up the energy level when all the confusion was inducing us to nod off.

She has just flown in to keep tabs on the philandering Adrian. Matthew has been kicked out of rehearsal while Adrian works with or over Lisa. From her pockets Cory produces a number of little wine bottles she has nicked from the plane. They get pretty pissed.

Given a modest production Patrick Brennan has cleverly created a modular set that provides a number of fast changes of scene. We quickly switch from rehearsal room, to restaurant, shrink’s office and bedroom. It’s all nicely madcap.

Much of the action happens in the restaurant where Lisa may or may not be a waitress. Go figure. During a love triangle they meet for dinner. The waitress announces that there is good news and bad news. They are out of the special but as the millionth customers they will be served a free dinner. This comes with silly New Year’s Eve hats milked for laughs.

Sad to say the costume designs by Govane Lohbauer are rather off the rack or thrift shop. The script suggests that Lisa is stunning but the drab costume she wears for most of the play does little to enhance that. Then in a four year fast forward at the end of the play she appeared in a truly hideous outfit with a long skirt that resembles a well worn Irish sweater. Yikes.

Director Jonathan Croy managed to get the best from an uneven cast. Mostly, he more or less prevailed with a weak and enervating script by Steven Dietz which doesn’t merit being revived by Shakespeare & Company.