Year Tenn and Reading of a Guare Work in Progress 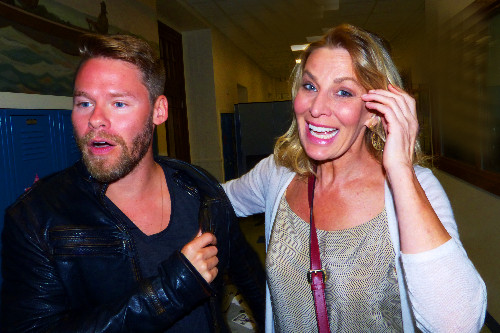 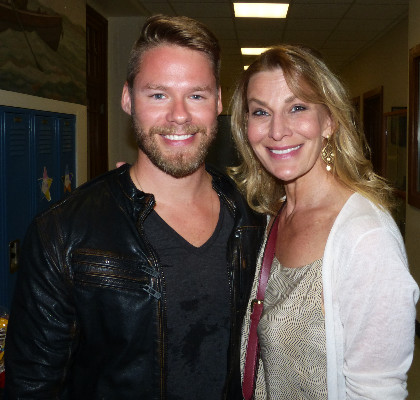 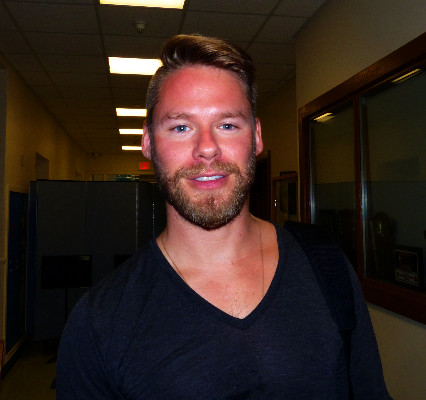 Randy with a beard. 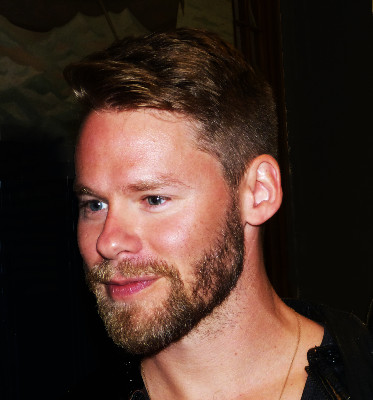 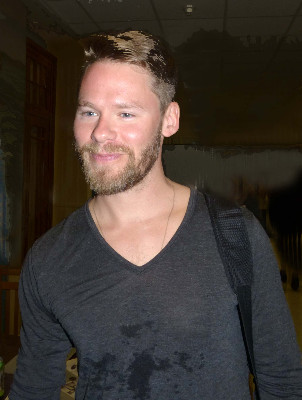 Randy was all smiles on a Sunday morning. 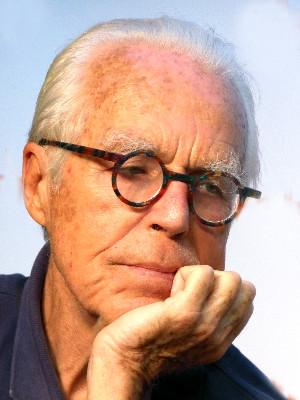 John Guare as Rodin's The Thinker. 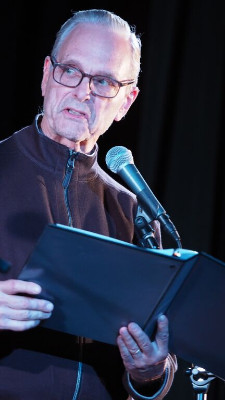 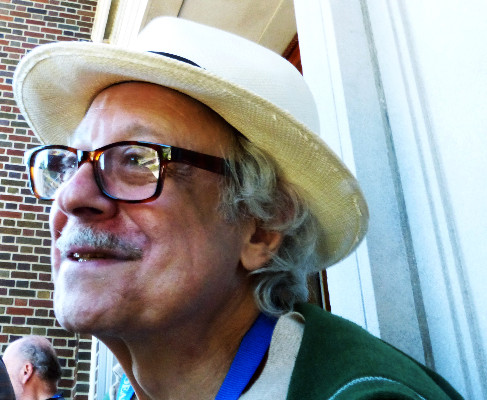 Something old, something new.

Now in its tenth season, the recent Provincetown Tennessee Williams Festival has produced eleven world premieres by the playwright as well as staged works by other playwrights inspired by him.

At Town Hall the festival offered a retrospective of plays first seen in Provincetown.

There was a set consisting of a sharply foreshortened dune shack and next to it a large, abstracted black sun. Onto this was projected the title of each of 15 excerpts.

Groups of actors faded in and out with staged readings.

Over some 90 minutes that was a lot of material to absorb of which I have but sketchy impressions. The few plays which I have seen lingered longer than those I have not.

We have had similar experiences with evenings of ten, ten minute plays. But with 15 compressed into some 90 minutes that was even less time in which to make any lasting impressions. So this was, at best, an enticing evening of Tenn trailers. Unless you were paying close attention to the cheat sheet it wasn’t possible to note when Tenn gave way to the three works by other writers. With the exception of the anchor leg of “Ionesco” they were bunched at the end.

Currently in New York is the hit “Desire” at 59 east 59th street with one each by the playwrights Elizabeth Egloff, Marcus Gardley, Rebecca Gilman, David Grimm, John Guare and Beth Henley.

For this suite John Guare created “You Lied to Me About Centralia,” based on “Portrait of a Girl in Glass.” That story was expanded as the first great Williams Broadway hit and masterpiece “The Glass Menagerie.” The Guare piece is not a rewrite of that iconic play but rather a tangential inspiration.

Guare had been working for some time on “More Stars Than There Are In Heaven” an adaptation of a Williams' short story, "The Mattress by the Tomato Patch."

It is still a work in progress but a staged reading was presented as a part of the festival.

The ancillary characters appear to need more development but the interaction between Randy Harrison (Tennessee Williams) and the mad marxist Zola (Lusia Strus) is just hilarious and seemingly ready for prime time.

Through his agent who was there at the beginning, Audrey Wood (Rutanya Alda), the young writer has landed a dream gig as a writer for MGM at the staggering, for that time, salary of some $250 a week.

Feeling totally unprepared for the job he has taken it on inspired by the fact that Christopher Isherwood, one of his idols (the other was Hart Crane), works for the studio.

Wood even manages an introduction. Even better they end up in bed. That’s how you get ahead in Hollywood where two heads, or kinds of heads, are better than one.

With the smell of cash in his nostrils the young Tenn grabs a cab to Santa Monica with some choice comments on Muscle Beach. But finding a room is much more difficult.

Until he sees a guest being ejected from what proves to be a hot sheet flop house.

The innkeeper, a sharp tongued, feisty Russian, Zola, initially wants no part of him.

She makes more money renting rooms by the hour than for a week or even the three months that the young studio contractor is seeking.

There is a lot of give and take but frankly Strus outscores Harrison. In fact it’s no contest. Her outrageous character is the most amusing I have seen on stage in a long time.

Yeah, ok ok, Randy was great as usual. But damn, that broad’s a hoot. Just let her off the leash and watch her chew the scenery like a ravenous she wolf.

Not so, as I said, for the other characters that pop up but at this point, don’t make a lot of sense. Alexandra Woodruff doubles as Rose the tragic sister of Williams who was lobotomized. She also has a few riffs as Lana Turner who Williams is supposed to be writing for.

The studio is not exactly satisfied with what he is coming up with. Neither is Zola who insists that he join the party and write agit-prop for Greta Garbo. Later, ironically, under McCarthyism that’s exactly what blackballed Hollywood writers were accused of - using film as a medium for leftist propaganda. But Williams had his brief stint as a contract writer way too early for that.

The studio put Williams on unpaid leave. He used the time to work on "Gentleman Caller" which Wood nurtured for Broadway where it opened to rave reviews in 1944 as “The Glass Menagerie.”

There is the character Tiger (Joseph W. Rodriguez) the “King of Muscle Beach” who the tough Zola has kicked to the curb. It is his room that became available for Tenn. Oddly, at this point, it is a role that needs to be beefed up.

If Guare will only listen to me I would tell him to ditch the other characters and reshape this as a one act, two-hander. With the chemistry between Tenn and Zola, based on the laughter we heard yesterday, he has a winner.

So far the dialogue for them is just hilarious. Just go for it. This is a play, if he takes my advice, that has hit written all over it.

Hey folks, you heard it first from P’Town.