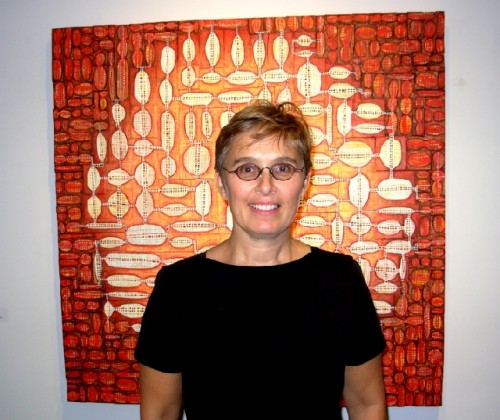 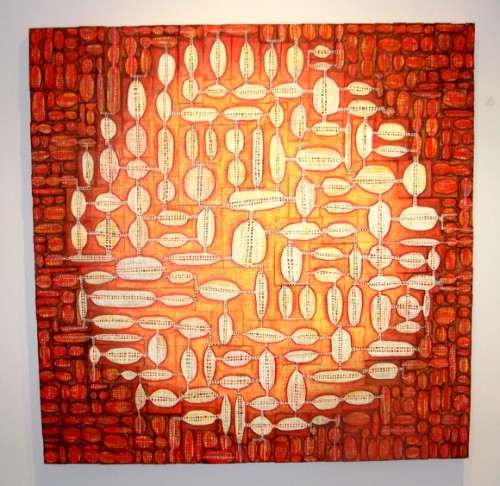 An abstraction with relief by Sarah Slavick. 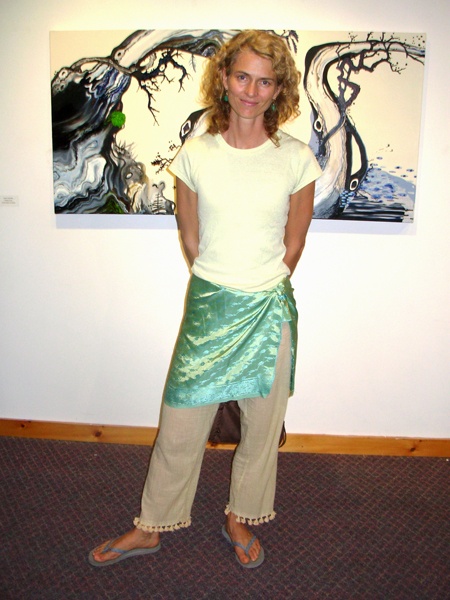 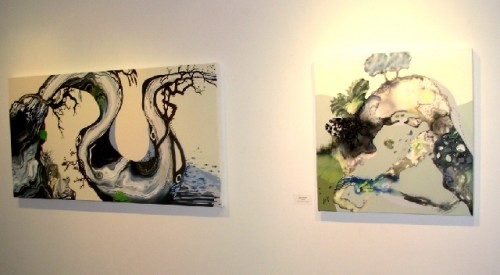 The fluid abstractions of Litchfield conflate East and Western influences. 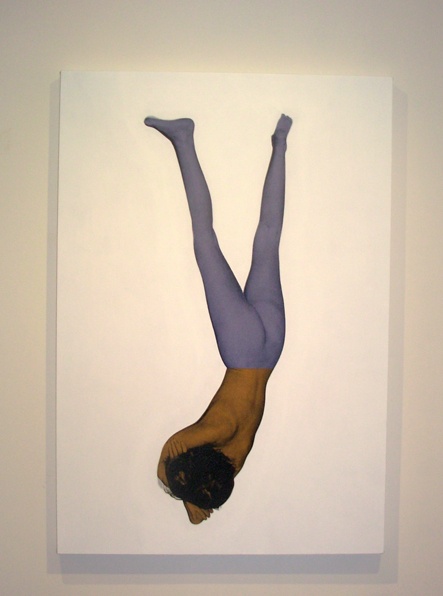 This Frank Egloff painting is an appropriation of an Edward Weston photograph. 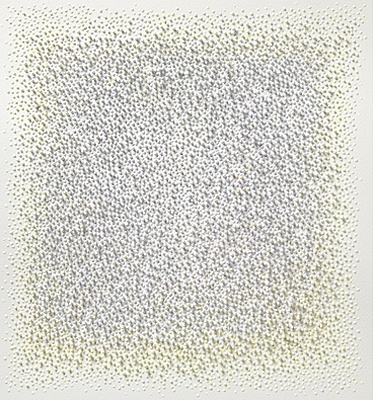 A painting by Masako Kamiya involves raised dots of pigment. 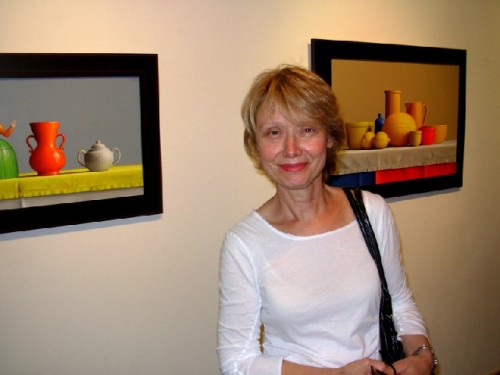 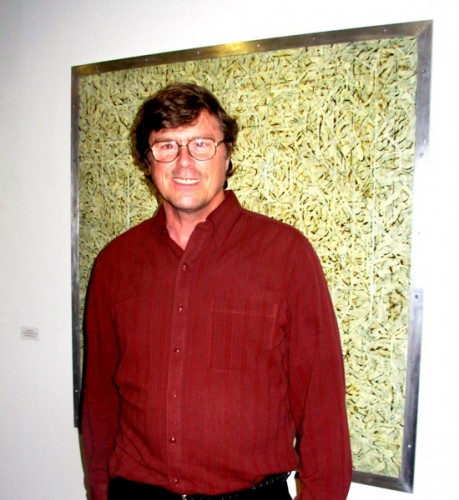 Thad Beal uses math and physics as sources for the paintings. 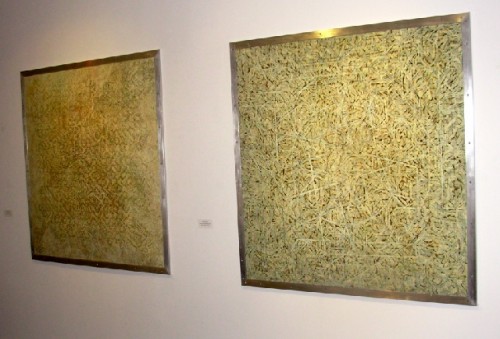 There are two Beal paintings in the exhibition. 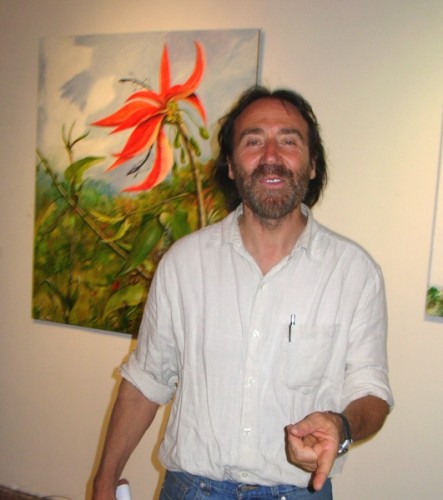 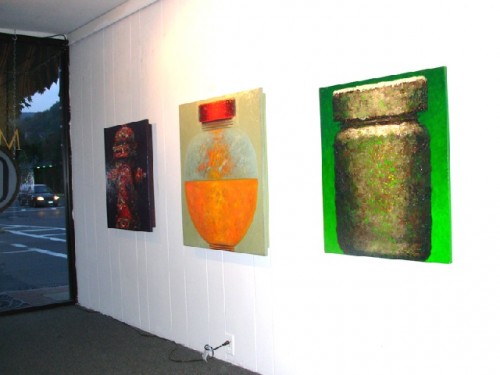 Paintings by Ken Beck are displayed in the window of Gallery 51.

The exhibition "Painted Visions: Paintings by Award-Winning Massachusetts Artists" brings a lively and largely familiar body of work to the downtown Gallery 51 of the Massachusetts College of Liberal Arts in North Adams, Massachusetts. Since MCLA has greatly expanded its mandate for the fine arts this exhibition is of particular relevance to its students and the expanding community of artists that extends to neighboring Williamstown with its fine arts students and faculty. All of course within the large shadow of Mass MoCA.

The exhibition makes a strong and lively point about the vibrancy and diversity of painting at a time when it has been mostly pronounced dead during an era dominated with multi media and cutting edge use of concepts and materials. Dipping a brush into paint, and daubing that onto the surface of a canvas, seems so, well, passÃ©.

Apparently not although this overview favors aspects of recognizable imagery and traditional even academic approaches to art making. The gamut runs from straight up still life to surreal fantasy, fluid mark making, narrative, and forms of abstraction. But the selection is straight forward and enjoyable.

Several of the artists on view are individuals whose work I have followed and written about over a number of years. Always with interest and commitment. So it was fun to welcome them to town. In particular I have written "Beer and Burger" profiles of Vico Fabbris (in Berkshire Fine Arts, archived under People, 07/03/27) and Thad Beal in Maverick #235 in the archive of articles. I have also followed Masako Kamiya and there is a review of her show at Gallery Naga currently up on Berkshire Fine Arts by our Boston correspondent Shawn Hill. Another Naga artist, Ken Beck, is also included in this show as well as Lucy White whose work is well known in the Boston art world although she now lives in Springfield.

In the past year or so Fabbris, who shows with Forum Gallery, has evolved from watercolor on paper to making larger scale works on panel including some examples in this exhibition. While the format and materials have changed the subject matter, botanical fantasies, remains the same. The artist vividly images exotic plants and flowers and creates an elaborate backstory in which they are conceived. They are largely tropical forms that grown out of the rich soil of a vivid imagination.

For this exhibition, Thad Beal (represented by OHT in Boston and Robert Steele in New York) is showing two large squares involving rich and built up surfaces with an embedded structure of fractals below and informing the surface. He both creates and tones down the complex geometrical/ mathematical schemes which have evolved from studies of  experimental mathematics and physics. While this informs his process Beal is also very much absorbed with the challenge of making paintings that are whole and sensual to the eye with juicy surfaces here seen in creamy white textures. He likes to take on complex subject matter but to render it as a visual experience. The paintings function as post modern mandalas for prolonged meditation.

There is similarly a meditative substructure to the elaborate dots of color that formulate into breathing and vibrating fields by Masako Kamiya. She places the materials on a support, here a selection of works on paper, that stand away from the surface and take on a three dimensional physical, sculptural life augmented by cast shadows. Because of how the eye functions the pixilation of the color causes a breathing pulse to what we perceive in these absorbing works.

Frank Egloff, who is seen here with a single work, is one of the Boston art world's best kept secrets and hidden treasures. He has long had the support of the best gallerists including Barbara Krakow and Mario Diacono but has never seemed to acquire the level of status and media recognition that he much deserves. He has been creating meticulously crafted photo realist renderings and improvisations of famous photographs going back a couple of decades. Here he appropriates and reworks a famous image by Edward Weston depicting a vertical view of a woman, nude from the waist up, lying face down on sand. He has rendered her upper back and arms in a dark, tanned tone while her legs, encased in tights, are painted purple. It is a simple, stark and compelling image.

Ken Beck is familiar for making juicy renderings, someway free and painterly of familiar objects. Here one of the paintings appears to be an altered fire hydrant. He likes glossy thick surfaces of paint and gooey colors. The forms are so simple and solid that one feels compelled to grab and hug his endearing objects.

Lucy White had a thing about band aids that has informed her work for many years. If you look, even now, you can see elements that reference these materials and textures. This time the three images are about underwear from and American flag thong to an oversized pair of panties with a menacing message. Her work has an ersatz pop element.

The paintings of Sandy Litchfield involve a very fluid and liquid application of paint which evokes the techniques of Oriental brush painting. If that reference is lost on the viewer she makes it quite literal by rendering some brush or tree elements in a typically Asian manner. But there is more complexity to the color and material than the restricted black and white palette of traditional landscape brush paintings. The works represent a confluence of Eastern and Western elements.

The still life paintings of Janet Rickus are meticulously painted with subtle modeling of objects lined up on a shelf covered with cloth. It is readily understood why the works are admired for their technique but the presentation is so straightforward that it does not evoke deeper or more compelling issues. It is what it is.

There is a complex process involved in the patterned abstractions of Sarah Slavick. If you come up close you can see that the surfaces are built up in relief from a number of cut and assembled elements. Standing away these fall into configurations that create illusions of depth through the intricate use of rhythms and cast shadows. The artist is working simultaneously with issues of paint and color as well as sculptural depth.

William Ciccariello is represented here by several small narrative works evoking vintage images of men cutting blocks of ice from a river. The paintings which offer color and tone that vary from naturalistic representation appear to be based on found photographs from the 19th century. While they are absorbing works it is not entirely clear why the artist has chosen this topic and what information is being conveyed to a contemporary viewer.