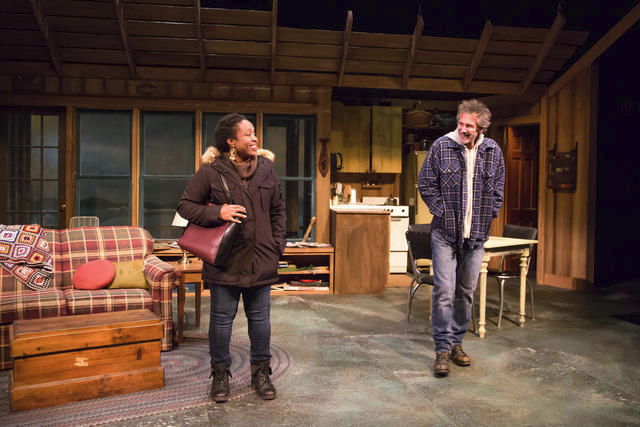 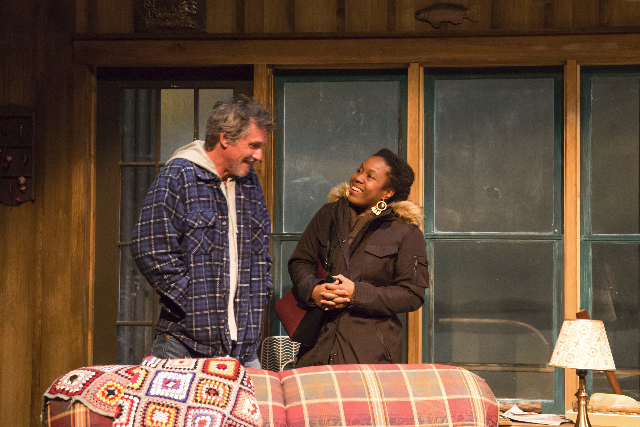 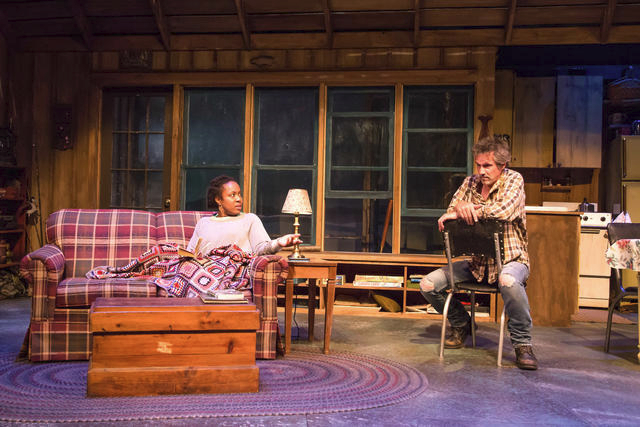 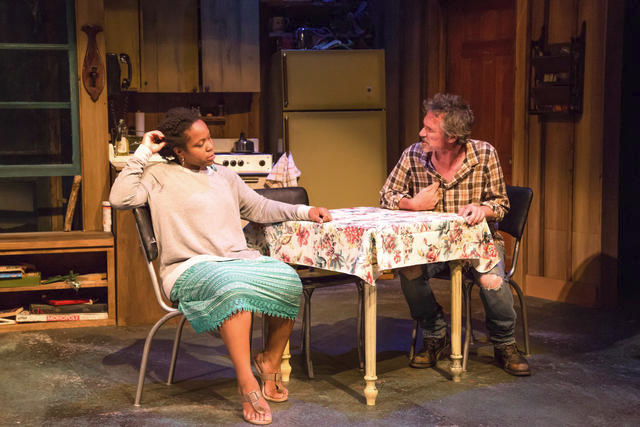 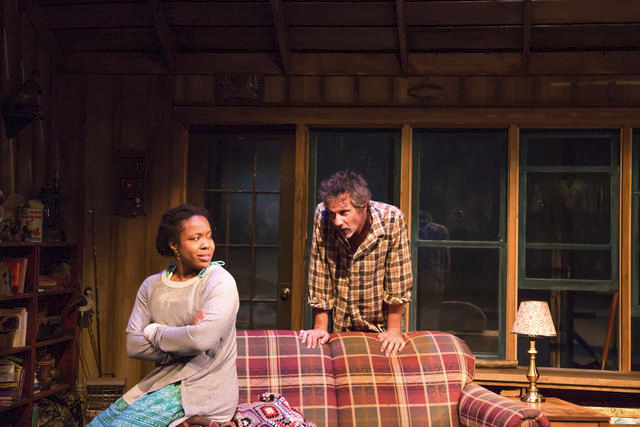 It’s March in upstate New York and a single mom with two kids Veronica (Lynette R. Freeman) has taken a train  from the city to check out a potential summer rental. It is being offered by the scruffy, lanky owner Quentin Mare (Hogan).

She is African American and a nurse practioner. There are slight but specific references to race. They do not appear to be a factor in the interaction of the characters. One wonders about the intent of the playwright in this approach.

The cabin is rustic to be sure but not great on charm.

Set designer Randall Parsons has aptly presented its grungy particulars. There are windows that alternate between hard to wrench open or dropping as precipitously and precariously as the blade of a guillotine. Their ropes and pulleys long gone are replaced by sticks to prop them open.

The couch and cushions are Goodwill rejects.

A compelling feature is a view from the porch of an artificial lake. There is a swimming dock in disrepair. It seems planks have rotted out. The owners association of the enclave has hired him to get it in shape by summer.

It is one of many repairs he promises by August. And by the way, he adds, only use the back burners of the stove. The front ones overheat and cause smoke. He also promises to remove his clothes. With nothing but balky space heaters he has made it through the winter. It’s been mild compared to back in the day when as kids they could skate on the lake. There is a hockey stick as a prop.

When she is in residence, striking a deal proved to be complicated; it is revealed that he is sleeping in his truck. That appears to be his only asset other than a rifle he inherited as well as a share of the house. There is a brother he more or less gets along with and, Deb, his wife with whom he does not.

“She hates me” he says and we begin to understand why.

He has a daughter entering freshman year as a scholarship student at Columbia. Hogan mumbles something about driving down to visit her. It ensues that he is out of contact but, in one of endless delusional musings, he strategizes that she lives in a dorm. There can’t be that many. Although he appears to be broke and down on his luck, to impress his potential tenant, he gushes about taking his daughter and some of her pals to a nice restaurant. Not just for pizza or something.

It doesn’t take long to catch the drift on Hogan. The tattered jeans and ragged shirt, designed by Hunter Kaczorowski, does its job to convey his hanging by a thread character. The hot water tank doesn’t work and one imagines that he is quite ripe. It does get fixed but she demands compensation of at least three days of rent. There is a lot of bickering over money.

Yet again there is distinctive and apt music and sound design by the always remarkable Scott Killian. It enhanced the mood but occasionally seemed over amped for the intimate theatre. The lighting of Patricia M. Nichols defines seasons and times of day.

For the first third of the play it was difficult to be involved or particularly care about this seemingly very ordinary account of a summer rental.

Primarily this derived from taking Veronica at face value. We believe in what reluctantly she is willing to reveal to Hogan. Through her crafty negotiations we assume that she is short on cash and has only a week of vacation time. In addition to her two kids there is back and forth about sleeping arrangements for a friend of her daughter.

We inch toward Hogan taking an interest in the family by his asking if the kids can swim. Of course they can’t. They’re New Yorkers. Typically, city slickers don't  drive or swim but can hail a cab in  the rain and make reservations at busy restaurants.

Hogan insists that it’s just March and the kids can take some lessons in time to safely swim off the dock which he intends to repair.

At a credible and absorbing pace they implode in parallel webs of crippled lives and delusions. Through unknitting of the raveled sleeve of care we are deeply moved by their tender but tenuous concern for each other.

In shattered disarray, surrounded by the detritus of stuff and self esteem, they devolve into mutual meltdowns. For the characters and audience we are left with no answers and dim hints of possible resolution. As in Sartre’s No Exit, it seems that hell is other people.

Both actors were superb and deftly directed at an ever more intense pace by Daisy Walker. It would be difficult to image a more finely nuanced production of a skillful and clever play.