The Revolutionists by Lauren Gunderson 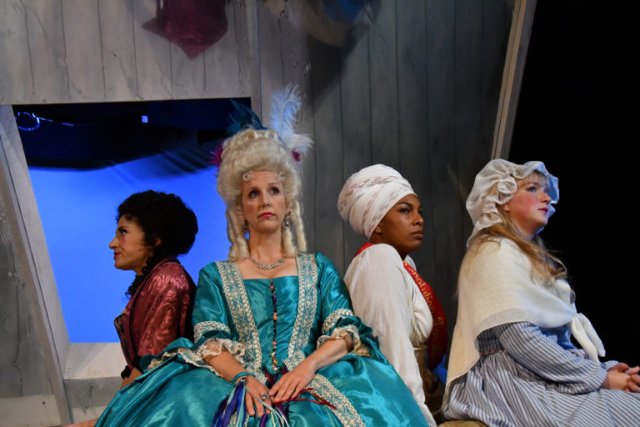 Liberté, égalité, fraternité. From their first utterance in 1790, and despite their tainted origin from Maximilien Robespierre, these three words have represented the highest aspirations of democracy. Yet, their seeming universality was quickly challenged. In 1791, author and political activist Olympe de Gouges issued Declaration of the Rights of Woman and the Female Citizen, challenging the gender bias of the expression and demanding equality between the sexes. She was booed by the French National Assembly, where men found the notion of women’s rights to be ludicrous.

This event is one of the central elements of The Revolutionists, given a bright, riveting production by Town Hall Theatre. Who would have thought that the Reign of Terror would provide such rich opportunity for provocative black comedy? Given the aspiration of theater for relevance in the time of the Me Too movement and a presidency that many feel failed, divisive, and fraudulent, this piece hits the spot. Lauren Gunderson’s thoughtful if imperfect script, director Susan Evans’s deft direction, and wonderful performances by a fine ensemble of actresses, provide a humorous but unsettling effect. The contradiction of the period French costumes and wigs with the spoken modern and racy American vernacular add to the amusement.

For the greater part, history has been made by and written by men. Like Olympe, Gunderson hopes to rectify gender imbalances in some small measure by sharing the stories of four women who impacted and were victims of the French Revolution. Three are historical figures whose deeds are verifiable. In addition to Olympe, they are the deposed Queen Marie-Antoinette and Charlotte Corday, the assassin of the martyred Jean-Paul Marat. The fourth character is Marianne Angelle, a composite of Caribbean abolitionists.

The significant events in the play are accurate, but the overall narrative and fanciful intersections of the characters are a product of Gunderson’s nimble mind. Olympe acts as the fulcrum to the action. Because of her literary fame, each of the others come to her with a need to have something important written by a literary hand. As a result, the Olympe salon becomes the meeting point of these exciting and disparate women. Except for the grand historic incidents, the play revolves around the repartee of various combinations of the women.

Sarah Mitchell sizzles as Olympe de Gouges. With a complex personality, her contradictions abound – one minute self-effacing, the next self-absorbed; one time courageous, the next time shrinking. Mitchell delivers her effusiveness and sardonic wit with the sharpness of a rapier. One wonders if the playwright is writing herself into the role, as Olympe shares the woes of writer’s block and lectures about the importance of the written word and argues that stories trump facts as the words of stories live on.

Marie-Antoinette is perhaps best, but speciously, remembered for the heartless quote “let them eat cake” when peasants were starving for bread. Despite rumors spread by her detractors, Marie was an exemplary mother and generously adopted additional children, including African ones. Here, we are asked to reconsider her. We are captivated by Suzie Shepard’s delightful portrayal of a frivolous royal steeped in the tradition of the greatest privilege, yet a squeaky and adorable woman-child who is concerned about the consequences of her actions.

The other two women are as important to the storyline, but their parts aren’t blessed with the same diversity or oomph. Charlotte is resolute in her assassination quest and doesn’t brook much interference. As the youthful assassin, Heather Kellogg is given a little black humor that she handles well, and she does induce sympathy for putting her life at risk. You may be surprised why a virginity test was deemed appropriate after Charlotte’s arrest. As she wryly notes, “where are the virginity tests for men?” Marianne is the most stable character in the show, a loving wife and good friend with a long standing commitment to her quest. Kimberly Ridgeway is completely on point with her depiction of the earnest and thoughtful freedom activist, but the flawlessness of her moral constitution inhibit her development.  She does have an occasional zinger as when she castigates Olympe for whining over her first-world problem of writer’s block compared to the tragedy of slavery.

Beneath the veneer of the raucous humor lie some important issues to be pondered. Who are the heroes and who are the victims in history, and why do they sometimes change over time? Does the pen dominate sword? Why have women’s contributions not received adequate recognition, and why have they not achieved the same standing as men? Why do the minorities, the poor, and the already oppressed continue to suffer abuse by the privileged?

This is a worthy treatment of a significant, multi-layered play. Its flaws largely pertain to the playwright’s overreach. The devices of history and humor are sufficient to get the points across and advance the main cause of giving women recognition and voice. The metatheatre diversions, such as breaking the fourth wall, a recurring reference to puppets, and the very mention of the word metatheatre, add a few laughs but disrupt the flow without adding value. They are part of the plug for the importance of theater and for the argument that theater is not only for the elite. But when targeted at a theater audience, it’s preaching to the choir.

The Revolutionists: a Comedy / a Quartet / a Revolutionary Dream Fugue / a True Story by Lauren Gunderson is produced by Town Hall Theatre Company and plays at its main stage at 3535 School St., Lafayette, CA through October 20, 2018.

Posted courtesy of for All Events.