A Native Son Returns to His Roots 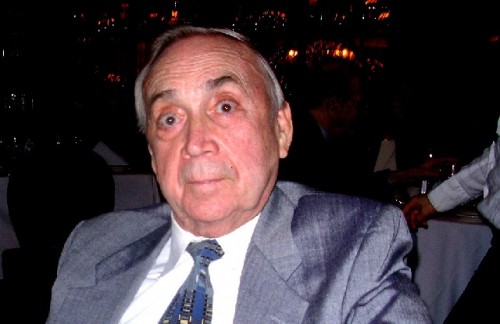 Raeford Liles was just 19 when he enlisted as a fighter pilot during World War Two. Giuliano photo. 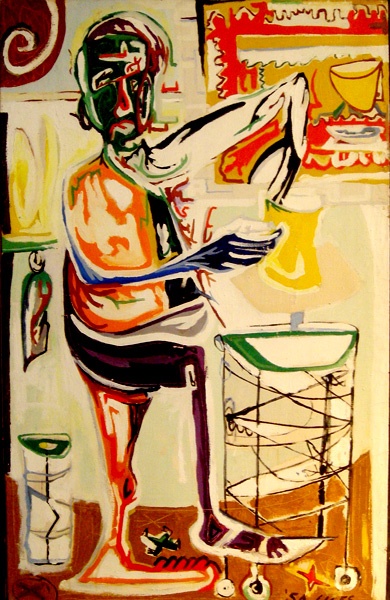 The Potter is an early figurative painting. 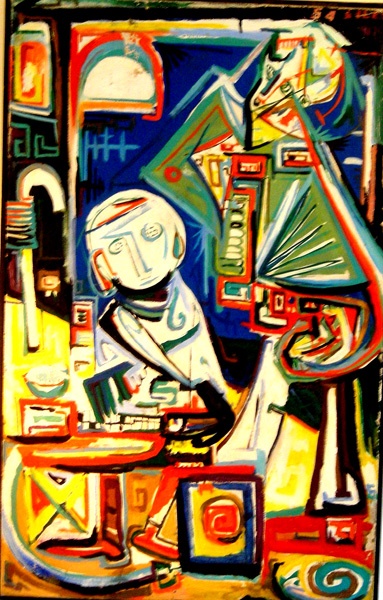 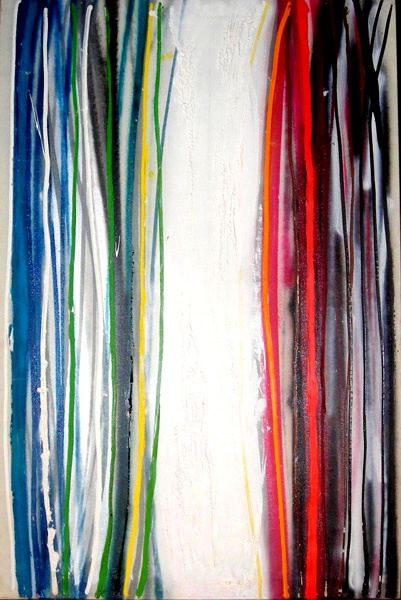 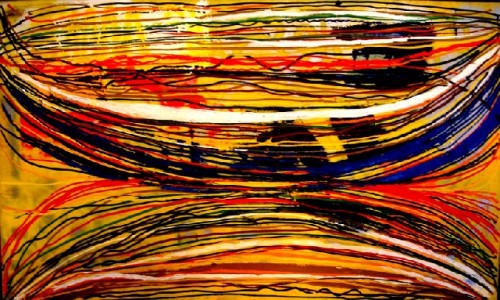 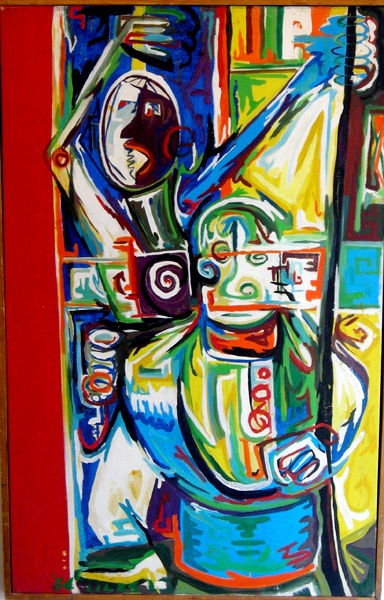 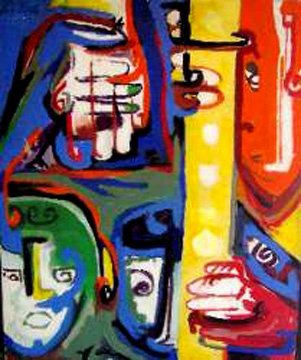 POW from the Vietnam inspired works. 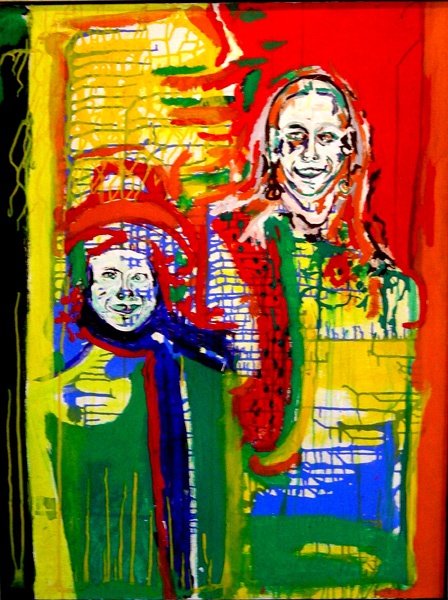 The Sisters from the 1960s combines fluid paint and figuration. 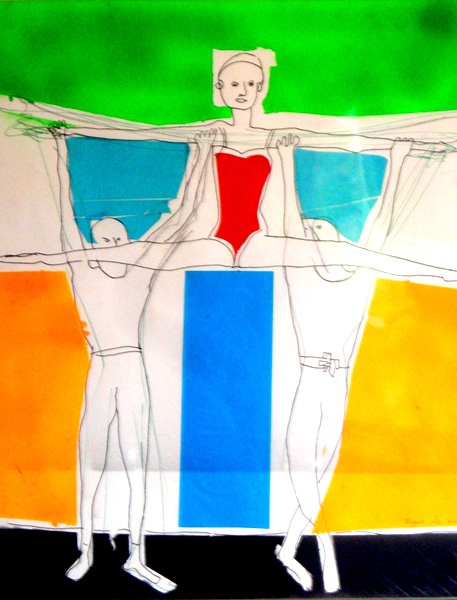 Volunteering for the ballet inspired this series of works on paper. 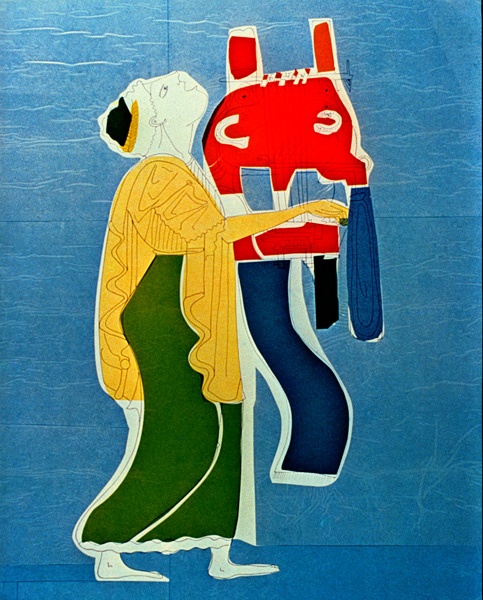 Visits to the Metropolitan Museum of Art resulted in these Greek collages. 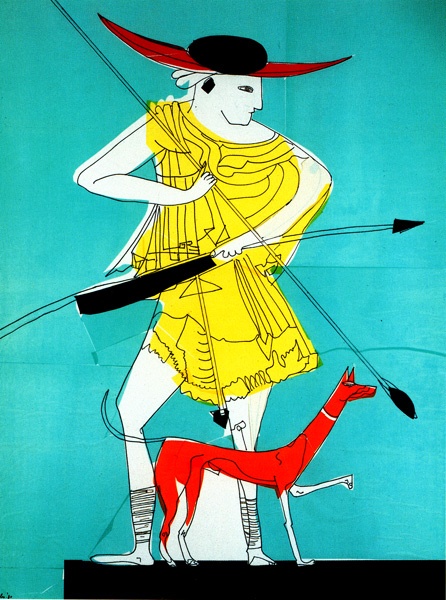 Another work from the Greek series. 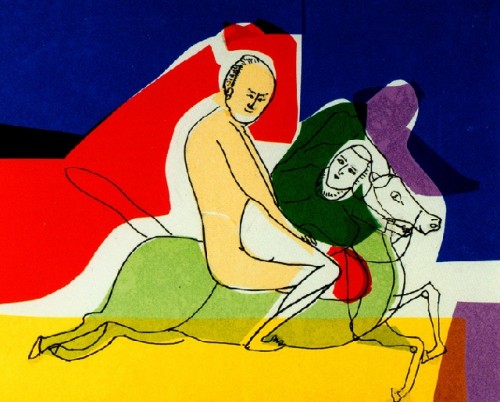 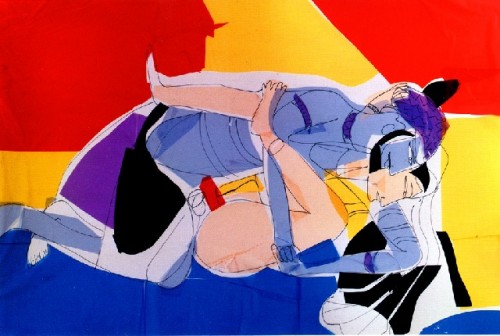 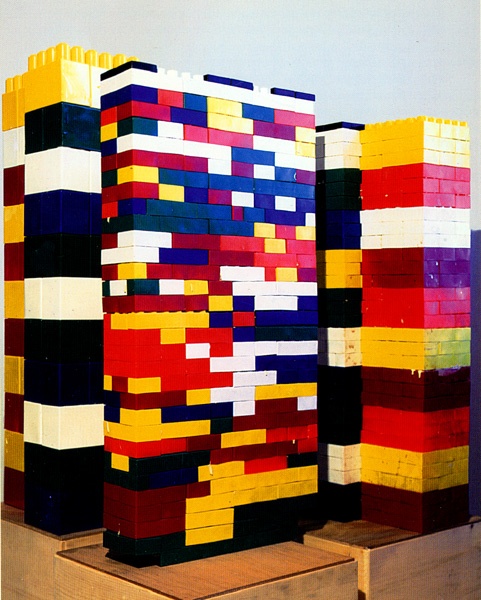 After many years of living in New York City, where he showed with the Donahue Sosinski Gallery (1999, 1997, 1995, 1993), Raeford Liles and his art historian wife, Virginia Rembert, have returned to Birmingham, Alabama where he was born on July 30, 1923. It was challenging to pack up an apartment and a small but densely packed studio on Riverside Drive in Manhattan and relocate back to the South where the couple rejoined friends and an extended family.

Over the decades that I have known him Raeford always managed to create new works in cramped quarters while holding on to paintings from every period that dated to when he studied with the artist Fernand Leger in Paris living on the GI Bill from 1949-51. He and his first wife lived in Paris while he was an Engineer stationed with NATO from 1951-56 and ended his Government position with the rank of Colonel in 1961. Upon retiring he lived in New York on his military pension.

We caught up in the turbulent 1960s when I was the assistant director of the East Hampton Gallery in New York which was primarily known for representing the leading artists of the Op art movement including Ben Cunningham and the Canadians Guido Molinari, Claude Toussignant, Marcel Barbeau and Jacques Hertubese. It was for East Hampton Gallery that I curated the first exhibition of Psychedelic Art called "The Visionaries" which became the basis for the Grove Press book "Pyschedelic Art."

The work of Liles did not fit the profile of what the East Hampton Gallery represented. All these years later he continues to be a misfit in the convenient categories of the art world. As I soon discovered when I visited the studio to prepare for an exhibition of the artist's "Angry Art." In the small, cramped loft, cold water flat with a bathroom in the hall, and no kitchen, the artist poured whiskey, regaled me with the stories that continue to fascinate me, and cooked a delicious gourmet meal with an electric frying pan. After dinner he demonstrated his technique by rapidly producing a painting. Inspired by  the Color Field painters of the time, which in his Paris series actually anticipated the techniques of poured and sprayed paint, he applied fluid acrylic to the canvas turning it rapidly to accentuate the flowing patterns of richly saturated, high chroma colors. He was evoking the color of blood and explosions of napalm occurring in the regular bombings of Vietnamese villages. It was the painted equivalent of the famous line by the Robert Duvall character in Apocalypse Now "I love the smell of napalm in the morning."

The protest painting of Liles had particular relevance because he suffered from what today would be identified as Post Traumatic Stress Syndrome. It resulted from his years of service 1942-1946 as a fighter pilot in the Pacific Theatre. As a member of a Southern family with a strong military tradition he enlisted at 19 and survived four years of combat. So the anger he felt about the Vietnam War was genuine. The paintings which resulted were quick and violent with an enormous visual punch. Of course they were not commercially viable but they should be appreciated as significant statements of the trauma of that era and as part of an important artistic and historical legacy.

What typified the protest paintings and his oeuvre in general has been a commitment to experimental techniques and speed of execution. There has been a consitent striving for immediacy and an economy of means, as well as, elements of humor, playfulness and whimsy.

When the war ended there was an inevitable change of subject matter. And changes in his personal life. At a social gathering he met Sylvia Pizitz, a fellow native of Birmingham, who lived in New York. While he continued an independent life and worked during the week in his studio near Times Square on the weekends he stayed with Sylvia where he cooked wonderful meals. They enjoyed travel, theatre and ballet. Well on in their relationship he moved in and they married not long before she died. She brought compassion, security and stability to his life and that was reflected in the different bodies of work which ensued.

He became a volunteer for the New York City Ballet and enjoyed access to the studio and rehearsals. This inspired the "Ballet Series" and the beginning of works on paper that combined simple line drawings of ballet movements with overlays of colored gels used by graphic designers. These were followed by visits to the Metropolitan Museum of Art where he studied aspects of the collections. There were series based on the Greek Pots, Chinese Paintings and then Asian Erotica. Much of this work was shown with great success in New York in solo and group exhibitions as well as in numerous small college and traveling shows.

During visits to the studio the artist was excited by gadgets and inventions often acquired cheaply during visits to Canal Street. These would arrive in the mail and Liles spent a lot of time and money at the post office sharing his discoveries with friends. You came to expect just about anything.

It was out of this playful pursuit that the Lego Sculptures emerged which were shown in 1999 at Donahue Sosinski. He discovered that he could use the children's toys to make sculptures with unique patterns and designs. Because relatively few have survived they have become a rare and collectable aspect of the artist's work.

When Sylvia passed away there was difficulty and stress of settling her affairs. She had assembled a significant collection of abstract works in white. It was always amazing to see the paintings and relief sculptures in the New York condo. She had collected all of her adult life and knew many of the artists whose works she acquired. These included Ilya Bolotovsky, Burgoyne Diller, Nassos Daphnis, Josef Albers, Jean Arp, Lazlo Moholy-Nagy, Robert Dalaunay, Sophie Tauber-Arp, Charmion Von Wiegand and others. The major pieces went to leading collections including the Museum of Modern Art and the Whitney Museum of American Art. During her lifetime Mrs. Pizitz was also a generous donor to numerous regional museums and college collections. On every level Sylvia was a remarkable and daunting presence.

In addition to being an artist Liles is also an inspired and inventive cook. He collaborated with a friend Moira Hodgson, a food writer for the New York Times, to co-author the Campus Cookbook. Many of the recipes were concocted on that legendary electric frying pan back in his Times Square loft. Moira hosted elegant dinner parties after his New York openings and I would come in from Boston to attend the celebrations.

After one of these Saturday night gatherings Liles wanted to host a brunch at a Chinese Restaurant in the Upper West Side. He was very proud of remaining in superb physical condition. Part of that military heritage. There was this thing where he liked to put his arms around me and lift me up. I am a rather large man and this was an impressive feat. Not that Sunday morning. Something snapped. I had to run to get the bus home but found out later that he had gotten quite ill.

But every cloud has a silver lining. One of the guests that morning was a lady from Birmingham he had invited to the gathering. Virginia took him home and nursed him through a tough recovery. Eventually they married and I got to take the pictures at their wedding. But he no longer attempts to sweep me off my feet. For that he now has Virginia.

So there is a retrospective in Alabama where he may just be that state's greatest living artist. More than that Liles is one of a kind. Y'all come back.