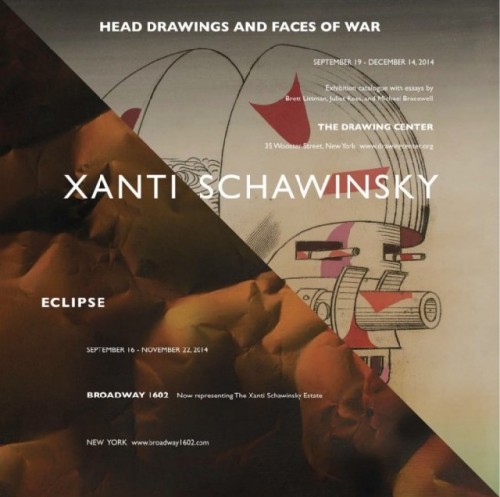 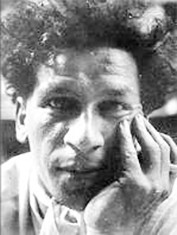 Portrat of the artist. 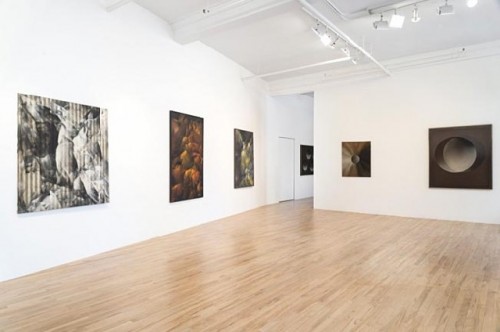 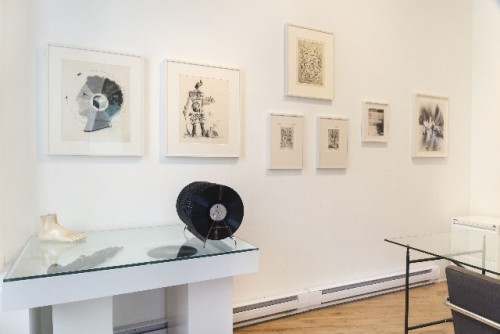 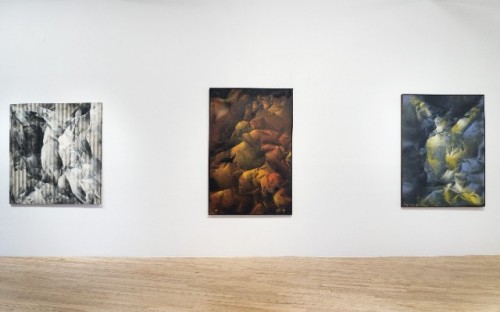 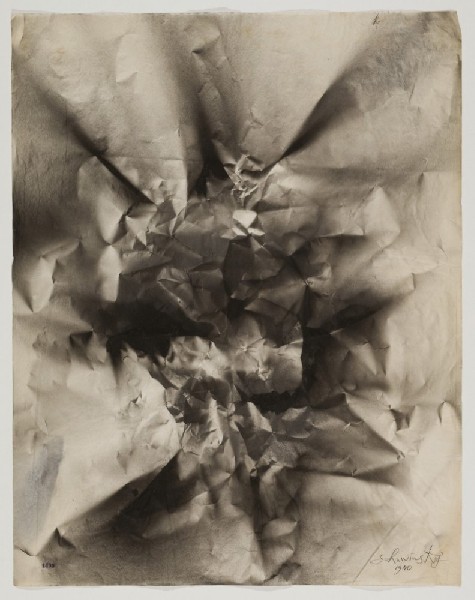 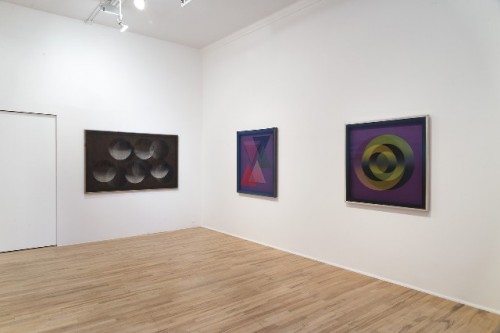 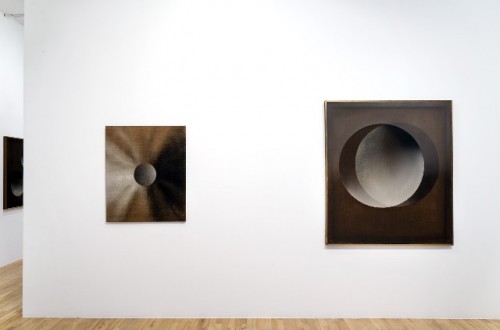 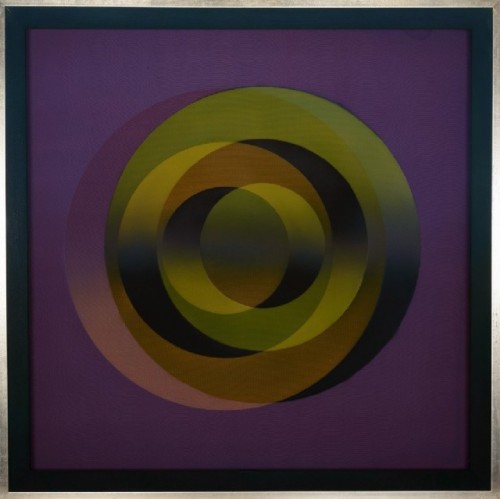 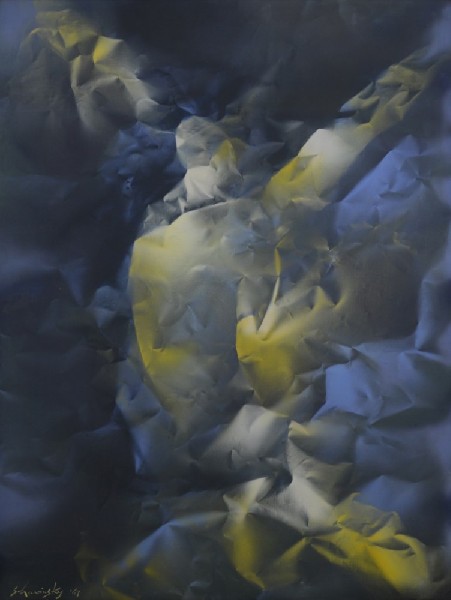 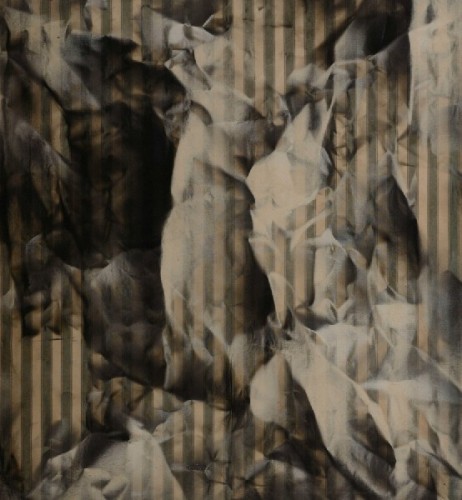 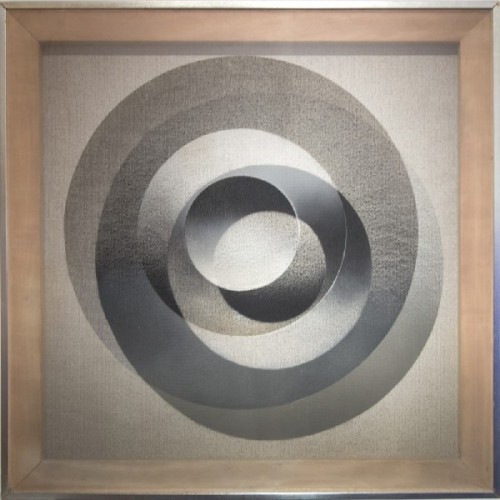 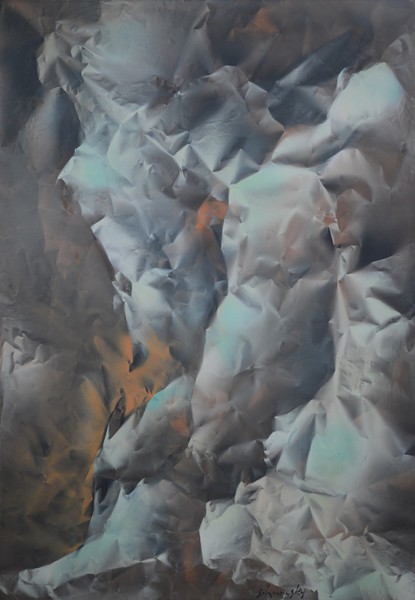 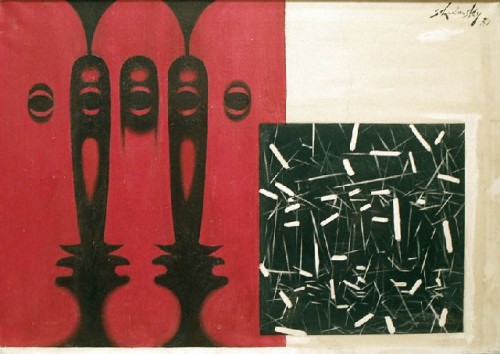 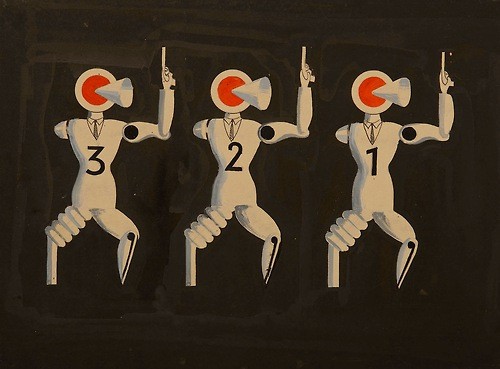 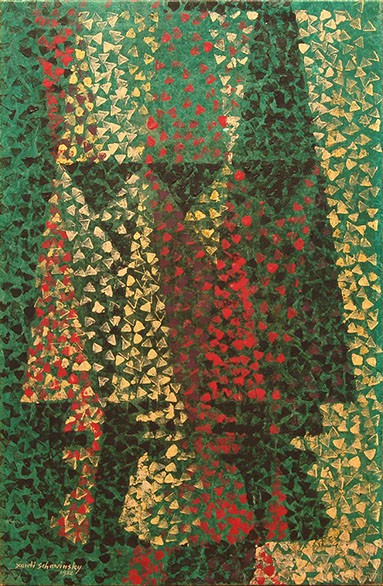 Bauhaus artist Xanti Schawinsky (1904-79), of Polish-Jewish origin, immigrated in 1936 to the United States. After his years at the Bauhaus he continued an intense and ultra creative journey from his radical post-Bauhaus theater work at the Black Mountain College, the innovative designs for the New York World Fair in 1939, to his unparalleled surreal drawing and painting work throughout the 1940s influenced by war and immigration (on show at the Drawing Center in tandem with our exhibition). In the 1960s Schawinsky entered a new phase of creation with an intense and enigmatic body of work of abstract and optical paintings, the Eclipses and Spheras.

The first experimentation of the Eclipses originates in the 1940s as early airbrush works on paper. Schawinsky crumbled and airbrushed the paper to a dramatic landscape of structures in which he achieved a delicate balance of chance operation and compositorial control.

The expressive character of the early Eclipses was timelessly enhanced in the 1960s Eclipse paintings when this experiment came to full unfolding. In prominent tableaux of dramatic color and from compositions Schawinsky created abstract landscapes with strong illusionary underpinnings. In some Eclipses we experience a sense of anthropomorphy, an existentially stripped figure dominating the scenery in a trapezoid stretch reminiscent of a dancer or stage figurine. The pre-dominant allusion in the Eclipses is the one of mountain landscape (and as the experiment started in the 40s the artist probably had strong reminiscences in exile of his early life exposure to the mysteries and stern beauty of the Swiss alpine world). This is the moment where the Eclipses and Spheras have an intimate connection in the experience-based vision of the artist as one form experimentation morphed out of the other.

“As he experienced a total Solar eclipse in the mountains of Canada he began the series: Eclipse. Upon finding he had worked through this expression and he added two colored circles partially overlapping. Two spheres moving in space, overlapping and creating a quality that is like no other; enigmatic as would be agreed by anyone who has experienced a total eclipse.

These spheres then morphed into leaving the mountains behind and he drove headlong into the Sphera series, searching through the magic of overlapping donuts and spheres, colors, and shapes. This metamorphosis began during the 1960’s as many people were expressing and experiencing deeper/higher states of existence. The exploration of that which is beyond our day-to-day awareness was accelerating. Quantum physics was coming into its own, as we understood that life is more mysterious than we thought and imagined.

We have full understanding of and control over the first, second, and third dimensions and the fourth, in which we are steeped, is enigmatic. Xanti painted and airbrushed the Spheras on two surfaces, one being a translucent screen, giving us the illusion of a third dimensional image and as we move sideways the image moves with our vision. We are presented with an extra dimensional experience, causing a resonance with our fourth dimensional paradox.”

The Spheras can also be seen as a logical yet new and far more existentially felt continuation of the Bauhaus teachings on geometry, optical and color theory. Xanti Schawinsky always linked existentialism with science and the effects of industrialization. Already in his Bauhaus plays and in his design work the underlying contradictory forces of the man-machine fusion were present, however in a playful, nostalgic and optimistic manner. At the Black Mountain College he fully explored the potentials of his abstract theater concept Spectodrama, but also – to the surprise of the students – introduced retro-medieval motifs of the Dance Macabre. In 1941 Schawinsky created in New York two drawings, which likely were commissioned illustrations for some branch of U.S. industry in the aftermath of his prize winning exhibitions designs for the World Fair in 1939. These drawings, like in many of Schawinsky’s works, subtly shift status between design and autonomous artistic vision.

One of the drawings is inspired by his Untitled (Spectrum Color Head) from 1935, a stylized self-portrait in the form of a painter’s palette segmented in a post-Bauhaus educational color spectrum. A Bauhaus artist in political exile re-assuring his identity. The piece was created in his last year in Milan. For the drawing from 1941 Untitled (Spectrum Head Industry) Schawinsky chose a woman for the stylized palette-head. In the segments of the head we see illustrations of different stages and areas of industrialized paper production. Inside of the center hole of the palette he drew a cardboard box. In the next drawing the box becomes the head of an eerie giant figure with ‘tree-legs’ holding an axe, the body composed – with high allegorical tension for a design work of an underlying tension between nature and industry. “The drawing reminds me of the Tin Man in the ‘Wizard of Oz’ but with overtones of eco-agitprop reminiscent of late Kraftwerk” (M. Bracewell).

Subsequently in the 1940s in his Faces of War the man-industrialization fusion turns dystopian as the death machinery of war. In his Head Drawings of the same time the inside of the giant heads are opened up like metaphysical ‘windows’ for the viewer showing abstract landscapes and sceneries. Poignantly, fragments of Schawinsky’s Head Drawings with these elaborate visions of the modern ‘brain’ structure were used to illustrate an article in the late 40s on the new and first IBM Selective Sequence Electronic Calculator, an early computing device.

The spirit of the 1960s abstract paintings, the Eclipses and Spheras, has a clear continuation of Schawinsky’s vision, experience and experimentation. However precise and educational – in the sense of the Bauhaus legacy – his intentions were in the advancement in techniques and execution, e.g. demonstrated in his seminal text “About the Physical in Painting” (Great Britain,1969), Schawinsky never fully revealed the methodical process of the Eclipses. He always kept some mystery in his work.

Xanti Schawinsky was a genuinely “channeling artist” of the 20th century.

Special thanks to Benjamin and Daniel Schawinsky for their contribution to the exhibition.