Remembering a Patron of the Arts 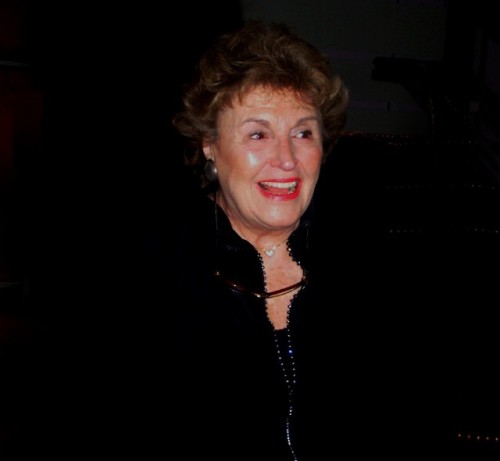 Elayne P. Bernstein was a patron of the arts with a particular commitment to Shakespeare & Company. Giuliano photos. 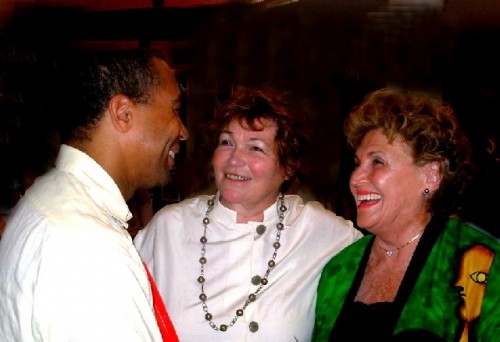 Shakespeare & Company is deeply saddened to announce the passing of its dearest friend, Elayne Polly Bernstein Schwartz, on October 4, 2011. Born in 1924, in the Bronx, NY, she spent the first six years of her life in China with her family. This remarkable woman was one of the most avid and generous supporters of the arts and humanities throughout the Berkshires and beyond --  including Great Neck, NY, New York City, Sarasota Florida, and as far away as Israel. Elayne’s philanthropy and friendship have had a profound impact on tens of thousands of individuals all over the world and especially amongst the artists and teachers at Shakespeare & Company, whom she so graciously considered a part of her family.

Elayne was involved with many Berkshire cultural organizations which she cherished and supported, including Jacob’s Pillow, Barrington Stage, Berkshire Theatre Group, Tanglewood, and Norman Rockwell Museum among others.  But her overriding passion revolved around Shakespeare & Company.  As an active member of the Company’s Board of Directors since 1998 Elayne worked tirelessly to bring the power of Shakespeare’s words and world to everyone she met.

She delved into the arts during her late teenage years and early 20’s working for a time as a singer, performing on 52nd Street at the Zebra Club and the Onyx Club on the same bill with L enny Bruce. Her love for Shakespeare started in her middle years when she registered as a student at Queens College while raising her five children. She had always wanted to study theatre and the great playwrights in depth and, like everything else she did in life, she threw her entire being into her courses with reverence and ceaseless energy.  Elayne often said, “I came to it late – but it filled my life thereafter.”  In 1983, Elayne – together with Norma Reiner – launched the “Backstage in the Berkshires” program at Queens College , bringing numerous groups of adult education students to Shakespeare & Company’s plays and events for almost two decades.  Artistic Director Tony Simotes , Founding Artistic Director Tina Packer , and Company founders Kevin G. Coleman and Dennis Krausnick , to further the interest and passion in Shakespeare that Elayne distilled, would talk to the Queens College students after the performances and infuse them with Elayne’s passion for Shakespeare.

Her special focus at Shakespeare & Company was its Education Programs: “If we can get the kids inspired early on, it will stay with them all their lives”.  Over the years, she contributed substantial funds toward the Company’s nationally acclaimed and award-winning Education Programs and her own grandchildren participated in the Riotous Youth summer sessions. Elayne constantly encouraged everyone she knew, including board members, community members, family and friends, to support the programs and to personally attend the program’s performances like the Fall Festival of Shakespeare and the Riotous Youth presentations.

“I believe we take into our hearts those people who awaken in us a glimpse of what is divine,” said Kevin G. Coleman, Director of Education.  “I believe there is a place in our hearts that is made to hold and cherish these rarest of people. I believe these people often change us forever, change us for the better.  I believe that, for so many, many people, this was – and continues to be – Elayne.”

Bernstein's support for Shakespeare & Company increased exponentially in 2008 when she became the chief contributor for the conversion of the former sports complex on the Company’s 33-acre property into the Bernstein Center for the Performing Arts, which includes the Elayne P. Bernstein theatre, state-of-the-art rehearsal and performance rooms, scene and costume shops, extensive production spaces and offices. Most recently, Elayne’s Corner, a special garden with seating, a fountain and beautiful landscaping was created in front of the Bernstein Center for the Performing Arts.

When she married Sol Schwartz in 2004, Shakespeare & Company organized the event – disguised as her 80th Birthday Party.  In Sol, himself an artist, she had found a soul mate who loved the arts and Shakespeare & Company much like she did.  In particular, Sol shared her passion for both the Education Programs and the beautification and development of the property.  Together they forged a joyous life of common interests in the arts, not only in L enox, but in Sarasota and New York City as well. Sol has drawn countless Company artists along with many portraits of Elayne over the years,  renderings which are currently on exhibit in the Iredale L obby of the Bernstein Center for the Performing Arts.

Elayne not only infused Shakespeare & Company with her boundless energy and commitment to theatre and theatre in education, but her enthusiasm carried over to her entire family, all of whom developed deep connections to the Company as patrons and as major supporters.

“Our mother’s passion for Shakespeare’s plays, their stunning language and universal themes knew no limits,” said Elayne’s children.  “And in Tina Packer and Shakespeare & Co. she found the perfect partners for savoring his works in performance and ensuring that people of all generations could take joy in them.  For her family, Shakespeare & Co, its visionary leaders and extraordinary performers, created a home away from home.   We are so proud that this most important of her legacies resides with Artistic Director Tony Simotes , Kevin G. Coleman and their colleagues.”

“Elayne has made an indelible mark on our organization that will never be forgotten,” says Artistic Director Tony Simotes .  “I cannot imagine how the Company could have managed without the Bernstein Center – the rehearsal rooms are always filled with a myriad of programming 12 months of the year involving children, adolescents and professional actors. Just a few weeks ago Elayne even worked with some of our actors on tap dancing steps for The War of the Worlds, which she taught sitting in her chair. Extraordinary! I read once that ancient Egyptians believed that upon death they would be asked two questions and their answers would determine whether they could continue their journey in the afterlife. The first question was, “Did you find joy?” The second was, “Did you bring joy?”  To me, this encapsulates the essence of who Elayne was – finding joy in everything she did and wherever she went and bringing joy to each and every person she touched along the way. We will miss her greatly but her spirit will always soar with us.”

“I have lost the person who supported me longer than anyone has ever done and who understood on every level what we are doing,” says Founding Artistic Director Tina Packer . “I lost a dear, dear friend and mentor who lived her life with vigor and meaning and passed it on to everyone she came in contact with.”

Elayne possessed endless grace, charm and a sparkling sense of humor which charmed all who met her.  She relished seeing Shakespeare’s work performed on our stages, especially by our youngest artists. Elayne will be sorely missed by the entire arts and cultural community in the Berkshires. Her impact will live on for generations to come. We will remember her always.

“Shakespeare & Company, and all of us who knew her, were blessed to have witnessed Elayne’s passion for life and for learning,” said Board Chairman Richard A. Mescon.  “The Bernstein Center for the Performing Arts, the Elayne P. Bernstein Theater and, especially, Elayne’s Corner are the tangible ways the Company has honored her. But the highest honor, to which we commit ourselves and the Company, will be to continue the work and the programs that she inspired and helped guide.”

Former Board Chairman Michael A. Miller adds, “Elayne's wisdom, generosity and dedication were an inspiration to me and the Board during my tenure as Chairman and she will continue to be a motivating force for our company.”

“Elayne Bernstein brought joy to my life every time I saw her: she taught everything she learned,” says Director of Training Dennis Krausnick.  “I think the thing she knew most deeply was how to live life unstintingly and she taught that by example to every one whose path she crossed.  And finally, in her passing, she taught us how to embrace life.  She and Sol have made and continue to make this world a better place.”

…But thy eternal summer shall not fade,
Nor lose possession of that fair thou ow'st,
Nor shall death brag thou wand'rest in his shade,
When in eternal lines to Time thou grow'st.
So long as men can breathe, or eyes can see,
So long lives this, and this gives life to thee.