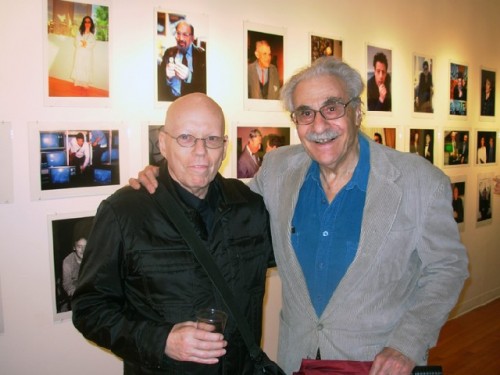 Arnold Trachtman and Paul Laffoley (left) at the opening of my photography show at Suffolk University. Giuliano photo. 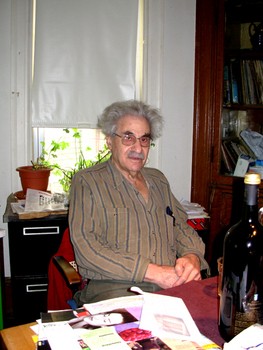 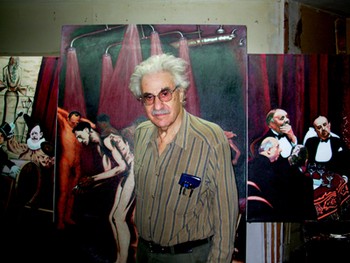 The artist in his Cambridge studio. 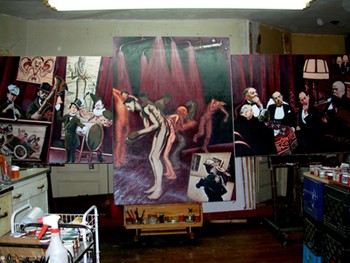 The triptych Cabaret from 2006. 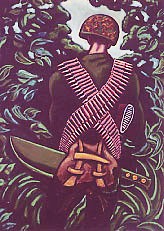 Defender from the Vietnam period. 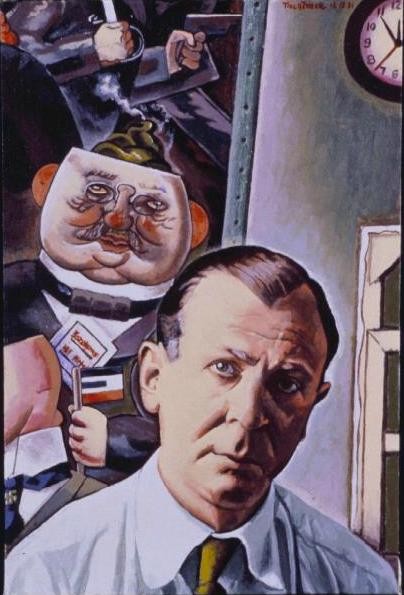 A portrait of the German artist George Grosz. 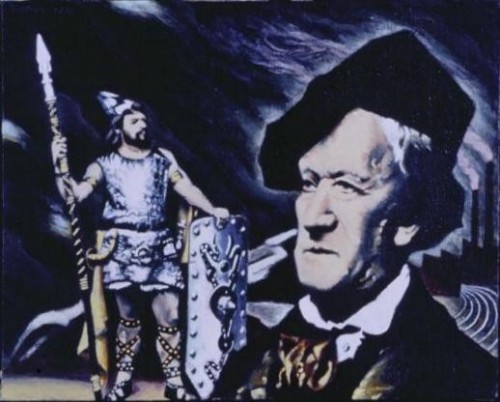 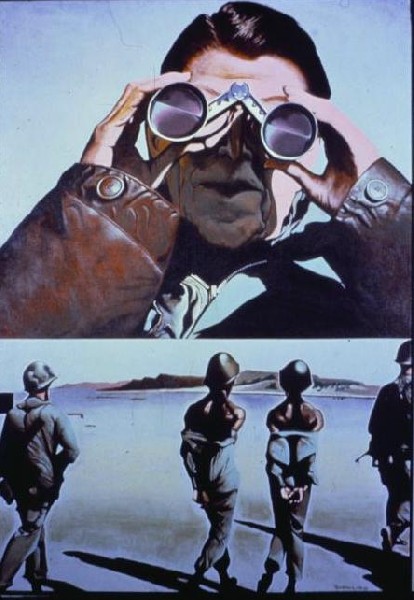 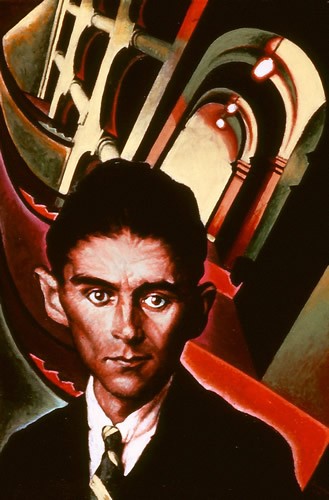 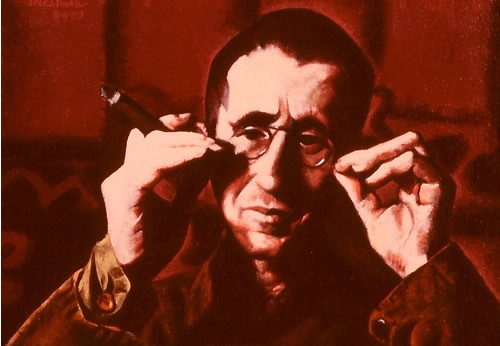 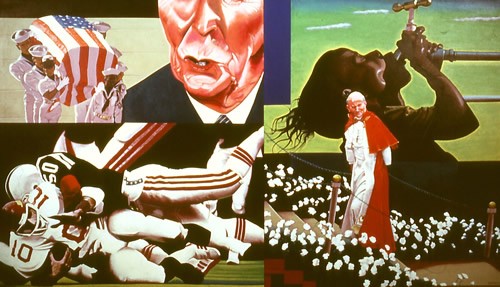 Another Day Another Dollar. 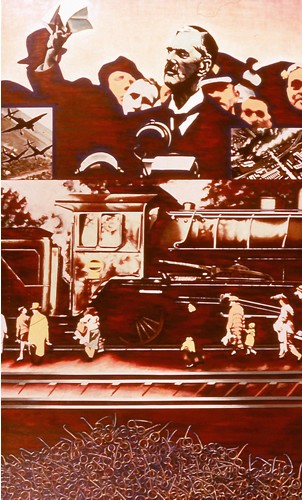 Peace in Our Time. 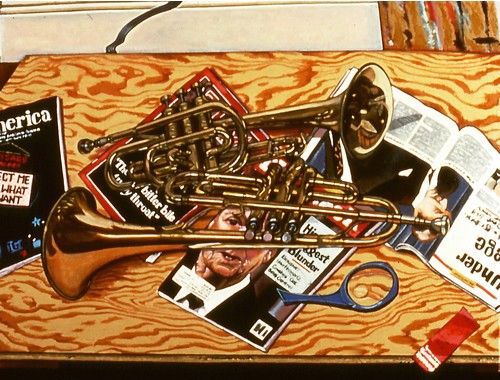 Save Me From What I Want. 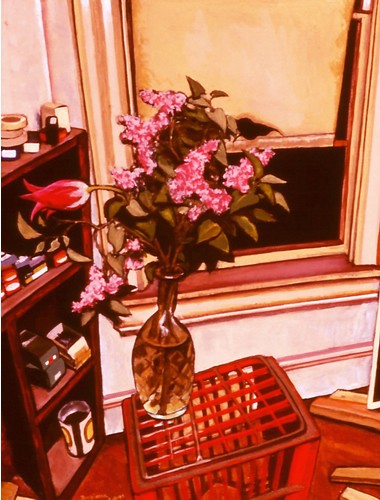 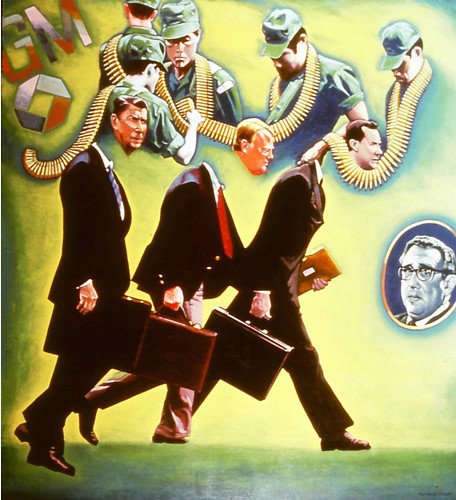 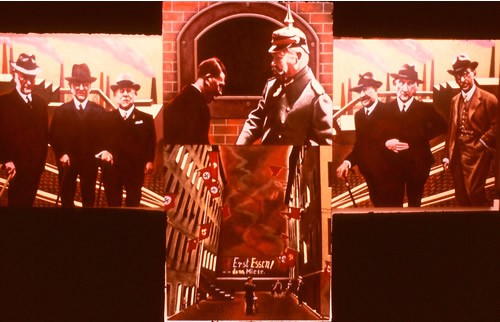 Roots of the Fuhrer Principle. 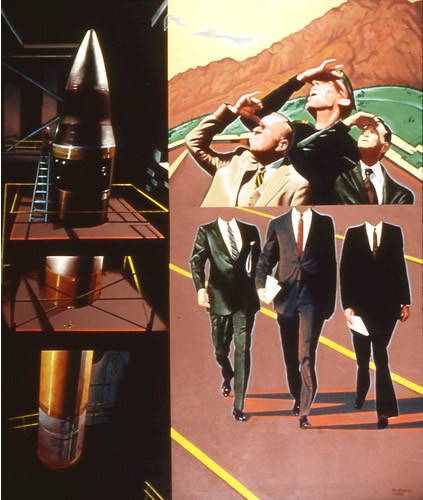 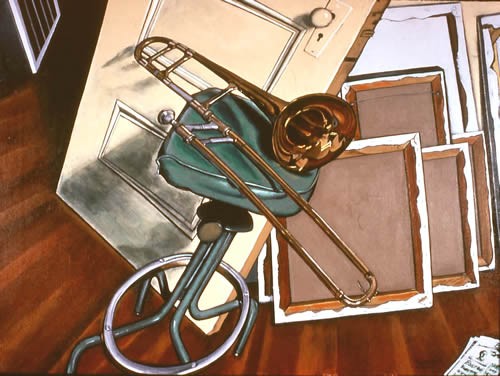 Trombone in the Studio. 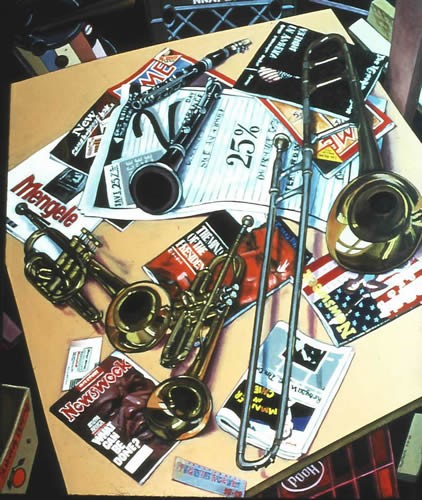 The other night, Tuesday, October 5 there was a gathering at a Chinese restaurant just off Central Square in Cambridge to celebrate the 80th birthday of the feisty, unrepentant, protest painter, Arnold Trachtman.

"I was born in the United States, three years before the Nazis came to power in Germany. I was lucky. I grew up in the 'Arsenal of Democracy.' And yet it was not always safe. Anti-Semitism thrived here. At any time you could be attacked, verbally, physically or both, by kids your own age or older, and sometimes by adults. The end of the war came with newsreels of the camps and the infinite mounds of the dead being bulldozed into great pits. The survivors looked just barely alive. Their pain was palpable. When I found my direction as an artist, I made work about issues of the day. While pursuing these themes, I found myself continuously drawn to the history of Nazism. Yet it did not appear in my work. I wasn’t ready. In late 1985, I was. What I wished to do was demystify the demonology of Nazism. I wanted to show the men behind this great engine of genocide: the major industrialists and corporations of Germany, such as Thyssen, Krupp, Daimler, Benz, Siemens, to name a few. Ten years after the war, all of them were back in business. Understanding the epoch of Nazism, economically, politically, and socially, is part of the unfinished business of our era. As this century draws to a close, aspects of Nazism are manifesting themselves in various parts of the world. We must penetrate the darkness of our past in order to have a future." Artist's statement.

The next morning Mark Favermann, a mutual friend and Berkshire Fine Arts editor, called with a report of the event. He described the late arrival of another octogenarian, my former professor, the wise and witty painter, Arthur Polonsky. How I would have loved to have been there and share in the memories and anecdotes.

Apparently Arnie asked  Mark which of us would write about him. Mark was supposed to cover his show at Caladan Gallery this past summer. Now it’s my turn.

Mark and I first met, decades ago in the early 70s, when Joan and Arnie invited us to dinner at their home, 27 Dana Street, in Cambridge. Back then, they had recently moved from a cluttered apartment. I helped haul the paintings. What were left after a fire wiped out the early work. Mark was then the director of the Boston Visual Artists Union. Later, we were colleagues and columnists for Art New England for many years.

Arnie and I got to know each other in the 1970s when we showed at the Community Church Art Gallery on Boylston Street in Copley Square. It was an activist church and during the thick of the Vietnam War I was making protest paintings. That phased out for me but Arnie is still going strong. We showed together a few times, including when we crated up our work to send to a protest show at the University of Iowa. Peter Saul, from Chicago, was one of the two other artists.

Then, under director Drew Hyde, I got to curate a show of Arnie’s work at the Institute of Contemporary Art when it was located on Soldier’s Field Road, in Brighton. That occurred when his show in one of the houses at Harvard got booted out because of its strident content. Drew was great about letting us move the show.

Back in the ‘60s the work was raw, polemical, and mordant. There was always the sense that he was doing the right work at the wrong time. His vision and style was a holdover of the Social Realists and Mexican Muralists of the 1930s and 1940s.

We all know our art history. How the Social Realists and Regionalists, the provincial painters of America, got kicked to the curb when the high art of Abstract Expressionism represented the Post War “Triumph of American Art” as Irving Sandler famously dubbed it.

When the art world undergoes such tectonic changes smart artists are supposed to get the message and line up with the new mantra. Those who do not are viewed as superannuated and swept out to sea in the slush of a tidal wave of critical taste. The trend setters and most ambitious artists try to surf and catch the next wave.

Arnie never got that. He would just shrug and argue back with a twitch of his Bolshevik mustache. Sure could be stubborn. All those decades he has stuck to his guns, the only member, of his own sleeper cell of ersatz revolutionaries. Ever ready to leap up from underground as a commissar of the new order. For a committed Marxist the only true art is devoted to the mandate of agitation and propaganda.

Even when nobody listens. The paintings have piled up. The last time I made a studio visit, and report was in January, 2006 with a posting for Maverick Arts.com. He had just finished an ambitious triptych and was urging folks to come see. Like my former Boston University professor, and fellow leftist, Pat Hills. We always talk about Arnie.

When I posted that piece on line I called and asked if he had seen it. No, was the answer. He doesn’t have a computer. But he said his daughter Maxima would take a look. So I guess he won’t read this one either. But maybe friends will tell him about it.

With a mantra of never forget, when Vientnam ended, Arnie went on to the Holocaust with its roots in the Weimar Republic and German militarism. There have been sidebars on materialism and the trickle down economics of the Republicans from Reagan to Bush.

The paintings have gotten better. While the politics never waver the execution is more surreal with keener trompe l’oeil effects, more complex fragmentation, with post cubist orderings of composition and pictorial space. I have always felt strongly that he is among the best of the Boston Painters. The problem of elusive wider recognition has been his commitment to an agenda and diversion from the main stream. His life long art practice has been to serve a personal vision. So the fame game has never seduced him from his muse. But, now and then, it is great to be included.

Which was not the case when the DeCordova museum concocted their muddled survey of Boston Painters. They made all kinds of egregious oversights. For visionary art they included Alex Grey but not the ultimately more important Paul Laffoley. In the category of political and protest art the DeCordova recognized the African American painter, Dana Chandler, Jr., but not Trachtman who is a more profound and accomplished artist.

When Arnie complained to the DeCordova they actually acquired a work for the permanent collection. He had already been shown there in a traveling show focused on the Vietnam War. Trachtman often gets curated into political shows but there is more to the work than that. It may be admired but nobody buys the stuff. For a few years he showed with Nasrudin Gallery on Newbury Street until they folded.

"Even though many in the art world snubbed Arnie's work, one institution championed it" Mark commented. "Over the years, Sinclair Hitchings, the brahmin longtime former director/curator of the Department of Prints and Drawings at the Boston Public Library seriously collected Trachtman's works. There are over 60 of Arnie's drawings, water colors and works on paper in the BPL's permanent collection. About 20 years ago, Mr. Hitchings gave him a major exhibit at the Library. Is it ironic that an establishment organization embraced Arnie's work? Probably not because the BPL was founded with the profound notion of American democracy and freedom of speech. It all somehow strangely fits."

Mark and I both love his “portraits” of musical instruments. Years ago I included “Gerry Mulligan” a study of a baritone sax into the “Jazz” show I curated for the gallery of the Boston Visual Artists Union. I commissioned Pier Gustafson to create a paper trumpet for that show. It is a simulacrum I treasure.

We urged Arnie to do more of these still life and cityscape paintings. They would surely sell. Mark suggested creating a series of all of the instruments of the BSO. What a great marketing strategy. But Arnie just shrugged and twitched his Bolshevik mustache.

Stubborn guy that Arnie. What a great artist. Surely one of Boston’s best and most neglected.  How I would have loved to have been there the other night for Chinese food with Arnie, Joan, and Maxima. Mazeltov.