Lord of the Flies at Barrington Stage to Oct. 21

Boys Will Be Boys 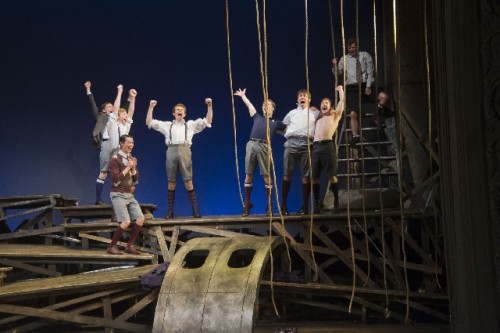 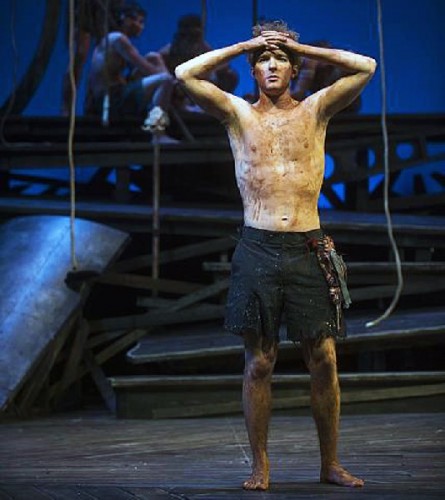 Ralph (Richard Dent), as a leader, has his hands full. 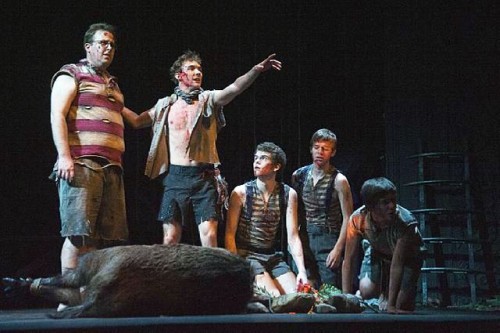 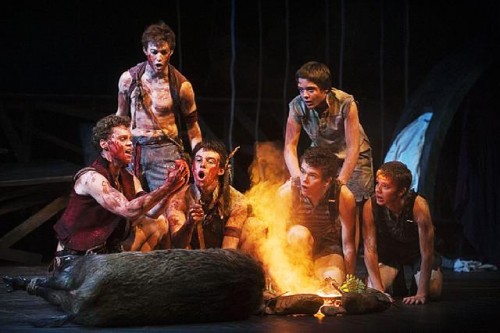 The hunters feast on meat. 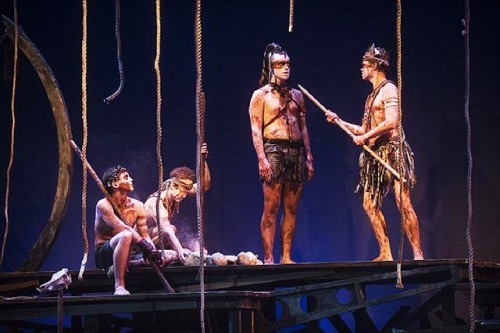 Jack (John Evans Reese) right threatens one of his gang.

During the fall season Barrington Stage Company in Pittsfield, Mass. has established a tradition of presenting a play linked to the region’s school curriculum.

Through the support of the business community, during the run of Lord of the Flies, adapted by Nigel Williams from the classic 1954 novel by Nobel Prize winner, William Golding, there will be five, 10 AM performances of the play which runs through October 21.

These special presentations will each accommodate 500 students and faculty for a total of 2,500.

During a lobby conversation with Julianne Boyd she told us that “You could hear a pin drop” during the first morning session.

Uniquely, the sanguine subject of social Darwinism involving stranded British school boys on a remote tropical island, is about, and intended for a young audience. For students it is surely uniquely involving to see their peers on stage acting out horrific and deeply disturbing circumstances that become potent talking points in the classroom.

Not the least of which is the brutal and ultimately fatal bullying of Piggy (Matthew Minor) an overweight, spectacled, nerdy kid, and one of the most finely drawn and compelling characters representing a spectrum of archetypical responses to disaster and grim survival.

It is the vulnerable Piggy who pleads for meetings, organization, and rules. His is the plaintive voice of order and reason while the group of school boys devolve from a semblance of order and common cause to blood thirsty savages.

Writing not long after WWII Golding used the metaphor of lost school boys as a means of conveying how the world went so terribly wrong resulting in the Death Camps of the Third Reich and the loss of millions of lives.

Just how is that possible?

To convey the horrendous phenomenon of man’s innate potential for murderous Fascism and abuse of authority, his tropical island and its forced inhabitants, becomes a laboratory to test theories of man’s potential for good and evil. Golding, of course, was writing in the tradition of Swift’s A Modest Proposal, Voltaire’s Candide, Carlo Collodi’s, Pinocchio, Orwell’s Animal Farm or Grimm’s Fairy Tales.

The production, which has been deftly directed by Giovanna Sardelli, realizes the full potential of the energy and enthusiasm of its cast of ten boys. They are well orchestrated to convey the shrill essence of anger, brutality, and egocentric struggle for survival. As they quickly devolved from orderly school boys, to primal carnadined savages, the energy level, movement and fight scenes (choreographed by Felix Ivanov) become excessively over the top.

As is typical with young actors and limited training there is an impulse to rise to the top of an emotional range, fighting, yelling and running amuck but far more difficult conveying the nuances of fear, anxiety, misgivings, and social transition.

In a scenario as old as Cain and Abel there is a struggle for leadership between the good boy Ralph (Richard Dent) and the bad one Jack (John Evans Reese). Ralph, backed by the ineffectual Piggy and a group of younger, weaker boys, stands for reason and order. While Jack evokes the law of the jungle and, as chief, holds tyrannical sway over the violent gang under his control.

Enforcing the sharply defined dichotomy Jack and the good boys are vegans. They camp on the beach. Using wreckage of the downed plane they create shelter from the oppressive sun and drenching rain. While Jack and his gang are carnivores living in the jungle. They decorate their faces and smear their bodies with the blood of the wild pig they slaughter.

The boys have landed on a pristine tropical island. Treated respectfully, it is more paradise than prison. They have the option of vacationers or outcasts. Golding sets it up as a natural Eden proving that only mankind, of all of Earth’s species, has the instinct of fouling its nest. He demonstrates our propensity to transform heaven into hell. Human nature proves to be our worst enemy.

Yet again we learn that fire is essential to survival. It is what separated us from beasts long ago on the evolutionary chain along which the boys are rapidly descending.

In a signifying plot point Piggy’s glasses become essential. In the process of virtually blinding him, leading to his ultimate demise, the lenses focus the rays of the sun to create fire. This provides the means to cook the slaughtered meat of the pig, warm them against the night chill, and send up the smoke that may be seen by a passing ship.

Yes, there is much food for thought in this lively production.

Barrington Stage is to be applauded for its creative educational mandate. Arguably, there could not be a better production of this rarely presented play. Indeed, youth must be served. As an adult, however, while appreciating its energy, there was a lack of the nuance necessary to stitch up this raveled sleeve of care.