Rise Up by Ariel Klein 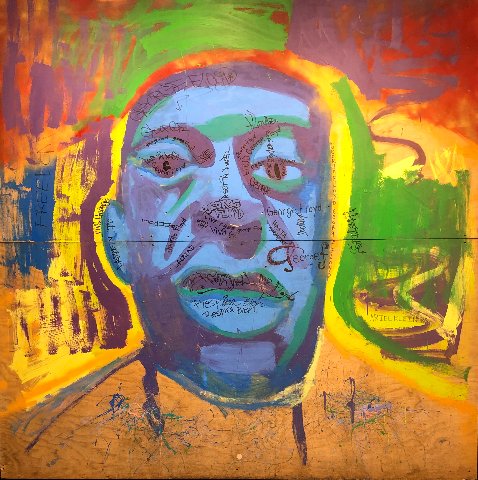 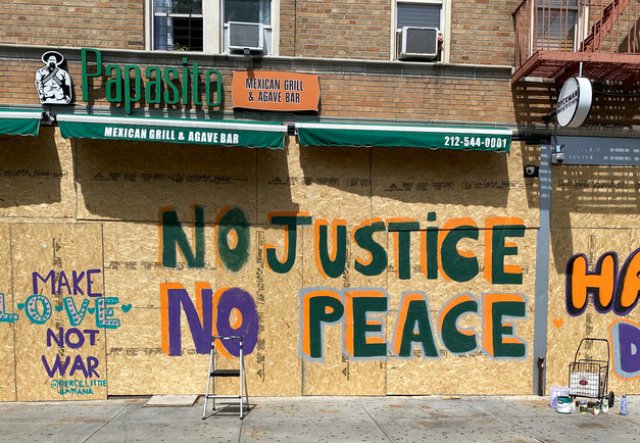 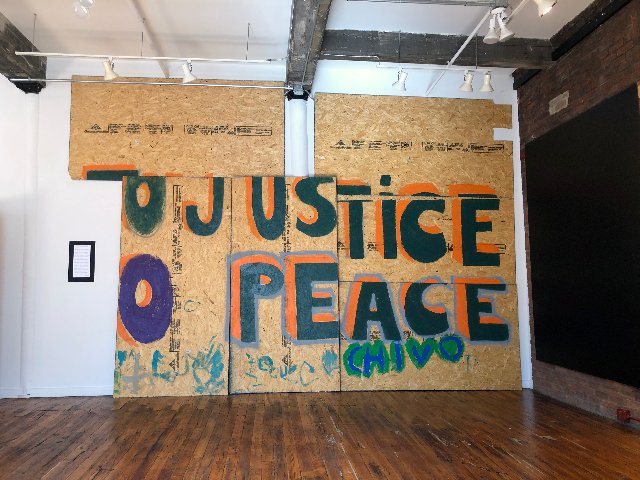 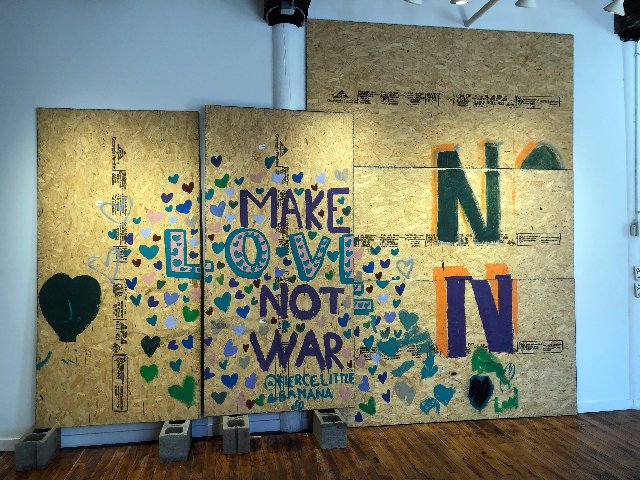 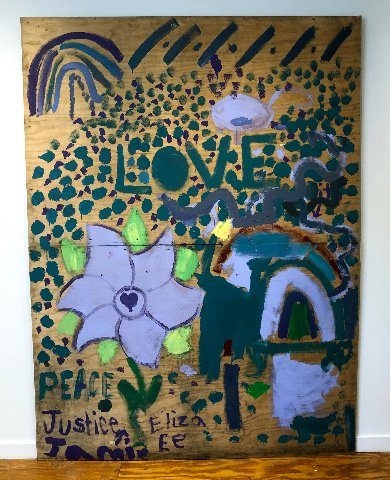 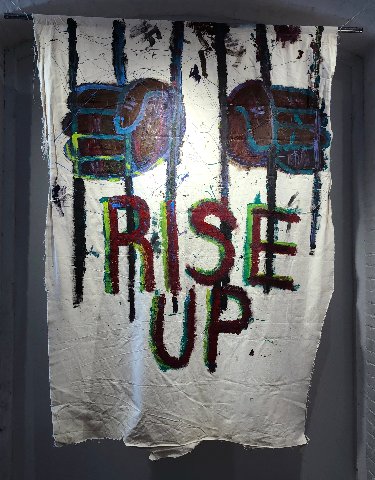 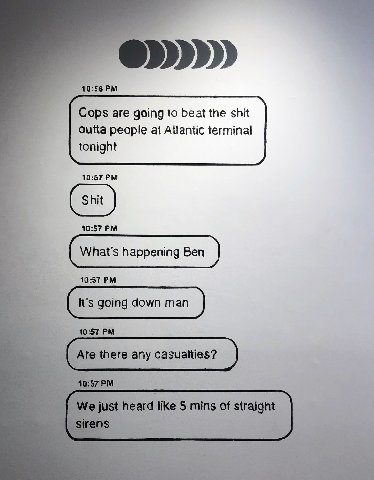 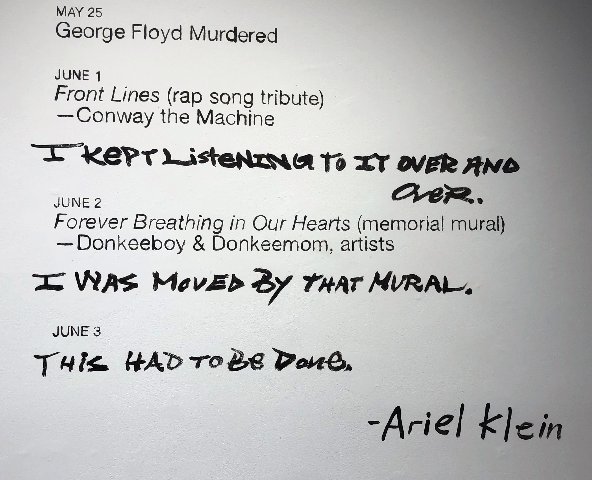 This past summer the artist, Ariel Klein, was in the thick of New York’s protests against the police inflicted murder of George Floyd. He was a New Yorker living near The Cloisters.

His take on that is on view as “Rise Up” at the Eclipse Mill Gallery in North Adams.

While the protests were primarily non violent there were instigators who engaged in violent clashes, vandalism, and looting.

Small business owners boarded the display windows of their storefronts. This was executed with large sheets of plywood or fiberboard. That contributed to the sense of blight in the hood.

These surfaces became supports for graffiti, Klein's paintings, and social justice slogans. This form of grass roots, urban, spontaneous semiotics is normally not thought of as a form of artistic expression. That is not the intent of justifiable outrage.

Recently Klein purchased a studio in the Eclipse Mill an artists’ loft complex in North Adams. He brought with him some of the emblazoned walls.

The anonymous or "tagged" street art is now combined with Klein's paintings and poems that are installed in the Eclipse Mill Gallery. The exhibition has been curated by another recent Mill resident, Laurie Miles.

The installation is on view to Mill residents and visitors by appointment.

There is a long and complex debate regarding the relationship between fine arts and propaganda. How does one approach viewing and evaluating an exhibition of urban art and graffiti that falls out of the margins of critical discourse?

To what extent does the social justice intentionality render moot the analytical process of form, technique, and skills of execution? How then to evaluate work within an alternative mode of criteria?

It becomes more complex when, as is the case of Klein, the practitioner is a graduate of an art school with the training that it entails.

In “Rise Up” the work he has created in the studio is interspersed with the appropriated found objects of salvaged storefront boards. Viewing the exhibition, we are encouraged to blur the edges and accept confluently work consciously executed in the studio, and passionate, outsider urban expressions of outrage at systemic racism.

That is the edge that Klein informs his work with. There is also minimalist text messaging rendered directly onto walls as poetry.

A large portrait head of Floyd is rendered with loose, high chroma, slashing brush strokes in a neo expressionist manner. There are thin lines of text inscribed over the image. The alla prima pigment is scumbled and scrubbed into the unprimed plywood support which is left exposed particularly around the edges. The artist is not striving for the look of a finished painting.

The debate of art and propaganda started with the Russian Revolution. In Marxist theory the fine arts, and art in general, were mandated to serve the need of agitation and propaganda. In art speak this is referred to as agit prop.

Its sanctioned intentionality was agitating the masses to issues of social justice through works of art crafted to serve the function of propaganda.

Since the October Revolution of 1917 there have been many movements of protest art as the world has endured countless wars, genocides, and violent acts of social injustice.

In the wake of Black Lives Matter, and too many black citizens murdered by cops, the groundswell of protest is all too palpable.

Here in the bucolic Berkshires it is too easy to feel safe and distant from systemic racism and issues of social justice. We wear masks and practice social distancing. In general, we have not been identified as a hot zone for Covid. Yet we know that Covid, systemic racism, police murders, and threats from a deranged government rage all around us.

Most of us do little or nothing about it. We send e mails and chat with friends by phone.

Ariel Klein has been in the belly of the beast. With raw power and urgency his exhibition exposes us to mordant, roiling rage. That has resulted in a riveting exhibition for which the message supersedes the medium.

What follows is the press release for the exhibition

NORTH ADAMS, MASS. — For the first time since a series of protests hit New York City in the wake of the George Floyd police killing, paintings that covered boarded-up storefronts in Upper Manhattan amid the uprisings will be on display in a gallery setting.

The murals, painted by artist Ariel Klein and other locals from the Inwood section of Manhattan, will be shown at the “RISE UP” exhibition at the Eclipse Mill Artist Lofts from Oct. 7 - Nov. 11.

The paintings include depictions of Floyd, the 46-year-old black man slain by Minneapolis police officers in May, as well as a number of slogans and other images that capture the spirit of New York amid the uprisings.

Most of the murals appear on plywood panels that were erected on Inwood storefronts to thwart potential looters as the social unrest gripped the city for several days this summer.

For Klein, the show is a visual representation of his reaction to recent outbursts of police brutality and the uprisings that followed in the streets.

“This work is heavily influenced by slogans I read at protests and the George Floyd memorial painting in Houston,” Klein said in a statement.

“I see this work not only as art, more so, it is a gut reaction driven by a sense of urgency to respond to the slaughter of George Floyd,” he added. “The George Floyd protests in NY and elsewhere were silenced by a curfew set in place. This show aims to confront police brutality head on and fight against racism.”

Klein, a resident of the Eclipse Mill Artist Lofts, is an accomplished visual artist and graduate of the Maryland Institute College of Art of Baltimore.

Rise Up is curated by Laurie Miles. The exhibition is open by appointment only.