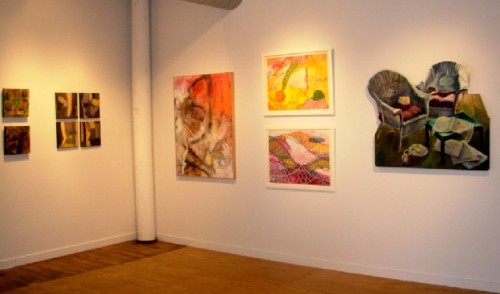 A view of the installation of the Eclipse Annual Exhibition. 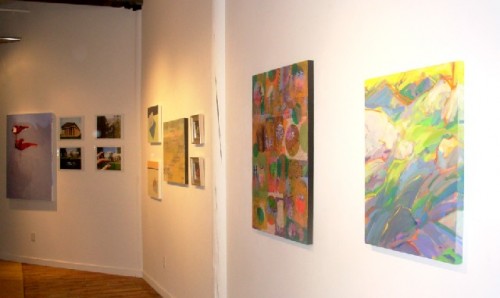 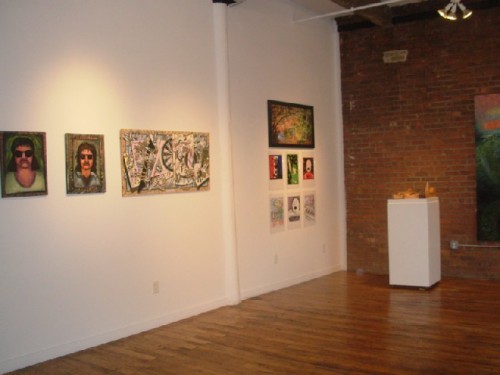 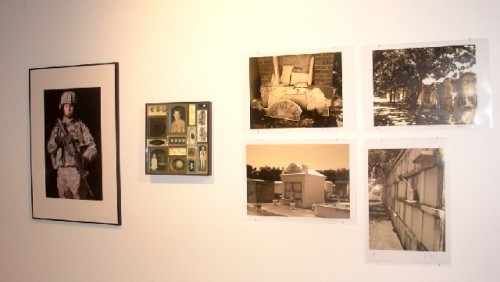 A group of works, left to right, by Barry Goldstein, Lsa Nilsson and Astrid Hiemer. 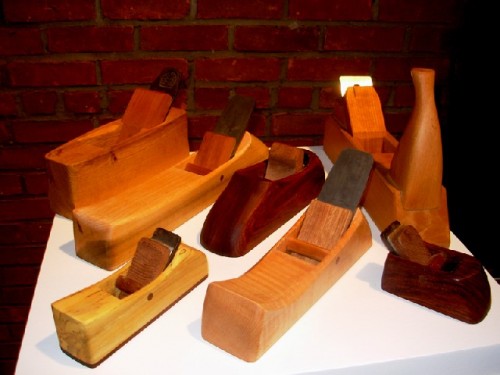 A group of hand crafted planes by George Aitken. 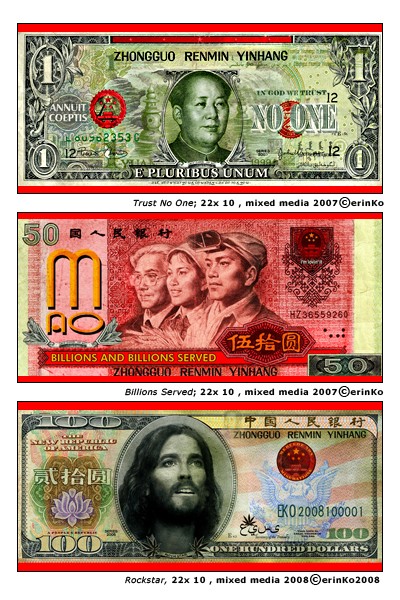 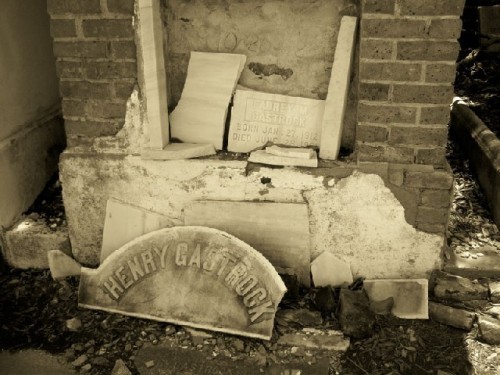 A view of the Lafayette Cemetery in New Orleans by Astrid Hiemer. 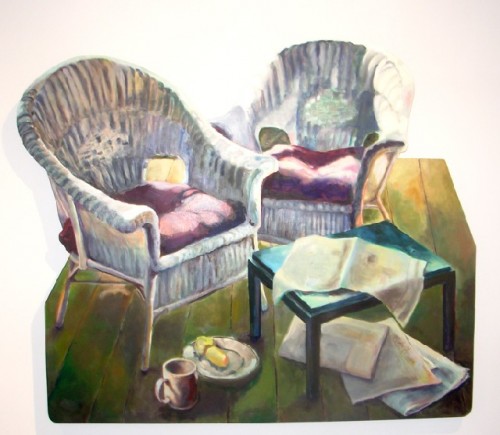 A shaped canvas by Susan Graber. 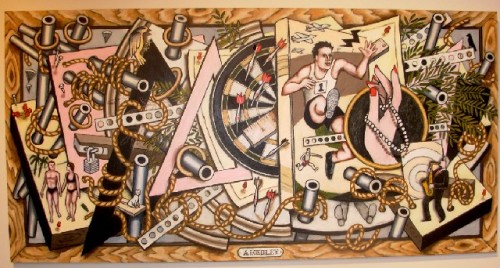 The paintings of Norman Thomas combine Cubism and Pop. 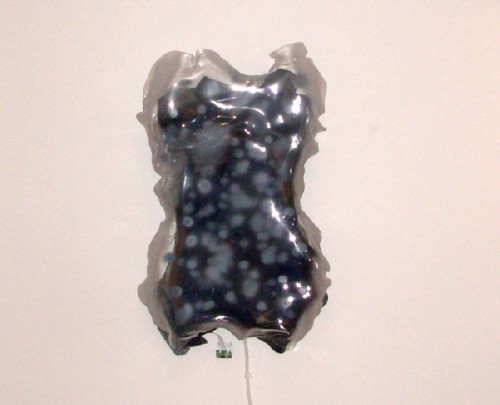 Sound is emitted as a viewer approaches this work by Marjorie Minkin. 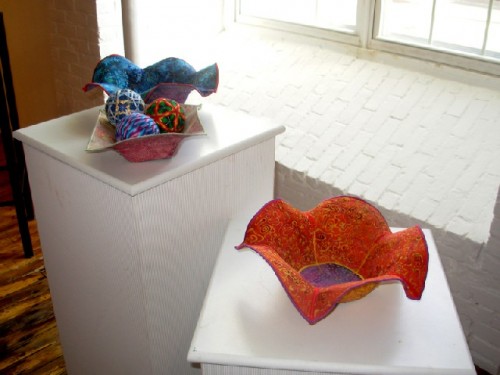 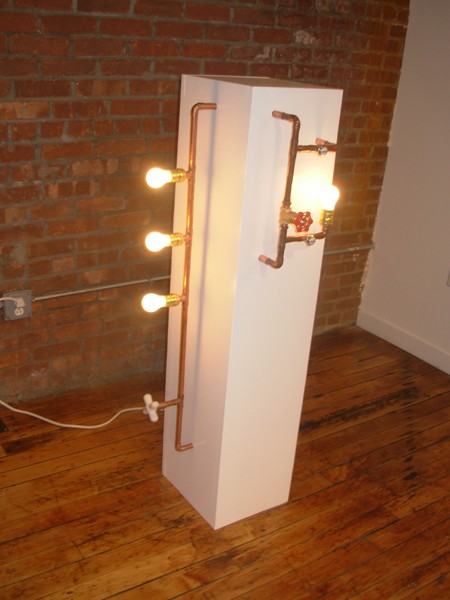 This light sculpture by Julie Seitel evolved from a theatre project for Williams College. 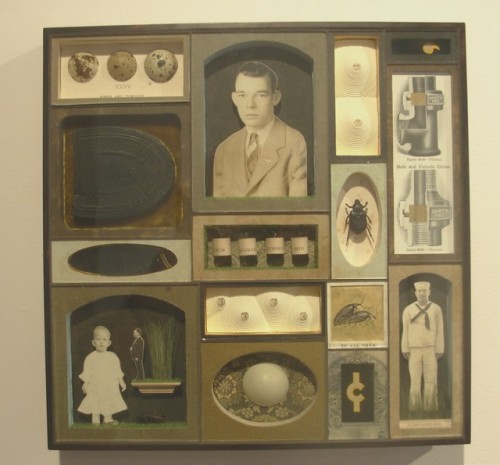 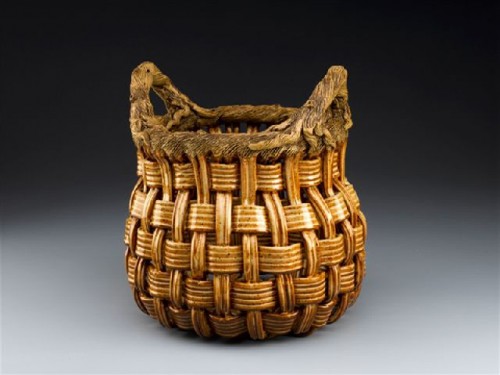 An onion basket by Gail and Phil Sellers. 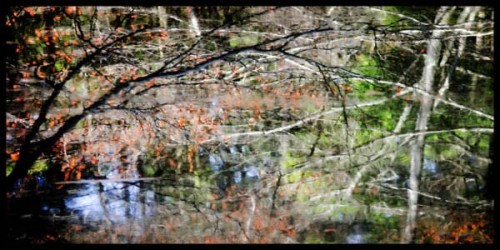 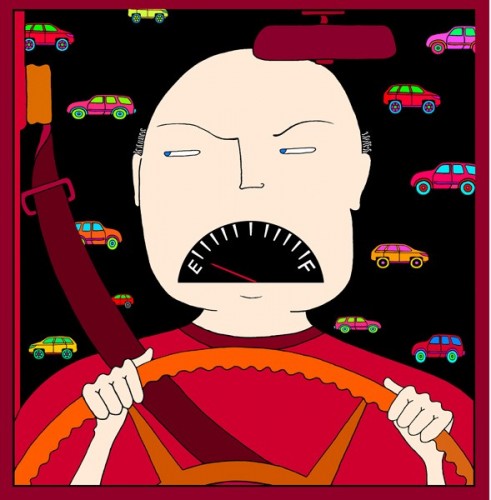 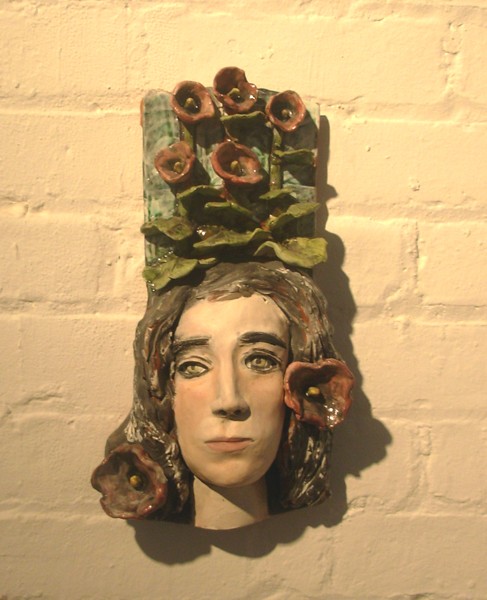 A ceramic sculpture by Diane Sullivan. 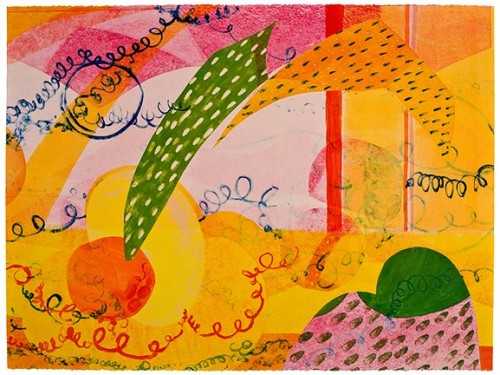 Tropicale a print by Sandra Butler. 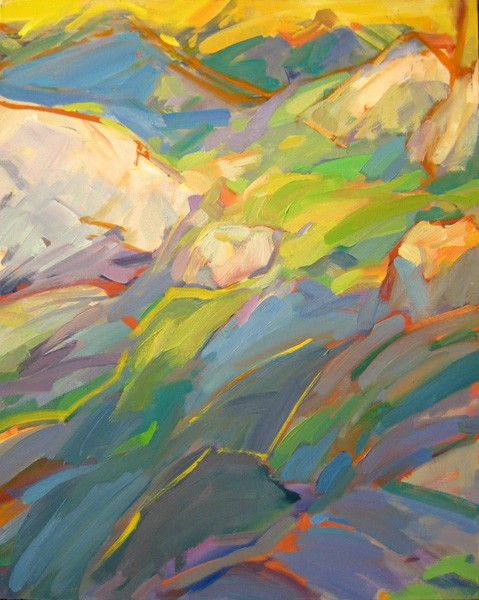 A study from nature Flowing Light by Sharon Carson. 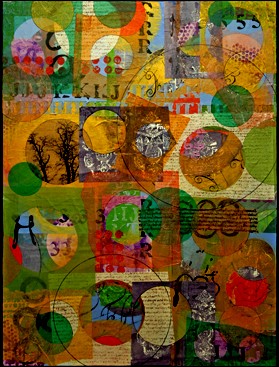 The mixed media Because of 72 by Debi Pendell. 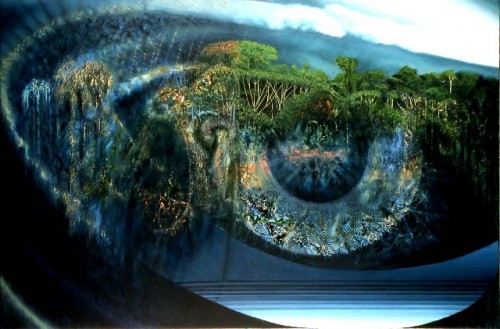 The Colombian rain forrest inspired this painting by Rick Harlow.

The Eclipse Mill Gallery, 243 Union Street in North Adams, will present the Eclipse Mill Annual Exhibition from October 10 through November 16. There will be a reception in the gallery on Friday, October 10, from 6 to 8 PM.

The 12th of October weekend draws many visitors and leaf peepers to the Berkshires. There are many activities planned for the busy Holiday weekend. Adding to the festivities is the opening of an exhibition that provides an in depth overview of the work of residents of the unique community of the Eclipse Mill.

Some 27 artists are participating in this much anticipated annual event. The work includes many forms and styles of painting, print making, craft, and photography. This exhibition, opening on the Columbus Day weekend, also provides a capsule and preview of the annual Open Studios that occur on the following weekend from October 17 through 19. A number of the artists in the Annual will participate in Open Studios. There will be wall labels, handouts, and signage assisting visitors during Open Studios to find participating artist lofts. The walls of the corridors of the artist loft building also include numerous examples of works by the residents. The four floors of the Eclipse Mill include 40 live/ work studio spaces.

There will be expanded hours during Open Studios coordinated with other venues in North Adams.. Several Eclipse artists will simultaneously exhibit their work at the North Adams Cooperative Gallery on Main Street which is a part of the season long Downstreet project which runs through the end of October. Organized by MCLA, and its Gallery 51, Downstreet entails in addition to the Coop, two other temporary galleries. One displays a monumental installation of toys on a Mayan pyramid by Jarvis Rockwell and the other exhibits work by interns involved with the recently completed project to create designs by Sol Lewitt for Mass MoCA. These galleries, and Gallery 51, which is currently showing MCLA faculty artists, will also participate in Open Studios. Work will also be on view at the Beaver Mill and in a special installation in the enormous former mushroom factory across the street from the Eclipse Mill. A map including all of the North Adams based arts venues was produced by MCLA as a part of the Downstreet project.

George Aitken Is a fine arts cabinet maker. He is displaying hand crafted planes used in his studio.

Sandra Butler Uses woodcuts, stencils, transparent oil-based inks and a printing press to create multi-layered abstract monotypes based on the concept of a universal creative energetic "flow".  She quotes painter/printmaker Wayne Thiebaud to describe her process; "Making a print is an orchestration between what you think you know and what you're surprised to learn."

Ed Carson Creates landscapes and still life paintings in the high chroma, inventive color schemes of a Fauve approach. He is represented by Harrison Gallery in Williamstown.

Sharon Carson My main enjoyment as an artist is in the personal interpretation of the colors, rhythms and shapes found in nature.  My oil paintings are based on the Berkshire landscape, but what I'm really interested in is pattern, connections, contrast, expressive line, color impact, pace, and variety. I begin by sketching outdoors, gathering ideas about the subject and using nature as reference.  Later, in my studio, I work from my sketches, but allow personal creativity to overtake realism. By creating new color harmonies, simplifying and exaggerating, I discover a creative interpretation of my subject.

Beth Davis Makes a variety of objects involving aspects of textile, quilting, and stitching. She is exhibiting vessels and balls.

Barry Goldstein Has made two trips to Iraq in a project that originated with photographing troops in training in the U.S. This is evolving into a book of text and photographs. Here he exhibits an image of a very young, attractive woman in full combat gear.

Susan Graber Paints portraits, landscapes and still life images with a bravura style. She is showing a uniquely shaped canvas depicting an arrangement of chairs and objects.

Bill Guild  Is a photographer working in the digital format.  His images are often printed on a varying array of surfaces.  "Autumn Reflections" is an image conveying color and motion, printed on Japanese Kozo paper.  "This provides a depth to the print that otherwise wouldn't be available on traditional inkjet paper. To me, the journey is the final destination".

Astrid Hiemer Has created a series of images of Lafayette the oldest cemetery in New Orleans in its Garden District. The black and white digital prints are evocative of time, loss, and memory.

Joan Kiley Combines text and images derived from popular culture in a witty and ironic manner. She is exhibiting two small portraits.

David Lane Almost always works directly from life, and is concerned with creating work with atmosphere that evokes a mood, depicts a visual impression, or captures a fleeting moment in time. His studies of classical technique has helped him to develop a naturalistic style that has become a signature element of his small still life paintings.

Cynthia Lewis Works with abstract fields of color in hand made paper and patterns derived through weaving.

Marjorie Minkin The multi media work in this exhibition combines abstracted forms with sound triggered as a visitor approaches the object.

Lisa Nilsson I make monumentally small assemblages composed of hundreds of found and made objects, placed in niches carved into a plywood support, then sealed under glass. Mixing the humble and the high, my pieces are reliquaries of the remains of many different lives.

Debi Pendell  Has her studio in the Eclipse Mill in North Adams. Her mixed media collage work is a dialogue between the accidental and the intentional, chance juxtapositions and planned elements; the unconscious and the conscious. Materials and process are the focus; the finished work is a physical record of search and discovery. www.debipendell.com

Rich Remsberg Is a photo and film archivist who used found objects and ready mades in his work which comments on aspects of the American experience. For this show he is presenting a video piece combining found footage and sound.

Robert Rendo Is a political cartoonist and illustrator whose work has been published by numerous newspapers and magazines.

Julie Seitel Works as a light designer. The fixtures embedded into a plinth using copper plumbing, fixtures and bare bulbs in this exhibition evolved from a recent theatre project at Williams College..

Gail and Phil Sellers At River Hill Pottery we have combined our creativity and experience to bring to you some of the most beautiful baskets in clay. By designing our own extrusion dies and molds we have been able to create these unique baskets that we are known for.  Each piece is handmade with care and craftsmanship for you to enjoy. It is our desire for you to have a piece of pottery that will give you a lifetime of joy. Our door is open to the public so come, see and experience the making of a basket in Loft 104 of the Eclipse
Mill

Diane Sullivan Is a ceramic sculptor who creates witty figurative sculptures as well as glazed ceramic tiles. For this show she is presenting as small head of a woman wearing an arrangement of flowers.