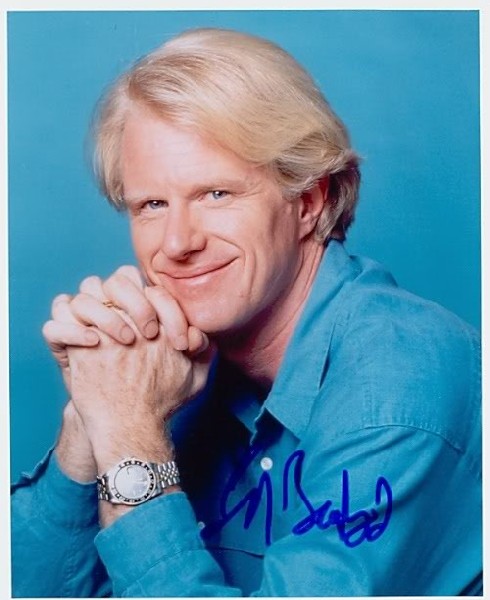 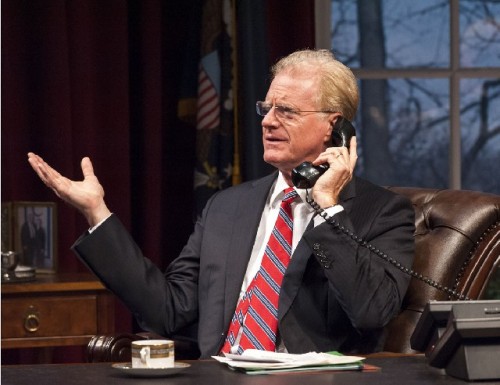 The President works the phone. 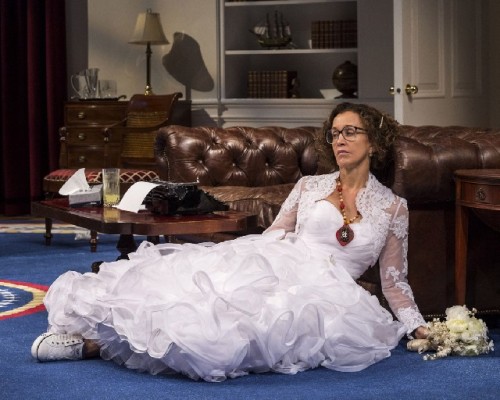 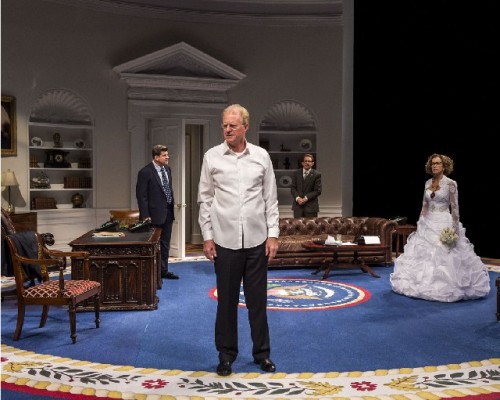 Chaos in the Oval Office.

“Mametspeak” is once more very much alive and well on the stage of the Mark Taper Forum in Los Angeles.  This time it’s a political satire that fuels the razor sharp wit, biting dialogue, and the outrageous viewpoint of Chicago’s Pulitzer prize-winning playwright/author David Mamet.

In “November”, Mamet delivers his hilarious, over-the-top commentary on fictitious American President Charles Smith, as he and his staff prepare for his reelection campaign.  The one that no one wants to even think about, let alone work on.   It seems that Smith is not very well liked in the country – by the voters, by the media, or by his Party.  The timing of the production is a little uncanny as well.  You don’t think it’s somehow connected with the upcoming election in November do you?  Naaah, I didn’t think so.

Regardless of motivation, the Mark Taper Forum comedy production winningly directed by Scott Zigler, a long time helmsman of many Mamet plays, is right at home with a cast of “fellow Mamet travelers”.  They include Felicity Huffman as presidential speechwriter Clarice Bernstein, Todd Weeks as a Representative of the National Association of Turkey and Turkey By-Products Manufacturers, and Ed Begley Jr. as President Charles Smith; along with new Mamet performers Rod McLachlan as Archer Brown, Smith’s Chief of Staff, and Gregory Cruz as Dwight Grackle, part Indian Shaman and part hustler/businessman.

“November” is a rip-roaring topical piece from Mamet in that it takes situations right from today’s headlines and election campaign shenanigans and lends a ring of authenticity to the storyline.  Not exactly, mind you, but politics and politicians being what they are, the audience just laps up the sheer outlandish behavior of the characters on stage.

He has the look and the slickness that reminded me of Lyndon Johnson in overdrive in his early days in Texas, before he became the President in 1963.  Begley’s take on President Smith is: although you know you can’t trust him, he still has this odd appeal –  that leads the audience to believe that maybe, just maybe, he might get reelected screwball personality and all.  Begley, as an actor, is an absolute delight to watch, and what a performance!

Not to be overshadowed in this 90 minute, pedal-to-the-metal, comedy is Felicity Huffman (of TV’s “Desperate Housewive’s” fame) in a neat understated performance as speechwriter Bernstein.   Not only is Bernstein suffering from a recently acquired cold accompanied by sneezing and many used Kleenexes, but she also wants the President to change the law prohibiting same-sex marriage so she can marry her partner at the White House.  Todd Weeks is spot-on as a determined lobbyist for the turkey industry, who simply will not take no for an answer when it comes to the traditional Presidential “pardoning” of the nation’s official Thanksgiving Turkey.

Rod McLachlan’s deadpan Chief of Staff Archer Brown, reminds one of H.R. Halderman in the Nixon White House, but without the off-putting imperiousness of Halderman. McLachlan,’s Brown has a certain amount of likeability, and as such, enjoys the confidence of his President, but he’s not above leveling with his boss or anyone else when it comes to telling it like it is.  Gregory Cruz as Dwight Grackle, brings just the right amount lunacy to these wacky proceedings as a businessman with a proposition for his President.  “November” easily reminds one of  those zany old Marx Brothers movies.

Farce can be quite tricky if it’s not done properly.  Thanks to the unseen hand of director Zigler, pacing concerns and such, are non-issues with this production.  Zigler’s creative team is also on his wavelength when it comes to the technical credits.  Takeshi Kata’s scenic design of the Oval Office is pitch perfect, along with the lighting design by Josh Epstein, which allows us to see and appreciate the costumes by Laura Bauer.

“November” runs at The Mark Taper Forum through November 4, 2012.  It’s one hilarious hoot.  Don’t miss it.