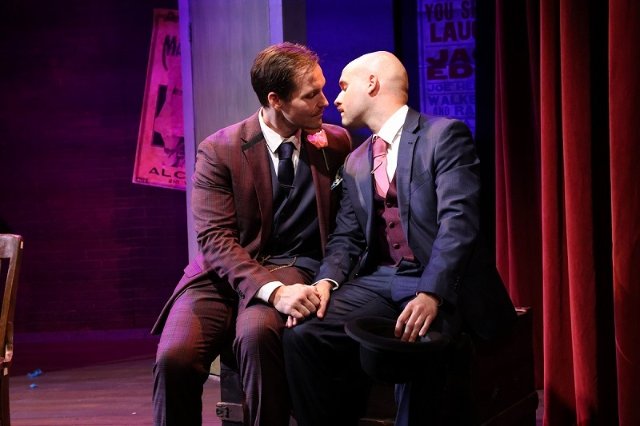 Without a doubt, Jacobson believes that we can handle the truth of what happened in 1914 Long Beach, Calif. He just tells the tale in a different way. Specifically, Jacobson has taken a Pirandellian-like approach to tell this story. It is an approach in which actors become inseparable and indistinct from their characters. The result is an intriguing, fast-paced, informative, fun, and funny piece that also makes us think.

Two talented actors, Clay Cartland and Alfonso Vieites, each credibly and energetically take on numerous characters in this 90-minute, intermissionless theatrical treat. What is particularly impressive is the fact that Jacobson has fun with this piece without making light of what happened in Long Beach in 1914. For that matter, neither does the cast, which director Michael Leeds deftly guides, make light of the events.

In 1914, two out-of-work actors, who may or may not be gay, hired themselves out to the Long Beach Police Department. Their goal was to entrap “social vagrants” (homosexuals) in public restrooms. As a result, authorities arrested 31 men. And the ensuing scandal, among other things, led to an ordinance against “oral sodomy” in California.

Clearly, Jacobson, a playwright known for tackling challenging themes and relating history in surprising ways, was not interested in writing a traditional, chronological account. Instead, his creative play-within-a-play approach places two fictional actors on a fictional, 20th-century stage. Scenic designer Ardean Landhuis has designed it with period details.

At the top of the show, the two fictional actors, Warren and Brown, are waiting to audition for a movie that we learn almost nothing about. As they wait their turn, Warren proposes that they brush up on their improvisational skills. In fact, at one point, Warren suggests that the “better actor wins the right to stay and audition.” Eventually, Warren suggests that the pair, through improvisation, act out the story of the two actors who hired themselves out to Long Beach police. And so, armed with a rack of costumes and a prop box, the pair transform into the many characters who played a part in the little-known 1914 historical event in California.

Much of the fun that this play and production offers stems from Cartland’s and Vieites’ impressive ability to seamlessly slip in and out of different characters’ skin. From a flamboyant German to a charming southerner, a pious Orthodox Jew to a cigar-smoking, scratchy-voiced journalist, Cartland and Vieites prove to be chameleonic performers. With the addition of a hat, change in posture, or vocal inflection, for instance, they become another character. Attention must be paid these two.

Credit, as well, the work of the behind-the-scenes folks. For instance, Landhuis, who designed the set and lighting, uses degrees of intensity to differentiate scenes that take place in public from those that are clandestine. Also, costume designer W. Emil White uses period-revealing details to set us in the 20th century, while also revealing truths about the characters. For instance, Warren (a dramatic, versatile Cartland) is the flashier of the characters. Perhaps as a result, he wears a patterned jacket. Meanwhile, Brown (a wide-eyed, wary Vieites) is the more understated of the two. His jacket does not contain patterns.

Through Jacobson’s snappy, humorous dialogue, the play explores, without offering easy answers or solutions, themes and topics such as sexual identity, institutional corruption, deception, the pros and cons of being “true to thyself,” and the very nature of acting.  Indeed, as I watched the play, that famous speech from Shakespeare’s As You Like It came to mind. You know, the one that begins with, “All the World’s a Stage, and all the men and women merely players.”

One could view The Twentieth Century Way as a celebration of live theater and acting. But, it’s also a cautionary tale from our past. To claim that this play is a museum piece because of the number of strides society has made in the area of gay rights is to be naïve. While society has certainly progressed in championing – and implementing—gay rights, society has also regressed. Look no further than the number of hate groups that exist openly and in secret to undo years of progress made in treating people equally and fairly. Then you hear about politicians using anti-gay slurs in the year 2021, and you wonder what else could possibly happen.

Island City Stage debuted in 2012 with The Twentieth Century Way. The production took place in the tiny Empire Stage playing space, with Cartland and Mike Westrich performing and Leeds directing. Since that inaugural production, the company, which has grown steadily, moved to its own space in Wilton Manors. Some of its productions have won Carbonell nominations and awards, honors which recognize excellence in South Florida theater. The company’s mission is to create quality professional theatrical experiences focused on the LGBT+ community for a universal audience.

The Twentieth Century Way continues through Oct. 31 at Island City Stage, 2304 N. Dixie Highway in Wilton Manors. Showtimes are at 8 p.m. Thursday through Saturday, as well as 5 p.m. Sunday. Tickets are $35 plus a processing fee. The company is requiring that patrons wear masks while inside the auditorium. Also, those purchasing tickets must answer a mandatory online health questionnaire. For more information, call (954) 928-9800 or go to www.islandcitystage.org.