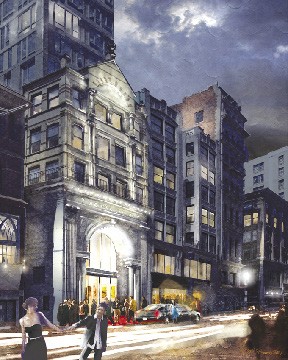 Suffolk University is poised to open the Modern Theatre, which brings a brand-new performance space to the Washington Street Theater District while restoring an important facet of Boston theatrical history.

The grand facade of the historic theater, Boston’s first designed specifically for showing movies, has been painstakingly restored, stone by stone, and reconstructed as part of the Modern Theatre and residence hall development.

Inside, an intimate jewel-box theater showcases central design elements that are a modernization of some of the most distinctive historic features of the 1914 theater.  The state-of-the-art, 185-seat venue will be ideal for live performances, conversations, readings and film screenings, and will promote excellence and innovation through all of its programming.

The University will welcome the general public to the new Modern Theatre during a Friday, Nov. 5, 2010 community open house, part of a two-day grand opening that begins with a ribbon-cutting ceremony on Thursday, Nov. 4, for invited guests.  Mayor Thomas M. Menino, who has supported the University’s preservation efforts and whose vision for the revitalization of Boston’s Theater District has become a reality, will be the guest speaker.

“We are proud to play a part in the revitalization of the Theater District and Downtown Crossing,” said Suffolk University President David J. Sargent.  “Not only does the University now have a more visible showcase for its Theatre Department and public programming, but our students will be even more connected to the vibrant cultural life of the city.”

While the “front of the house” is dedicated to the arts, the building also provides housing for nearly 200 students in a 10-story residence hall built in a setback above the theater and accessed through another University residence hall at 10 West St.

With the addition of the new student rooms, the University meets a Master Plan goal of creating more student housing on campus while providing a larger audience for the renewed theater district and other downtown Boston businesses.

“We have taken an important step toward our goal of housing more students in University residence halls,” said John Nucci, vice president for External Affairs. “This is good for the city, which wants to preserve neighborhood housing for city residents and revitalize the downtown area, and it’s good for the students, because they have a safe and convenient place to live and study.”

The new building also continues the University’s efforts to create a sustainable campus environment. It is certified LEED -- Leadership in Energy and Environmental Design -- Silver, a designation resulting from green design across all phases of planning, construction and operation.

The Modern Theatre was included on the National Register of Historic Places in 1979 as part of the Washington Street Theater District. In 1995 it was designated a Boston Landmark.

The building initially was constructed as retail and warehouse space in 1876, four years after the Great Boston fire destroyed the area.  In 1913, it was converted into the Modern, the first Boston theater designed specifically to show films.

Under the direction of owner Jacob Lourie, the Modern Theatre became the one to watch in Boston.  He was the first to introduce films with sound and premiered The Jazz Singer in Boston.  When nearby vaudeville theaters began adding movies to their lineups, he came up with the concept of the double feature – two movies for the price of one – a concept that soon swept the nation.

But by the 1980s, the building fell out of use and was considered beyond repair.  Then Mayor Menino and Suffolk University stepped in to save the facade and ensure that there would still be a theater on the site.

The CBT architectural firm designed the new jewel-box theater and residence hall in harmony with the restored Modern Theatre facade, which was rebuilt in the exact spot where it previously stood.

The interior of the theater also draws on the original. Tony-award-winning theater scene painter and designer John Lee Beatty created a mural design for the stage house walls, inspired by colors and themes from the earlier theater.

Meanwhile, the first exhibit in the lobby gallery will feature artifacts from the original movie house, vintage photographs of the building, and images of the movie posters and Hollywood stars once featured there.

Modern performances will include a reading by F. Murray Abraham of The Last Will and the Actors’ Shakespeare Project’s production of Antony and Cleopatra, featuring Paula Plum.