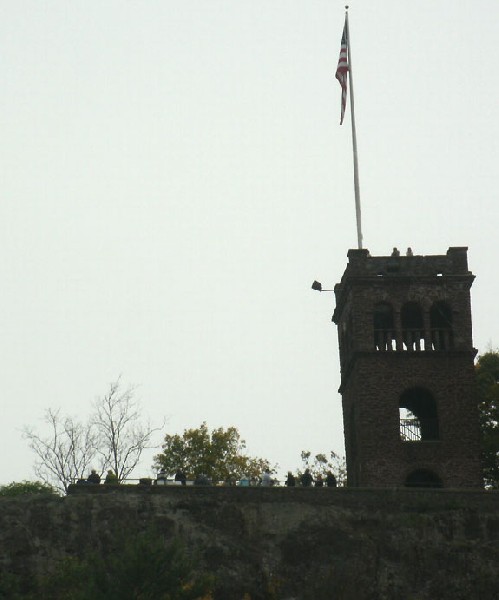 From the Poet's Seat on high, they do gaze down... 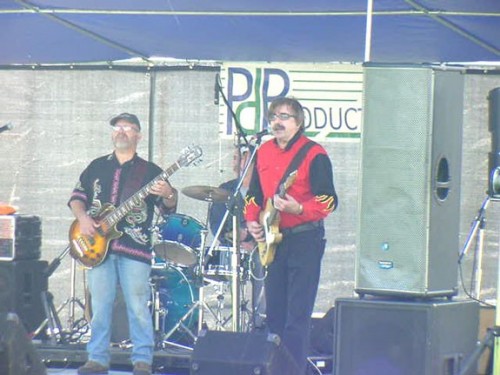 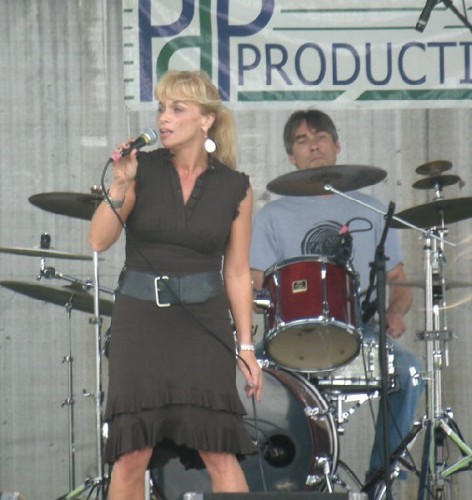 Agona Hardison - Her new CD is The Drive 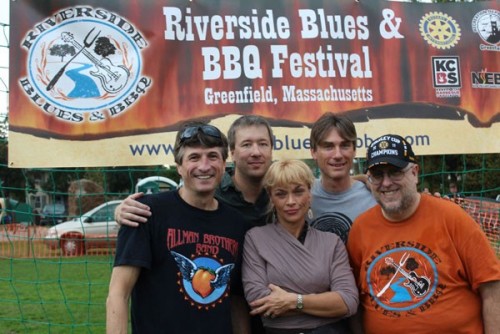 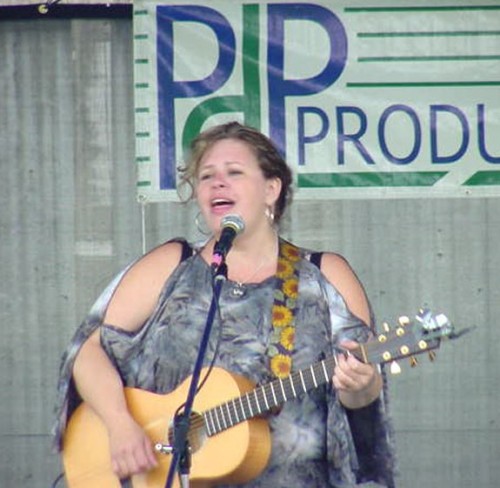 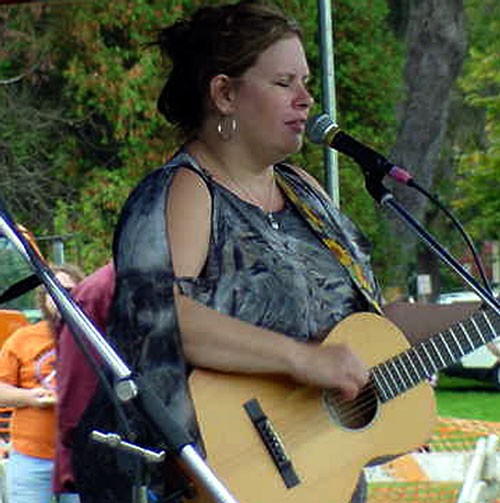 and Susie singing it hard 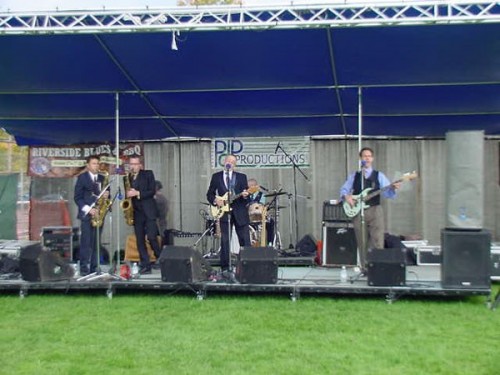 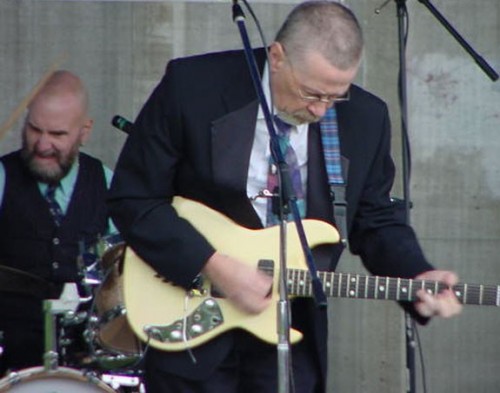 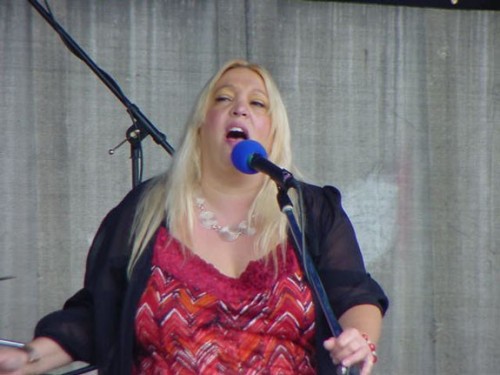 Susan Angeletti - We all need a Red Hot Mama to warm us up on a nippy grey morning. 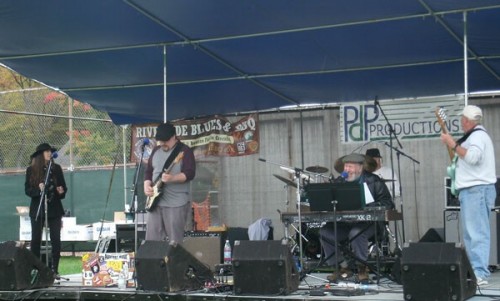 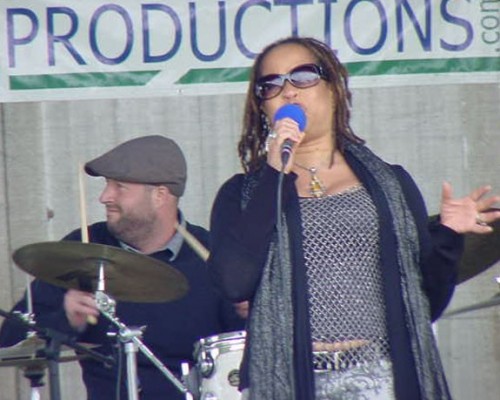 Samirah Evans - Some days its Beer and BBQ... 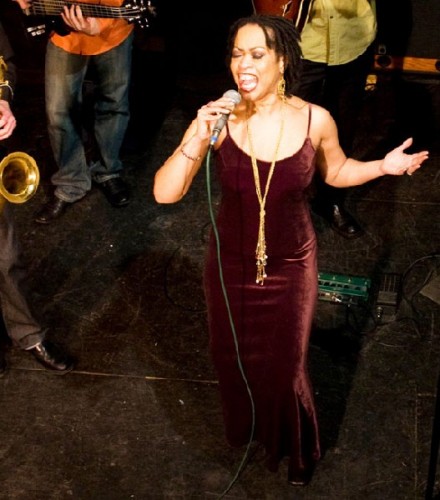 and some days it is Champagne and Caviar.

Shuttling to the park, early on Saturday, we arrived to find Greenfield's second annual Riverside Blues & Barbecue Festival off to a slow start attendance wise, but the music was already heating things up. The park is in many ways idyllic, surrounded by local residences on three sides, the fourth is dominated by Rocky Mountain and topped with the Poet’s Seat Tower, a renowned landmark.

Without a doubt this has to be one of the hardest gigs any musician or group of musicians has to play. Consider that these performers constantly play to crowds of lust driven, mate seeking, over-imbibing audiences with a lot more on their mind than listening to music. In a club venue they can focus and draw in individual by individual, table by table until they have built a cohesive audience responding to their offerings. Not so in the wide open athletic field where this event is held with attendees constantly in motion exploring the food booths, the crafts vendors, the beer sampling and attention is being given to the BBQ competition which constitutes the reason many folks are there.

It pleases me to report that none of the acts at this festival gave less than a full effort and there was plenty of good music for anyone who took even a moment to listen.

Though the audience was sparse, kicking off the show at 9am on Saturday, Hilltown based regional wonder, Wildcat O’Halloran woke us all up with an one hour set. Minus the usual distaff members, and strangely, or maybe not so strangely given the BBQ smoke floating over the venue, they offered up more of what I thought, though I cannot tell you why, was a Kansas City Blues sound.

Rocker, Agona Hardison, gave a blues edged performance of the latest numbers on her recently released CD, The Drive and from past releases as well. Agona commanded the stage and delivered clearly articulated lyrics with real passion. At times she seemed to physically vibrate as her vocals welled up from within her bursting into the brisk morning air. It was the best performance yet I have heard from her and much credit is due her local band which provides her vocal stylings with steady support without ever getting in the way.

Without a doubt, the solidest hard-core blues performance of the day came from Susie Vinnick. With no accompaniment other than her own guitar Susie held the attention of a growing audience with 90 plus minutes of material, many of which she penned herself. Two of them, "The Honey I Want" and "Sometimes I Think I Can Fly" won her International Songwriting Awards in the category of Blues. She has won Canada’s Maple Bues Award so many times they might as well just hand it over in advance. This was the first time I heard her in live performance and her voice flowed like warm honey, intimate, bittersweet, hopeful, containing all the innuendoes that we expect of the Blues. Not even a fifteen minute downpour in the middle of her set drove many for cover.

Saturday’s performances were brought to a close by Trailer Park. With two sax players, they brought a hipper, jazzier approach to the blues that was a great change of pace. It was a refreshing laid back aspect of the multifaceted blues genre. Having backed Bo Diddley upon occasion, having opened for acts as diverse as NRBQ, Little Feat and Los Lobos, now returning to perform after a five year hiatus, I really hope we get to see and hear more of them.

I have nothing but admiration for red hot mama, Susan Angeletti as she drew the less than enviable task of waking us up and making us wonder why we were sitting in the cold under dense clouds early on a Sunday morning. She got our hearts pumping, warmed us up and made it worth our while.

Billy G and The Blue Zone followed with a serving of electric funk, some r&b and a few nicely framed Chicago blues numbers. A tasteful band, they play with practiced technique and harpwise, a bit of a Billy Boy Arnold influence. They exercise great respect for their source material. I’d like to hear more from Cathy Garcia as well who I thought was a little under miked or underused.

Wrapping up the performances, headliner Samirah Evans and Her Handsome Devils brought it home. I do want to go on record here and say that while they do play up a storm and back her as handsomely as she deserves, I didn’t think that a one of them was all that handsome. Course, some of the ladies may think different, but I’m just sayin’… Samirah and those allegedly handsome devils do excel at communicating the heat, the passion, the hot, sticky, humid, sweaty, swampy, gator infested, mangrove rootedness of New Orlean’s bayous and its blues. They were and are, great fun.

It was a superb finish to a fine weekend that gave us sampling of many of the different flavors of blues that have evolved over the last fifty years.

I look forward to next year, but until then, check out some of these videos of the above artists.

Wildcat O'Halloran - If God Can Make That, No Wonder He's In Charge.