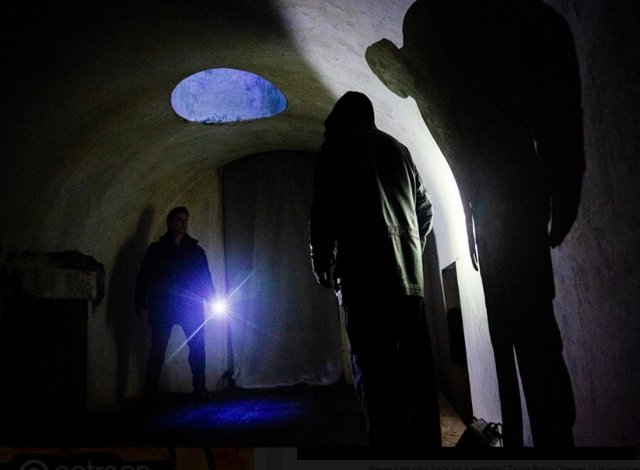 Gregg Kallor Operas presented by Angel's Share at Green-Wood Cemetery
As David Byrne once said, "there is water underground." On Wednesday night, there was whiskey above it, as the final concert of The Angel's Share got underway. Presented by the enterprising Andrew Ousley's Unison Media, this is a unique music experience held in the gloomy depths of the Catacombs, deep within the leafy embrace of Green-Wood Cemetery. For the season finale, Ousley booked a surefire double bill, with two dramatic works by the promising composer-pianist Greg Kallor.
The performance was prefaced by two whiskey tastings: Virgil Kane bourbon atop the hill, Prizefight Irish Whiskey indoors. Then it was off to the necropolis by Green-Wood's cemetery trolley. Upon arriving at the candle-lit space, the audience was ushered to seats, placed two-by-two along the walls of the earthen corridor. The crypts themselves were in a series of side rooms, a constant reminder that we opera-lovers were just temporary visitors in this place.

The next visitor carried a high-powered flashlight, cutting through the darkness. This was tenor Brian Cheney as Doctor Victor Frankenstein, the title character of Mary Shelley's novel and Mr. Kallor's planned first opera of the same title. This was a presentation of Sketches from Frankenstein, the first dramatic threads of that future opera, with Cheney as Victor and bass Joshua Jeremiah as the monster.

Jeremiah led the listener on a deep exploration of the creature's psyche, his innocence, warmth, and finally rage at his own hideous state and exile from a terrified humanity. His tone went from noble to threatening, from sonorous to downright scary as he implored his creator for understanding, for recognition and finally for a bride as misshapen as himself. Cheney stood mute for much of this recitation, backed into a corner of the catacomb with nowhere for him to run. The monster did not lurch or loom, but was all the scarier for his nobility and restraint.

Supported by Mr. Kallor's piano and the cello of Joshua Roman, the work tilted forward into some of the disturbing, later corners of Mary Shelley's landmark novel. Mr. Cheney finally had music to sing,in a fine resonant tenor. He was joined for a love duet by Jennifer Johnson Cano, who took the ungrateful role of Elisabeth, Victor's doomed inamorata. A final incantation from the Monster, delivered from the depths of the room "I will be with you" promised that, when Kallor finishes the opera, her fate will be a grisly one.
Cano was the center of the second major work on the program, a monodrama by Kallor based on Edgar Allen Poe's The Tell-Tale Heart. In the subterranean setting, the grim story of murder and madness, paced by Mr. Kallor's metronome-like piano played out in harrowing fashion. Poe's story revolves around mood, and Cano and Kallor built and arch from ordinary resentment and human frailty to homicide and screaming paranoia. It was a steep and unsettling ride, trawling faithfully through Poe's rich and onomatopoeic text.
This work has been performed before (it debuted at Ousley's other venue, The Crypt Sessions) but it seemed to have particular resonance in the claustrophobic catacombs. Cano charted her devolution into violence and self-incrimination with gusto, her final outcry answered only by that thumping two-note figure from Kallor's keyboard. Was she mad? Had she committed murder? Was there ever an old man to be killed in the first place? All these questions swirled and squirmed in one's mind, and the only answer follows. In a work of this concision and dramatic power, it really didn't matter, did it?
(Reprinted by permission of Superconductor).
Back to Front Page Section Home