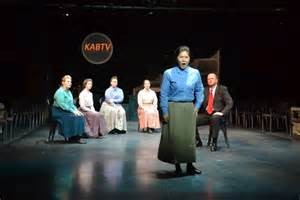 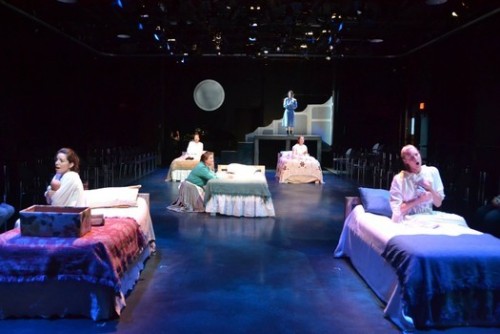 In the world of contemporary opera, October is Nico Muhly month. (September was Tobias Picker’s - his “Dolores Claiborne” was premiered last month at the San Francisco Opera.) Muhly’s “Two Boys” gets its highly anticipated American debut at the Metropolitan Opera Oct. 21. Yes, it seems that contemporary American opera is healthier than generally reported.

Piggy-backing on the “Two Boys” hype, Boston University’s enterprising “Fringe Festival” presented Muhly’s other opera, “Dark Sisters” – they were both written about three years ago - this weekend at the Boston University Theatre’s black box space. A small scale chamber work for seven voices and 13 instruments, it was arranged here for a two-piano accompaniment.

Aside from a predilection for titles comprised of a noun and a single modifier, Muhly is drawn to the contemporary world for stories to set to music. “Two Boys” is about a teenager who gets into an intense and ultimately violent relationship with a younger boy via the Internet. “Dark Sisters” is about a polygamist Mormon sect that has been raided by the Federal government and has had its children seized. It is based on a real event that happened in the Southwest in 2008.

When John Adams pioneered such works in the late ‘80s, it was dismissed as “CNN opera.” Yet opera based on present day life dates back to Verdi’s “La Traviata,” the tale of a high-living courtesan in Paris. And why shouldn’t opera be based on stories “ripped from the headlines”? Stories about Nixon going to China after decades of Red-bashing and the wheel-chair restricted Leon Klinghoffer getting shoved off an Italian cruise ship by a Palestinian terrorist have more immediate resonance than, say, interpretations of Beaumarchais’s third Figaro drama (John Corigliano’s “The Ghosts of Versailles”) or of F. Scott Fitzgerald’s classic novel (John Harbison’s “The Great Gatsby”), to cite only two of the most successful contemporary operas based on historic or classic sources. And Adams’s two operas arguably have the best claim of any of the works of his generation to outlast their creators and early audiences. Does anyone any longer doubt that even as memory of the events that inspired it fades in the minds of those who lived through them that “Nixon in China” is the greatest American opera of our era?

I doubt if such concerns much bother Muhly, a 32-year old who cuts through the music world with apparent aplomb, working with Bjork and the indie-rock band Grizzly Bear and writing film scores at the same time that he writes chamber and choral music and opera. As engaging as he is prolific, he seems to be everyone’s favorite new kid on the block. Although we should be careful standing in awe of his precocity. By the time Muhly composed his two operas, Mozart had written “Le Nozze di Figaro” and “Don Giovanni” and Rossini had composed “il Barbiere di Siviglia.” Yes, times were different then, but still. (BTW, Muhly, who lives in New York City, has local connections: He grew up in Providence; his father, Frank, is a documentary filmmaker, and his mother, Bunny Harvey, is a painter who teaches at Wellesley College.)

Anyway, I’d love to see an opera about an Internet murder. We read about such things all the time, although more often the death is a suicide. How a talented composer brings to life through music drama these new tragic relationships fostered by technology has to be at least interesting. (I would also have loved to have seen “Anna Nicole,” the opera based on the life of the buxom Texas gold digger that ended up being the New York City Opera’s swan song instead of its new lease on life – no fault of the opera!)

I have to admit that I’m less desirous of seeing an opera about polygamist Mormons. Although the text by Stephen Karam (whose play “Sons of the Prophet” was shown Off-Broadway last year) addresses timely issues like the nature of the family, the rights of women and freedom of religion, the life of religious cult communities is of little natural interest to me.

What that means is that the composer and librettist have to work doubly hard to create a music drama compelling enough to draw me in. Although Muhly was fully committed to the subject, and the music he composed has beautiful moments, primarily of the five female protagonists harmonizing, the work left me cold, unable and unwilling to enter into the world of a repellent religion and the brainwashed women it depends on.

The work begins and ends with what should be dramatic situations. It opens with an acapella chorus of the five women protagonists, the dark sisters of the title, lamenting the loss of their children. (“Where’s my ….?”) And it concludes with the shunning of the one wife, Eliza, whose doubts lead her first to question and then to leave the community, losing in the process her 15 year-old daughter who repudiates her and embraces her fellow sister-wives and their “father.” And in between there is the story of the delusional Ruth, long “put out to pasture” as a sex-mate for “The Prophet,” who ends up dying in the desert, alone, longing to “go home.”

But as a whole the opera is static and undramatic, and it seems much longer than its 90 minutes. Muhly has written more of an oratorio than an opera. Trained as a chorister at an Episcopal Church in Providence, he is skilled at writing choral music in the Anglican tradition. Here, he has written some beautiful ensembles for the five sister-wives, but they are more meditative or reflective in nature than dramatic. Particularly lovely is the incantation, “keep sweet,” a Mormon command that serves to keep women subservient, which they sing in different moods, configurations and contexts several times throughout the work. (The idea of the “keeping sweet” chant is not that far removed from the lovely Shaker hymn “Simple Gifts,” which is about keeping humble, if not sweet. Even with their opposing ideas of sex, one embracing celibacy, the other polygamy, Shakerism and Mormonism share the identity of being a chosen people separate from and superior to the rest of society.)

Muhly’s composition is admirably eclectic showing the influence of minimalism, serialism, expressionism and several other of the –isms that developed during the reign of modernism. You might hear phrases reminiscent of Philip Glass, Adams and Corigliano, who was Muhly’s teacher at Columbia. And he is not afraid of a full-voiced romanticism that might put you in mind of Richard Strauss’s more rhapsodic passages. There is no electronic music, however, which might have enlivened the Act II scene in which the women are interviewed by a television personality after their children have been taken away.

For all its apparent variety, the opera ends up being tediously monotonous. I never thought I’d tire of hearing female voices singing at the top of their registers, but “Dark Sisters” is monochrome to its detriment. By the fifth time the sister-wives sweetly intone together their “keep sweet” mantra, I’d already gotten a little sick of it. And they proceeded to sing it a couple of times more, always a little different but in the end not different enough.

In the cast there were three mezzo-sopranos, but Muhly wrote little music that took advantage of the mezzo’s rich bottom notes. You get a sense that he would have preferred writing for boy soprano. As it was, there was only one male voice, the baritone of the The Prophet, who also doubles as the Act II television interviewer. For its own good, the opera needs more male voices and a greater variety for the female voices.

Initially, it was impossible to tell which woman was which they were so much alike vocally. But to Muhly and Karam’s credit they become differentiated as the work progresses. Ruth’s fragile mental state becomes a poignant casualty of the rigid patriarchical order. And in a lively duet Zina and Presendia show how competitiveness and pettiness can exist beneath the smooth surface of “keeping sweet.” Eliza, the rebel, is given the greatest dramatic and musical distinctiveness, and her dilemma – leave the only community she’s ever known for personal freedom or give in to The Prophet’s unbending rule – makes for the opera’s only real drama.

The cast was uniformly excellent. Since the singers are all still students, although most of them are advanced enough to take on professional roles elsewhere, it is journalistically improper to criticize them individually. However, a special citation goes to Kelly Hollis who gave a tour-de-force performance as Eliza.

“Dark Sisters” underscores the problem of theater-in-the-round. The BU Theatre’s black box is a rectangular space with seats arranged around three sides. It seemed that I was sitting in the wrong place too many times during the production, the performers facing away from me to sing to the other side. I suspect that those sitting opposite me must have felt the same thing when the singers faced in my direction. This strikes me as a flaw in David Gately’s otherwise sensitive direction. There has to be a way to do an opera with the audience sitting on three sides that doesn’t leave a third of the audience out at crucial moments.

The space does not have room for an orchestra, although ten instruments were somehow squeezed in for Jonathan Dove’s “Siren Song,” the other opera presentation of this year’s Fringe Festival, which I was unfortunately unable to attend. Since Muhly’s original work called for only 13 instruments, it’s unfortunate that music director Alison Voth didn’t find a way to get more instruments in the space. With only two pianos it was impossible to get any sense of Muhly’s orchestral color, which is too bad because, after all, Muhly is the opera composer of the month.