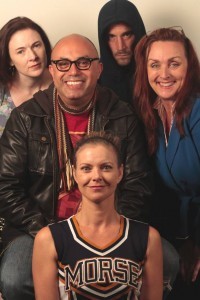 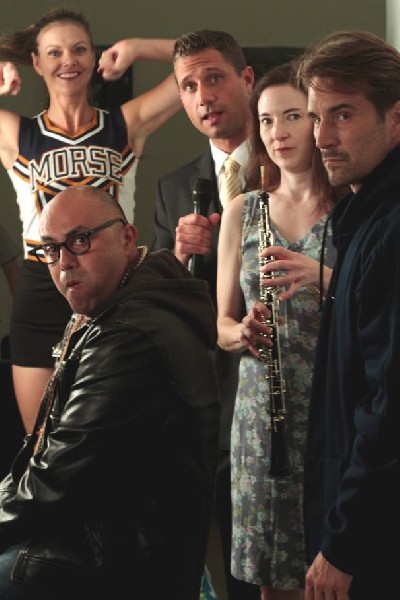 The San Diego Repertory Theatre, under the leadership of Artistic Director Sam Woodhouse, has never shirked from meeting any controversy head on when it comes to presenting politically charged theatrical material to its audiences.  If the Rep’s productions are provocative and probing, so much the better as long as they’re entertaining, is the way I see it.

“The Exit Interview” written by William Missouri Downs and directed by Woodhouse, is a perfect example of controversy, political theatre, and entertainment coming together in the Lyceum Space, in San Diego.

For starters, the story is a comedic and existential exploration of religion, sex, and politics as viewed through the lens of the establishment or the anti-establishment   depending on your personal point of view.  The play opens with a pep talk to the audience concerning the do’s and don’ts, played by JoAnne.

Glover and Lisel Gorell-Getz in cheerleader garb, complete with pom-poms, energy and bounce, who then launch into edgy and funny riffs on Religion, Sex, and Politics.  It should be noted at this point, that the production contains strong language and mature themes.  Those who do not have a healthy sense of humor on the above topics may find various moments in the production somewhat offensive.  However, it’s very topical, especially in an election year.

Our guide through this thorny thicket of words, rules, laws, and policies in today’s society is Richard Fig, played with sly intelligence by Herbert Siguenza, co-founder along with Richard Montoya, and Ric Salinas of the highly respected Latino comedy troupe “Culture Clash”.

Fig has just gotten the ax from a nameless university and is receiving the obligatory “exit interview” from Eunice (Linda Libby), an unctuous human resources flunky who condescendingly spouts the corporate party line with smiles, pretense, and patience.  Fig gets off to a rocky and confrontational start with Eunice, when a masked gunman (Francis Gercke) rampages through building, and into the “exit interview” room brandishing an automatic pistol (shades of Columbine Colorado).

Meanwhile, Nick Cagle as a pompous, self-absorbed, opportunistic, TV reporter along with Glover and Gorell-Getz – portraying several roles in the comedy – rake-over-the coals the favorite whipping boys of the establishment: corporate greed, the government’s entrenched politicians, and those who support the alienation of the masses, etc.  Fig on the other end of the spectrum explains to Eunice the clarity and the appeal, at least for him, of Brechtian themes and its philosophy. “ …People need to think for themselves, and not be led around by others,” he laments.   The result being that neither side moves from their fixed positions (now that sounds familiar).

Sam Woodhouse’s smooth directorial style, however, is what keeps the production from slipping into a total polemic.  Granted, the scale tips its balance toward the anti establishment P.O.V.  But the loyal opposition has its opportunity to get in a few good licks, as well.

The creative team, as well as the talented ensemble of players, shines with Scenic Designer Giulio Cesare Perrone leading the way with wagons, slides, and movable set pieces.  Lighting Designer Wen-Ling Liao provides illumination to create the moods, while at the same time allowing us to appreciate the costumes of Valerie Henderson.  A big kudo goes to stage manager Heather Brose, and her crew for quick, crisp, traffic management touches during the scenes changes.

“The Exit Interview”, is an anti-establishment blast that presents interesting and provocative topics for later discussion over a cup of coffee at a Bohemian-styled coffee shop… but no smoking please.  The satiric comedy runs at the Lyceum Space theatre through October 21, 2012.