Under My Skin at Pasadena Playhouse 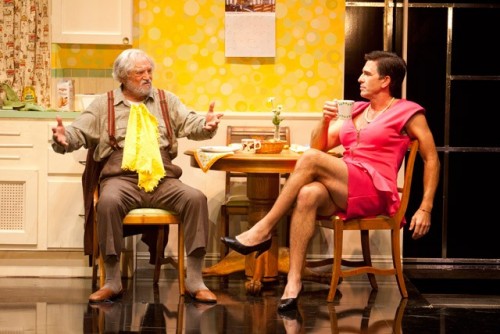 Hal Linden and Matt Walton in a scene from â€œUnder My Skinâ€ at The Pasadena Playhouse. Photo: Jim Cox. 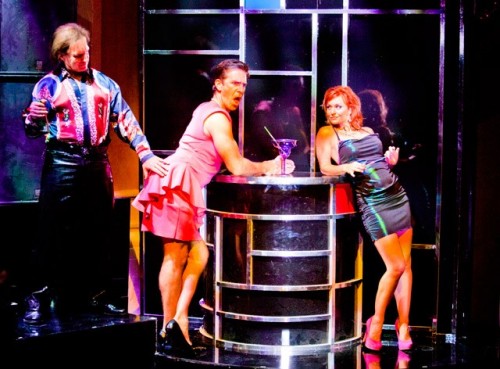 Tim Bagley, Matt Walton and Megan Sikora in a scene from â€œUnder My Skinâ€ at The Pasadena Playhouse. Photo: Jim Cox.

Eve Ensler, playwright and author of the popular play “The Vagina Monologues”, had better watch out if she wants to retain her “favorite playwright status” with females around the globe.  The Hollywood husband and wife writing team of Robert Sternin and Prudence Fraser, have written an extremely funny and tightly crafted, gender-bending, comedy entitled “Under My Skin”, currently rocking the house at the venerable Pasadena Playhouse.  And it’s closing the gap fast.

We’ve all heard the old saying “…before you criticize anything or anyone, you need to walk a mile in their sandals or shoes.”  Well, “Under My Skin” is a screwball comedy that proves that the old adage has merit.  The hilarious comedy, seamlessly and creatively directed by Marcia Milgrom Dodge is chock full of clever directorial touches.  Of course, it helps when one has a high-energy cast of very talented actors who know their way around a farce production when they find themselves cast in one.

This satisfying and enjoyable comedy is blessed with a cast that blends the solid and seasoned performance of older actors like the delightful Hal Linden as Samuel Dent.  Linden never met a punch line he didn’t enrich with his exquisite timing and stage business.

When it comes to carrying the plot part and being the romantic lead who also gets the girl and the laughs, Matt Walton as Harrison Badish, made a believer out of me with his acceptance that the plot situation, as wacky as it is, is totally believable.  Erin Cardillo as Melody Dent, a single, out of work mom from Staten Island, is perky, cute, bright, and is a perfect match for Badish, the cocky CEO of a leading healthcare provider.  Think Hugh Grant and Sandra Bullock from “Two Weeks Notice”, and you sort of get the idea.

The yarn involves celestial interventions and other tricks by the playwrights who invent a power failure in Badish’s Headquarters building with the result being that when the power comes back on, Melody and Harrison have switched bodies and the fun begins.

Tim Bagley’s performance as Dr. Hurtz, is practically worth the price of admission alone. The pelvic examination scene, between Harrison and Dr. Hurtz, brings down the house amid howls of laughter from practically every member of the female audience (males simply can’t relate for the obvious of reasons). Young Danielle Soibelman, as the precocious Casey Dent, Melody’s daughter, completes the ensemble.

“Under My Skin” is a wonderful example of how much fun it can be when presented with a top-rate ensemble performing their stuff.  One cannot say enough about the contribution and personal vision that director Milgrom Dodge brings to this production.  According to the productions notes, when Milgrom Dodge was asked by the playwrights to direct their play she hesitated for about two seconds.  “…I responded with an enthusiastic “Yes!” Not just because the play made me laugh out loud when I read it (I did), or because Rob and Pru are responsible for some of the best television I ever saw (they are), or because I love hanging out with them (I do), but because this is a play whose characters live in the zany world of a screwball comedy while hitting poignant notes that are honest and timely when you least expect them.”  Words of high praise indeed and I’m happy to report the comedy payoff is right on the money.

The creative team led by Milgrom Dodge’s superb and wacky personal vision is matched by the sensational-looking scenic design by John Iacovelli.  His New York City skyline sparkles at night and shines during the day creating both broad vistas and rich intimate interiors, thanks to a splendid lighting design by Jared A. Sayeg, which is ably supported by Philip G. Allen’s sound design and costumes designed by Kate Bergh.

“Under My Skin” is a terrific show that will tickle the funny bones of all that see it.  It plays at the Pasadena Playhouse through October 7, 2012, but I expect it will be heading East to New York in the near future.