Otello at the Lyric Opera of Chicago 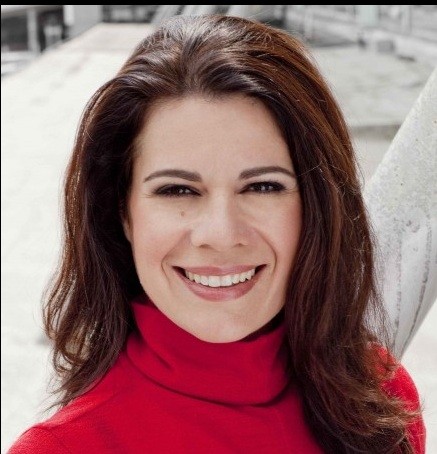 A passionate, but delicate Desdemona 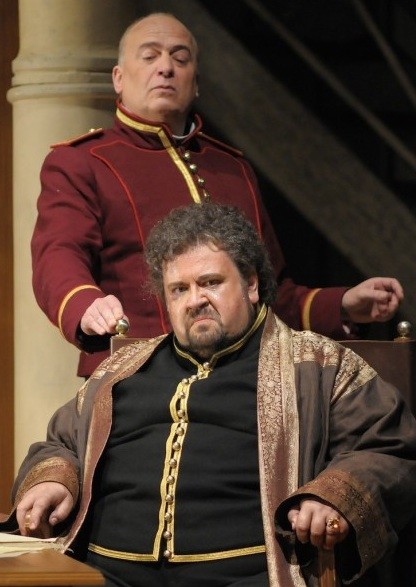 A Man and his Master. Botha and Struckmann. Otello and Iago. 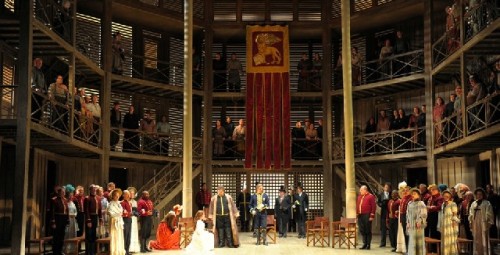 Sets courtesy of the Globe Theater

The apostasy often whispered about the Verdi Otello is that it outdoes Shakespeare. Or perhaps outdoes is not the correct verb. By paring down the drama and sharpening its story arc Otello becomes more powerful.  This is before music is deployed to engage the ear and as well as the mind wrapped around glorious language. The tale of a war hero whose confidence in love belies his military authority starts with a triumphant ‘escultate’ and ends in the silence of his death.

The Lyric revived a 2001 production by Sir Peter Hall, and it is masterful.  Brought forward to the 19th century when the opera was composed, Shakespeare is tipped in the basic ‘public’ set which is shaped like the Globe Theater, a semi circle with three tiers of balconies. Action takes place on all levels and is a delight to the eye.

The pageantry of opera opens as Otello returns home victorious through a wild storm of eleventh chords, woodwind lightning and ripping winds in the strings. The chorus prays for Otello’s safety. The thrilling music of orchestra and chorus wrench the soul as Otello's will be wrenched by the deception of Iago.

The more tortured our hero becomes, the simpler are the settings, until, in Act Four, we are left with plain white canvas walls and a simple marital bed with a draped canopy under which dire acts will be committed.

Johan Botha is a great Otello from his magnificent ‘Escultate’ entrance, which stamps the hero, and resounds through our memories for the rest of the opera.  On no stage is Botha as comfortable as he appears to be at the Lyric.  He holds us in Otello's descent from worldly success to personal catastrophe, “O weeping, o sorrow, they have stolen ht mirage from me. The sun.”

One of Sir Peter’s assistant’s, Ashley Dean, directed the restaging and handled not only the details of the group settings on stage with a flair, often adding details such as a couple kissing, Iago taunting Desdemona’s maid and of course the drinking to go along with the brindisi. Dean has moved Botha through emotional extremes with dramatic effect and directed Ana Marie Martinez’s passion for her husband convincingly.

Very few singers today have the beauty of tone and richness of Botha’s voice, but when his dramatic capabilities are maximized, the effect is truly stunning.  He writes that his voice teacher told him if he could do three Pagliaccis in one evening, he could do Otello. Without breaking pace, without seeming effort, he was onstage producing gorgeous tones for three hours.  From noble repose as he returns to land, to a ‘black insanity,’ as Henry James wrote, Botha is a tiger when he is pacing and when he is pinned.  He negotiates the treacherous arc of his character.

No one does evil like Falk Struckmann.  His Scarpia is non pareil. As Iago, he slivers like a snake and spits venom as he sings his heart out. In his dominance of Act II, Struckmann’s performance gives us the lawless audacity of the man from his Credo, with its broken, nonsymmetrical meters to his Teste Signor, la gelosia.

Ana Marie Martinez took a while to warm to the role, but engulfed in images of chastity, lilies and angels, her fourth act arias, the famous Willow Song and then the Ave Maria, were fully realized and radiant.  She is fluid throughout her range and has excellent control.  Her rich Veridian tones are elegant and also dramatic.

In smaller roles, both Antonio Poli as Cassio and John Irvin as Rodrigo stood out for the beauty and clarity of their voices.

It is a pleasure to hear Bertrand De Billy again.  At the helm, he brought forth all of Verdi’s glories and kept a perfect balance between the principals and orchestra.  The music had a scalding immediacy and the white heat of the drama burned through. Thrilling drama. Thrilling opera.