Two Offerings This Season, One Old, One New 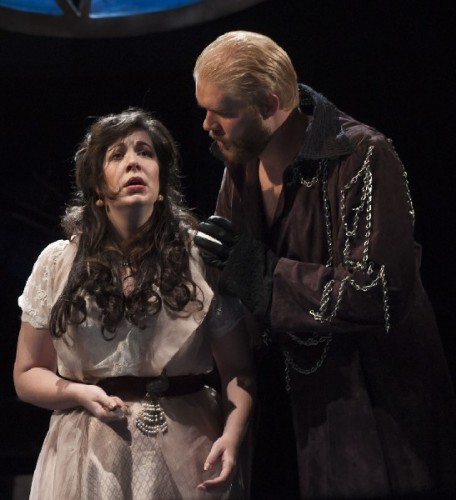 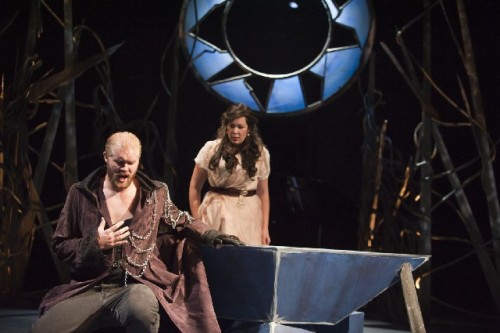 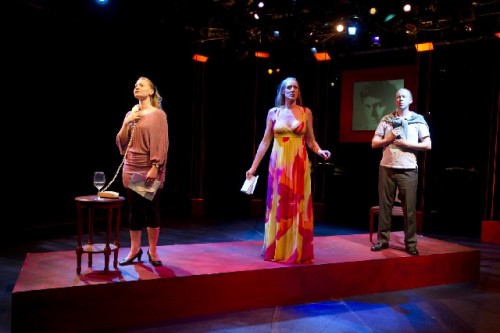 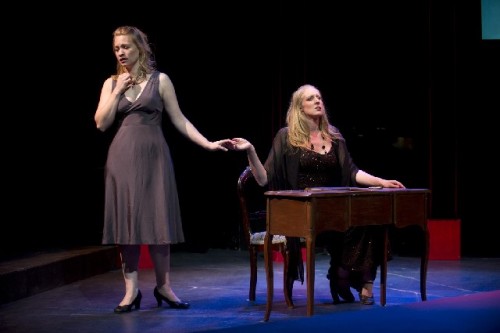 You’ve got to hand it to Boston University’s Fringe Festival. With a single piano replacing a large and lush orchestra, a next-to-no budget production and two student singers, it presented a more theatrically satisfying production of Bela Bartok’s “Bluebeard’s Castle” than the mighty Boston Symphony Orchestra under the baton of the sainted James Levine did last winter.

True, Levine didn’t even attempt to suggest the theatrical nature of the work – which was strange, considering his decades’ long direction of the Metropolitan Opera – and the spunky Fringe production didn’t even try to capture the shimmering soundscapes of Bartok’s score, which the BSO so scintillatingly nailed.

But the chilling tale of the demented Duke in his gloomy castle entertaining his latest fiancé while his previous wives are locked in a closet worked its creepy magic better in B.U.’s tiny black box theater across the street from Symphony Hall than it did in that august McKim Mead and White pile.

And that’s what Fringe Festivals, Off-Off Broadway productions, Annex Productions - whatever you want to call them – are supposed to do: Offer fresh and vital responses to old, often neglected works while nurturing the new. The B.U. Fringe Festival attempted both this October. It succeeded at one, less so with the other.

B.U.’s Fringe Festival was founded 15 years ago by Sharon Daniels, director of B.U.’s opera programs. The goal was to present rarely performed one-act operas in a workshop environment in which students in the school’s Opera Institute could get valuable performing experience. In earlier years, a diverse program of real obscurities such as a previously unperformed opera by Paul Bowles, William Bolcom’s “Lucrezia” and Kurt Weill’s “The Tsar Has His Picture Taken” were produced.

In recent years, the Opera Institute initiative joined forces with B.U.’s School of Theatre, and plays have become part of the programming, too. Spoken theater is outside my beat, but let it be noted that Lynn Nottage’s “Intimate Apparel” will be presented Oct. 22-29.

This year’s operatic offerings – “Bluebeard” and Jake Heggie’s “Three Decembers” - are mainstream by comparison. Bartok is, well, Bartok, and if his one-act opera, composed in 1911, is an awkward fit in opera houses – the only one-acters that seem to get staged regularly are the verismo twins Cav/Pag and the three independent acts of  Puccini’s “Il Trittico” – it does get heard more and more often as its musical richness and contemporary appeal is better appreciated.

The San Francisco-based Heggie is arguably the most popular opera composer in America. “Dead Man Walking,” his opera based on Sister Helen Prejean’s uncompromising book against capital punishment, has been given 15 productions internationally since its 2000 premiere at the San Francisco Opera. “Three Decembers” was commissioned in 2008 by the SFO and the Houston Grand Opera, two of the major companies in the country.

Once you got used to the fact that instead of an orchestra there was just a single piano (which was, btw, played with the requisite intensity and color by William Lumpkin), the Bartok was a riveting experience. The set, twisting art nouveau vines over which a distorted Gothic rose window loomed, was properly ominous. A small construction, twisted in its proportions, which sat in the center of the performance space, did not look promising, but it fulfilled a number of functions adequately.

Both actors were visually right for the characters they assumed. As Duke Bluebeard, Dan Sorensen was tall and bearded, his blond hair slicked back like a Russian Mafioso. He wore an ankle length coat dripping with chains under which an open shirt exposed his pale and hairless chest. His visual image sent a chill across the theater.

As Judith, Celeste Fraser was visually the perfect Symbolist femme fatale (of course, here she is victim rather than seducer). Her long, loose dark hair, her unfastened white gown, which billowed when she ran, and her pallor combined to create an image reminiscent of women painted by Edvard Munch and Gustav Klimt – voluptuous, sensuous creatures who drive men to commit terrible acts.

Vocally neither can compare with Albert Dohmen and Michelle DeYoung, who sang the roles at Symphony Hall in January. But both singers, advanced students, are extremely promising.  Sorensen has a well-modulated, resonant baritone that was particularly powerful in his middle range. Fraser could turn out to be a dramatic soprano people will pay to see, but her lyrical voice needs serious work, especially in the higher registers. Individually they inhabited their characters, Fraser particularly, but they were stiff and uncertain in interaction.

In such a small theater – B.U.’s black box seats 90 – the audience can notice every minute movement of the face and body. That can be great – at its most visceral the production reminded me of Peter Brooks’ legendary “Carmen” (not that it equaled it) – but it also exposures insecurities and imperfections, those moments when the singer loses character in order to just produce the notes. In many ways, singing in a big opera house with a large orchestra in a pit separating the stage from the audience, is easier – if you have the chops.

Anyway, I think, if impresarios are on the ball, we should expect more productions of “Bluebeard’s Castle” in the future. Essentially it is a haunted house tale, the ur-haunted house tale. At a moment when Hollywood seems to release every week a movie featuring a haunted house, zombies, flesh-eating monsters, the walking dead, home invasions, etc., Duke Bluebeard and his wives could fill opera houses of all types and sizes. I can envision midnight performances in which audience members dress the parts. (Well, maybe in Los Angeles or Berlin. Can’t you see Johnny Depp and his posse dressed up as Bluebeard and his wives?)

“Bluebeard’s Castle” offers a haunted house overgrown with vines, a hysterical wife, a murderous husband and a closet full of corpses; “Three Decembers,” a melodrama on family crisis – Mom’s a diva, Sis is a drunk, Brother is gay – that gets nicely resolved in the end, if only after the old Bitch is dead.

If I referred to Menotti, a composer who flourished in the decades after World War II, it is because “Three Decembers” is so dated – in its musical vocabulary and in its dramatic structure. Heggie’s musical language is tonal and it is meant to please. His best composition tends to be for unsung passages, here the interludes between scenes. Some of them made me think of the piano music of Samuel Barber, Menotti’s long-time partner. They were complex, astringent, sometimes even jazzy.

One wishes Heggie would let himself go and bring that side of his composing skill to his songs and arias. The blame for the latter rests on Terrence McNally, who wrote the original play on which the opera is based. His outdated camp posing, his obsession with female stars, his old-fashioned dramaturgy are all on view here. I loved “Master Class” and “The Lisbon Traviata,” too, but no one ever thought of them as anything more than an evening’s entertainment. Opera is supposed to be more than that, isn’t it?

Not that “Three December”’s not a pleasant enough evening in the theater, and at 90 minutes without intermission it doesn’t eat up too much of your precious time. In and out with time for dinner after. And it tells a story about a Broadway star – Madeline Mitchell – and her two alienated children, Bea and Charlie, that is none too challenging, unless seeing a gay son portrayed on stage is a challenge. McNally, a member of “The Boys in the Band” generation, seems to assume that it might be. See what I mean about dated?

There is no surprise why Heggie is so popular. He writes well for the voice. Singers, some of them big stars, love him. (No one has ever accused opera singers of having great taste.) Frederica von Stade, a real diva, starred as Maddy in the premiere. Heggie has the capacity for writing tunes that stretch occasionally into real arias and songs and ensembles.

“Oh we were happy that day” – a reverie of a walk over the Golden Gate Bridge that might never actually have occurred – is a lovely and lively trio for the ensemble; and “You will feel like a winner in a great pair of shoes” is a spritely duet for Bea and Charlie. And Heggie shows he can write an extended scena for three voices in the climactic scene in which the Horrible Family Secret Is Revealed. (Dad was a drunk who threw himself under a train.)

Heggie also turns out a couple of Broadway musical style tunes. “Daybreak,” Maddy’s star turn, in which she belts, “No regrets, no more tears, no more lies, no more fears – I’m through with crying over you and mourning the past” is ready to go for a Liza Minnelli revue.

Heggie is the darling of both the San Francisco Opera and the Houston Grand Opera, which continue to heap commissions on him. “Moby Dick,” god help us, is scheduled for 2012.  (Do I hear, “I’m gonna wash that whale right out of my hair”?)  But his real talent might better be suited to the sophisticated music theater composers like Adam Guettel have pioneered.

But it’s all so banal. We’ve heard it before, we’ve seen in before in countless places and formats – in the afternoon soaps, in Douglas Sirk movies, in Bernstein’s “Trouble in Tahiti,” in reality TV. Contemporary ironists like filmmakers Almodovar and Todd Haynes have learned how to send up such sentimentalities, but Heggie and McNally deliver them to us, uh, straight.

With its limited resources, the production serves the work well. The set, essentially a raised red box that fills the performing space on a diagonal, suffices, and the lighting is effective. The costuming rises to the occasion. The chamber orchestra is reduced to two pianos, which after an assaultive entry settled into greater musicality.

The singers were excellent. Mezzo Vera Savage played a convincing diva and was able to sing powerfully both operatically and as a Broadway baby. Soprano Ruth Hartt as Bea was a pleasing soprano who captured the sadness but essential goodness of her character in her movement and singing. As Charlie, Jonathan Cole nearly stole the show from his dominating mother. And his lament over his dead partner’s boxes of clothes  - nod to Manon’s “Adieu notre petit table” - was touching.

If only it had some substance.

B.U.’s Fringe Festival undoubtedly considered it a coup to produce “Three Decembers” and get Heggie to come and give master classes. But if it wants to retain its claim to being a true Fringe Festival it should strive to look for work, vintage and new, that offers more challenges to both audiences and students.