Grace Kelly and Phil Woods at the Colonial 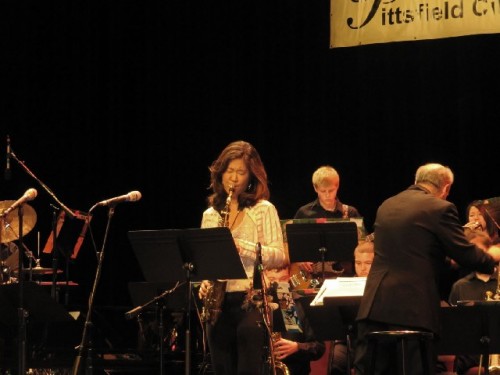 Grace Kelly spent the afternoon rehearsing with the Berkshire jazz Youth Ensemble to perform a tune during their opening set. Giuliano photos. 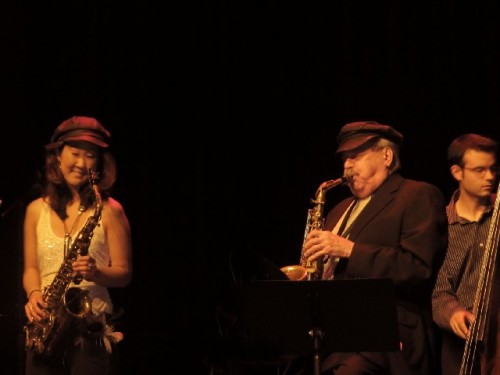 Kelly performing with the Man with the Hat alto player Phil Woods. 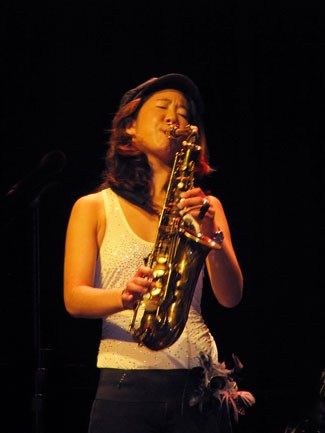 Kelly was just 12 when she recorded her first CD. 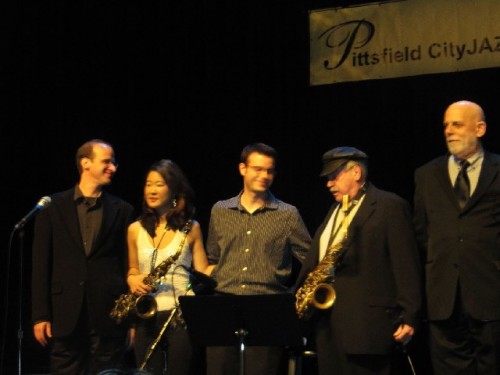 Kelly and the band taking a bow. 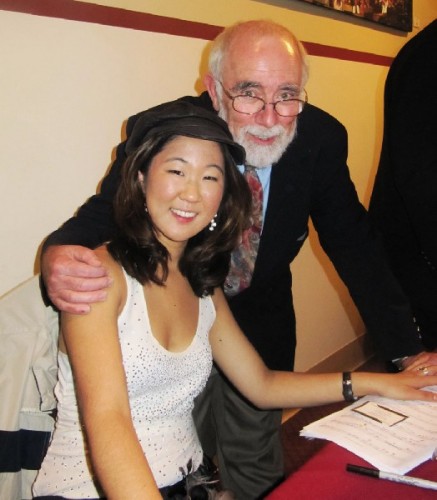 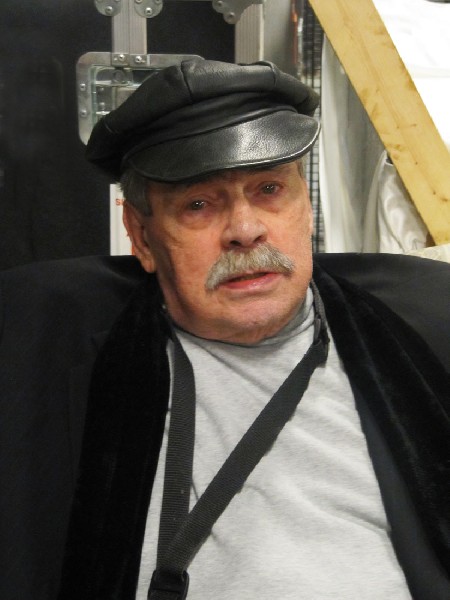 The Man with a Hat back stage. 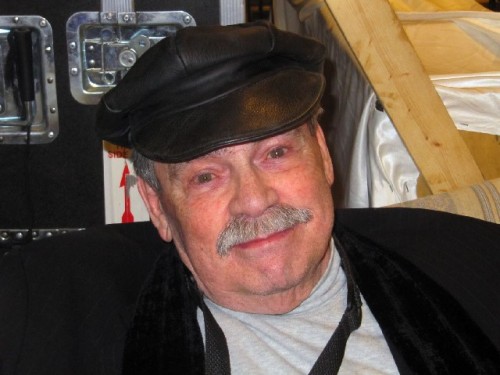 The renowned musician grew up in nearby Springfield. 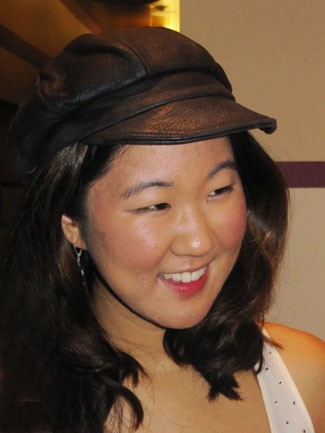 Meeting her fans after the gig. 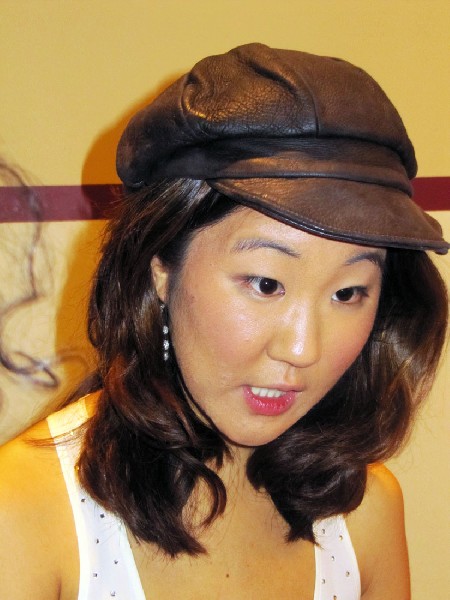 Woods passed the hat to Kelly. 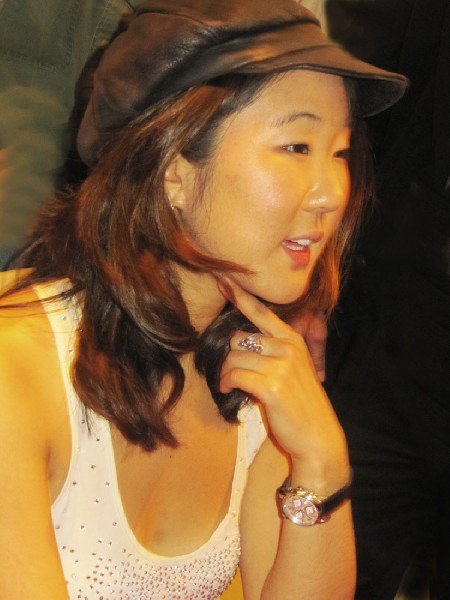 It was five years ago to the day when the 75-year-old NEA Jazz Master, alto player Phil Woods, first performed on stage at the Colonial Theatre with the then 14-year-old alto prodigy, Grace Kelly.

That was year two of the annual Pittsfield City Jazz Festival organized by the resourceful, dedicated, and titubating Ed Bride.

The two musicians had met a month before jamming on stage in Pittsfield. That event has become a part of jazz history.

Woods is known as The Man with a Hat. That evening he was so blown away by the teenager’s chops that he literally passed, not a torch, but the hat itself. It was the highest and most personal honor that an artist of one generation might bestow on another. The more remarkable as it spanned not one but two generations.

Since then they have performed often together and toured in Europe.  In the lobby after the show Kelly was on hand to autograph items for fans including a briskly selling CD Grace Kelly Phil Woods: Man with the Hat.

I bought one and popped it into the car stereo for a serenade on the way home. It contained some of the material performed last night which, wouldn’t you know it, was being recorded for a memorial Live DVD.

The group on the album includes Kelly, alto and vocals, Woods, Monty Alexander, piano and keyboards, Evan Gregor, bass, Bill Goodwin, drums, and Jordan Perlson, percussion. The Colonial set featured Doug Johnson on piano and Perlson was not on stage.

Woods, who grew up in the Springfield area, introduced a former neighbor, Greg Caputo, to sit in on drums for a couple of tunes. He brought down the house with a solo which my aficionado buddy, Robert Henriquez, compared to such legends as Buddy Rich and Max Roach.

During a brief chat back stage before the gig Woods reeled off a list of outstanding players from the Springfield area. Why Springfield? Dig it man. Just dudes laying back and stretching out in the country.

Jazz is wherever the cats get together to groove.

Especially as we caught glimpses of the passing of the torch with the hope of a coming generation of artists. Not just the headlining Kelly and Woods but a remarkable opening set by the 18 piece Berkshire Jazz Youth Ensemble.

From all over Berkshire County it is quite an accomplishment to bring together such a swinging band. Particularly given that there had been only five rehearsals they were just terrific. The band with oh so talented youngsters spent the afternoon rehearsing with Kelly. She gave a class and also fronted a tune. The BJYE performs original charts from the big band era including classics by Count Basie.

At the now ripe old age of 19 Kelly is the real deal. Not just a phenom she is a fully mature artist with truly masterful chops. Her playing is subtle, rich in velvety tone, inventive, and stunningly intelligent. The norm for such a young player is to imitate the elders. That may have been the starting point. There are stories of her family sitting around on Sundays grooving to Stan Getz. But on every level she has developed her own style which is up there with the best of the best of the legendary masters.

But as Henriquez commented while we sat there just blown away “With a wonderful freshness.”

It is so evident in the way she moves to and absorbs the music. There was an infectious smile as she would glance over and appreciate the playing of Woods. Then fall in to match him lick for lick and then some. As a younger player she has more stamina evident in long flowing lines, bent notes, and fleeting runs in the upper register. Compared to which Woods has a more flat out, robust, hard bop sound that speaks to decades of life experience. What Kelly lacks in that regard she makes up for in raw talent, intensity, and feeling.

And she can sing. Man can she sing.

We were just in orbit when she ended the set returning to the stage for an encore of “The Nearness of You” accompanied by Johnson on piano. With stunning showmanship she moved to the edge of the stage and sat on the steps. It was an endearing gesture of intimacy with the audience.

It was an indicator of her stage craft and showmanship. During a medley of three songs with the superb bass player Gregor she improvised. On the spot she wove a story line with an oh so local slant about the joy of performing in Pittsfield. Yes. That’s right. Pittsfield. It made us feel so good to be there and share in this unique experience.

The style and playing of Woods and Kelly are incredibly compatible. I commented to Henriquez that one would fail the blindfold test when listening to the CDs which we both purchased. That proved to be absolutely true while I listened on the drive home. It will take careful and prolonged attentive listening to pull them apart. And when they play together, well, that’s just sublime.

Last night they opened with the tune that they first jammed on five years ago “I Remember April.” It proved to be an extended jam as they stretched out. Kelly wrote a tribute to Woods which they performed and is the title track of their CD “Man with a Hat.” From the recording they followed with “People Time.”

Mid set Woods left the stage for a break. Caputo sat in and brought the music to a new level. Then Kelly introduced an original blues with a Crescent City twist which she calls “Philosophical Flying Fish.” For this she switched to a curved soprano sax.

During the performance she would frequently change reeds. Seems she puts them through their paces and is such a perfectionist. This is something I have never seen before. Now and then a musician might change reeds but not with such frequency during a set.

Despite her superb alto playing, for me, the emotional highlight of the evening was a medley of three songs accompanied by bass- “Home is Where the Heart Is” “No More Blues” and “Bye Bye Blackbird.” It is on the last of the trilogy that she vamped with the local twist.

Her vocal style closely follows her alto playing with the same subtle dips, slides,  stretches, and dives. She has a soft, subtle voice and an easy lilting delivery. With a passion beyond her years she made us feel how she wanted to embrace us as surrogate lovers in her arms. This from a girl not legally old enough to drink. Just imagine when she grows up and adds the rigors of romance to those torch and saloon songs.

When Woods returned they skid out with a scorcher Bud Powell’s “Web City.”

Best of all I can’t wait for the DVD of Live at the Colonial. What a thrill it will be to recall having been there.

Jazz in Pittsfield. Ain't that a hoot.

We sure could use a whole lot of that there. Youzah.