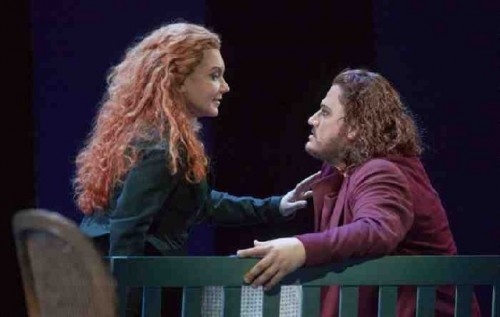 Marina and Dimitri provide love interest in this version of Boris Godunov. She is a temptress, he more interested in love than political power, is fanned on by Marina. 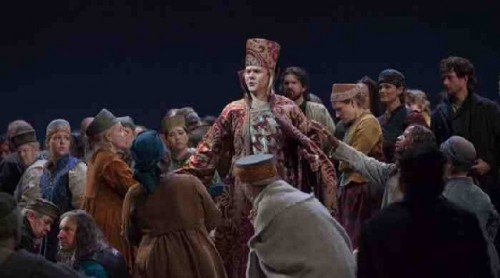 The masses are ever present as the chorus in this new Met production. 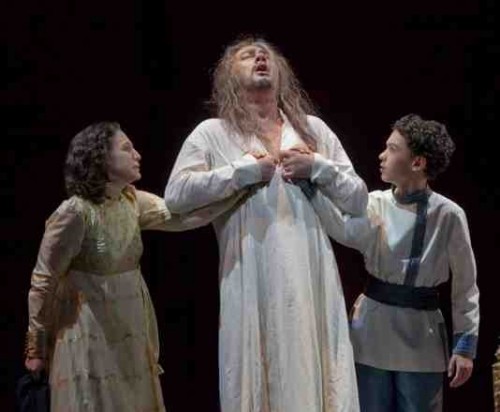 Boris Godunov and his children. His farewell to his son rival Wotan’s in Valkerie in beauty and poignancy. 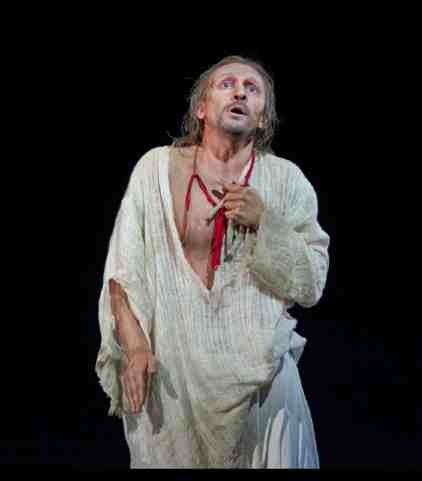 Andrey Popov is a touching fool, who ends the opera. Sound and fury signifying everything?

Boris Godunov at your local theater on Saturday

Dress rehearsal for the HD broadcast of Boris Godunov, at your local theaters on Saturday, October 23, took place on Monday, October 18. Those wonderful spindly legs sporting cameras extended from boxes on house left and right. A small camera scrolled back and forth behind the prompter’s box. No, this was not an ordinary night at the Met. We are on high alert for the upcoming performance. I hear the same way I do on any other night, and this Modest Mussorgsky opera certainly is not modest. It is a huge piece and often of consummate beauty.

Valery Gergiev is a superb conductor of the music of his native Russia. In Mussorgsky’s magnificent score, he succeeded in holding together various styles, the soloists, and omni-present chorus with the Met orchestra, a real triumph.

Rene Pape soars as Boris. His bass is one of the best in the world today, and the feeling he brings to the farewell he sings to his son rivals Wotan’s at the end of Valkerie. (Pape also sings Wotan).

This setting of Boris, by Ferdinand Wogerbauer, takes advantage of the stage’s height providing a magisterial, if simple, background. Russia’s size, often obscure to Americans accustomed to looking at maps in which the US is at the center, thus dividing gigantic Russia in two, is its true size at the Met. The costumes are either peasant, or lush regal, which should play well in HD.  So too the two horses.

The Russian soul displays huge talent which often succumbs to self-destruction. Boris, guilt-ridden over his participation in the murder of a little Tsar scheduled for succession, is tormented.

Little Tsar Dimitri survived a near death experience and is plotting to regain the throne and take his rightful place. Aleksandrs Antonenko, heralded as Otello after he had been lauded by no less than Maestro Riccardo Muti, is the tenor "we have been waiting for."  Large of voice, handsome, and daring to tackle the most difficult roles,  he is a revelation and worth the price of your ticket.

The chorus is present on stage throughout. Representing the vox populi, they sing church music, Russian folk, and just plain beautiful Mussorgsky. They are choreographed to move on and off stage en masse. In them, one feels the struggle of the Russian masses over centuries. Condoleezza Rice, a musician and Russia expert, likes this opera above all others.

Notable voices are Valerian Ruminski, Mikail Petrenko and Vladimir Ognovenko, a bevy of basses far more successful than the bevy of tenors on stage for Armida.

The women are less effective, but Ekaterina Semenchuk, as a seductress manipulated by the church to push Dimitri into a throne-grab, is lovely to look at and often lovely to hear.

Peter Stein was scheduled to direct, but abandoned the Met after he was panned for a production of Gogol’s Dead Souls last summer and/or had visa problems.  Stephen Wadsworth, polymath musician and dramatist, who stepped in bravely, gives us a fine staging.

If you are not lucky enough to get tickets, try Mussorgsky’s "A Night on Bald Mountain," on YouTube.  Millions of viewers have already watched. From the Disney film Fantasia, the music conducted originally by Leopold Stokowski, and in a 2000 update by James Levine, is arresting and universally admired by the Facebook set. The graphics were created 70 years ago, but the brilliant animation could well be a model for future Met sets.  In the meanwhile, grasp Russia at its most complex and beautiful in this Boris.