Will Any Gentlemen to October 27

College of the Desert’s Theatre 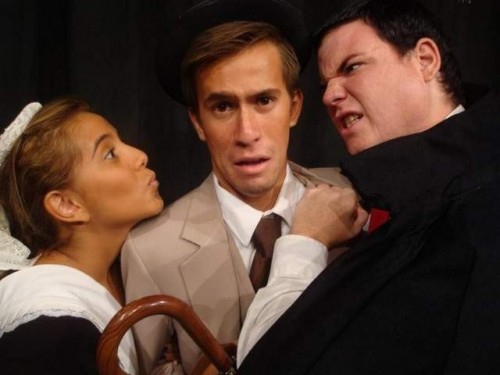 Tres Dean, the director of “Will Any Gentlemen?”, currently on the boards at College of the Desert’s Theatre Too stage, and the creative engine that runs the Theatre Department, is racking up credits and points as the desert’s go to guy for British farce.

Dean has a successful track record of rounding up theatre students who get on his comedy/farce wavelength and then have a ball with one of theatre’s earliest art forms.
There’s a knack to doing British farce and when done properly it can be a hilarious, belly-laughing induced, comic romp. French and European-style farce on the other hand are different kettles of fish.

In farce, once the curtain goes up there should be a slow build-up during the early moments allowing the audience time to absorb the exposition, that sets-up the madcap antics and action that follows. One must be careful not to start at a point so manic that the actors have vocally nowhere to go, and we find the characters shouting at one another. British playwright Vernon Sylvaine, is a keen observer of his fellow Brits and he gently pokes fun at their customs and societal idiosyncrasies, which overall, are nicely adapted by Dean and performed by his energetic cast. I wish, however, that I had heard more orchestration and modulation of the actors’ voices and less volume. Theatre Too is a relatively small house venue.

“Will Any Gentlemen?” affords the eager and talented cast the opportunity to perform and spread their farcical and comical wings on a stage set designed by J.W. Layne, one of the desert’s finest design wizards, and lighted by journeyman lighting designer Doug Ridgeway. Costume designer Jennifer Bennett (a pretty fair actor in her own right) provides the glitz and glamour for the ladies, and “sensible” suits, trench coats, and hats for the men; so necessary for the famous English weather. Special kudos to Lynda Shaeps and Allyson Jeffredo for make-up and wig designs respectively.

With a large cast of fifteen performers it’s difficult to list the entire cast, however, certain performances stand out: Miranda Hane as the saucy maid Beryl; Mason McIntosh as the pencil-thin and acrobatic lead character Henry Stirling; Xan Raymond as the German accented Mendoza, the Music Hall hypnotist who sets all of the silliness in motion; Brian Johnson as Dr. Smith the forgetful, dithering doctor who makes house calls again and again in search of his stethoscope; Taylor Burns as Henry’s exasperated wife Florence Stirling; and John Bolth, in a little comic gem of a performance as Detective Inspector Martin.