The Perfect Host at WFF 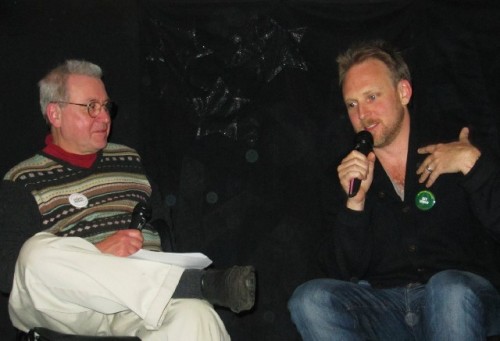 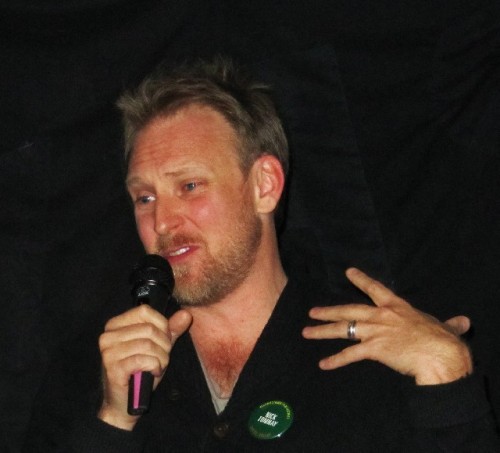 This is the Australian writer/ director’s first feature film. 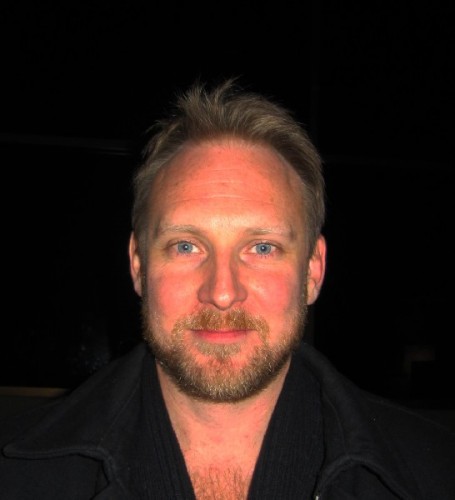 One on one after the screening. 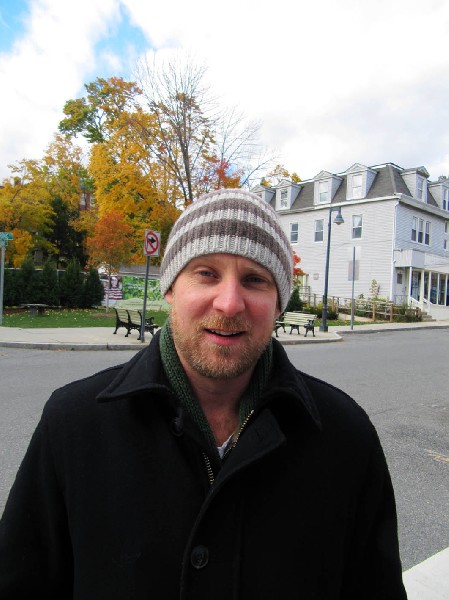 Hanging out in Williamstown during the festival. 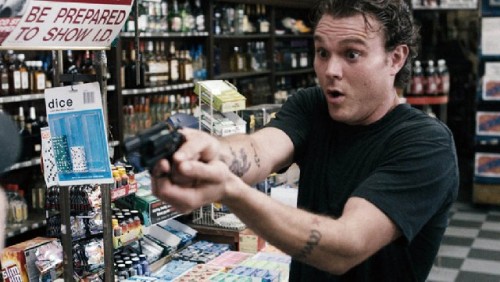 Clayne Crawford is a robber on the run. 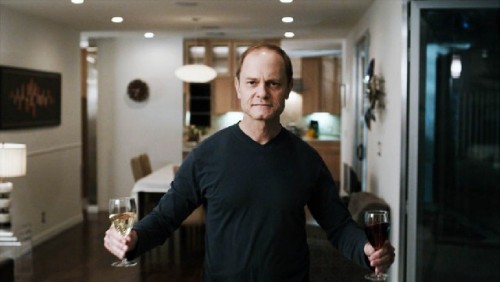 Will that be white or red asks the Perfect Host, David Hyde Pierce. 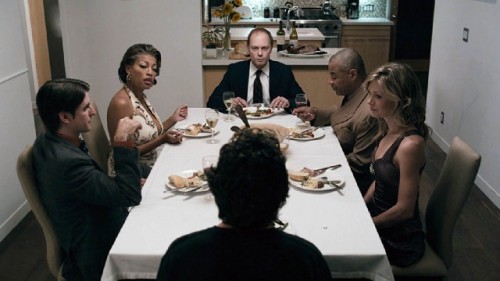 Guests at the dinner party truth or dare.

Resuming the second weekend of the 12th annual Williamstown Film Festival, artistic director, Steve Lawson, introduced “Fright Night.” The Festival continues through Sunday, October 24. With this fourth feature film, The Perfect Host, in a program of nine, so far, Lawson is batting four for four. Awesome.

There are so many plot twists that the first feature film by Australian writer/ director, Nick Tomnay, is difficult to follow, and impossible to describe. This is such a tightly crafted and compelling thriller that we want to convey just enough enthusiasm to urge you to see the film, but not so much detail, that it spoils the fun.

During a post screening discussion with Tomnay, who left San Francisco at 4 AM in order to attend the event, Lawson suggested that like the marketing of Hitchock’s Psycho “Nobody will be admitted after the first fifteen minutes of the film.”

The reference to Hitchock evokes big shoes to fill but, with his first film, Tomnay is off to a great start. The director got a boost by convincing the established actor, David Hyde Pierce (Warwick Wilson), to star in the film for little or no money, and points, when and if. Just days before shooting, after more than six years of development and raising the requisite $1 million, Tomnay signed a terrific co star, Clyde Crawford, to play a desperate bank robber on the run (John Taylor).

Another last minute casting was fellow Australian, Helen Reddy (Cathy Knight), as Wilson’s nosy, next door neighbor. You won’t recognize the feminist singer in her first appearance in front of a camera in 20 years. Tomnay and Reddy share an agent but they met on the set. She liked the script enough to emerge from seclusion.

We first encounter Taylor limping away from the robbery. It is never really clear why he has injured his foot. But he needs to clean the wound and rest from his exertion. He tries to talk his way into Knight’s door as a fellow Jehovah’s Witness. But she sees through the ruse and slams the door. He stumbles on to the neighbor’s mailbox and finds a post card from Australia signed “Love Julie.”

Ringing the doorbell of Wilson’s home he fabricates an elaborate story of lost luggage at the airport, being mugged, and their mutual friend, Julie. At first, he is turned away but then he is invited in and grilled about Julie. Taylor has allegedly just flown in from Down Under.

The very swishy, and seemingly helpless, Wilson slithers about preparing for guests about to arrive for a dinner party. Offering wine, red or white, Taylor, any friend of Julie is a friend of mine, is invited to clean up and stay.

There is duck roasting while an elegant table is set. The lies and deceptions, on both sides as it turns out, become ever more elaborate and difficult to sustain. Music on the radio is interrupted by news of a bank robbery. Taylor orders Wilson to “shut the f’ up” so he can listen. The cat’s out of the bag. He threatens his host with murder unless he plays along and calls off the party.

While Taylor is a career criminal, who has done time, he has robbed the bank to raise money for his severely ill girlfriend. She is played by Meghan Perry (Simone Di Marchi). So there is a shred of goodness that shines through as he threatens and abuses the seemingly helpless Wilson.

There is a reversal as the tables turn and the abused, Wilson emerges as an over the top sadist. We are shocked and amused as the change becomes ever more elaborate and outrageous. There is a dinner party, after all, or is there? Tomnay asks us to go along and swallow all those twists and turns. For some, perhaps too many to be credible, and for others, just delicious fun.

Pierce delivers a totally gonzo, over the top performance. As Tomnay commented to me, during a gathering after the film, Pierce “waved his freak flag.” The role is so juicy and unique that it is easy to understand why he seized the opportunity. It brings a whole new dimension to his bag of tricks.

During the talk back, Lawson commented that he has known Pierce, from the beginning, when he started as a non equity actor at the Williamstown Theatre Festival. Pierce wanted to attend the screening but is currently on Broadway.

With a lilting, Australian accent Tomnay was charming and accessible. We discussed the challenge of writing and directing his first film. There have been a lot of frustrations. Given the bad economy it is a really tough time for independent filmmakers.

“It’s really hard to break into Hollywood” he said. It took years to raise the very modest $1 million for what turned out to be a 17 day shoot. As he told Lawson, with a small crew, they took a lot of chances including hand held shooting, on location, without the requisite permits. It was such a small operation that “The cops didn’t bother us.” Most of the film is shot in the home of Wilson. With such a limited set the film might be readily adapted to theatre. This also put a lot of pressure on the synergy between Pierce and Crawford to carry the film. Mostly, Crawford is the straight man, while Pierce focuses on shtick and stunts. A conga dance sequence featuring Pierce, and a chorus line, is just hilarious. Pierce whips about like a crazed, disco, boa constrictor.

This low budget film, by a first time director, has enjoyed some luck. It has been shown at Sundance and Cannes where it received a mixed reception. The film has been acquired in a distribution deal with Magnolia Pictures. Because of the short production costs it doesn’t take much to earn back the investment for the producers. The film will have a limited release in LA and New York, in the spring, and then will be available as Video On Demand.

We asked if he expected to make any money on the film? With a whimsical gesture Tomnay formed a Zero with his hand. “Nothing” he said. But, that’s insane, I commented considering that the film took years. "How, and why, did you do it" I wanted to know?

“That’s like asking an artist why do you paint pictures that don’t sell” he said. Tomnay added that the past few years of developing the film were possible because of “My wonderful and supportive wife.” They both were in advertising and he continues with all aspects of shooting and production. It was this experience that led up to his first feature. But he implied that her patience is running out. She wants to know when he might start to make some money.

Of course, having succeeded in shooting his first feature, whether or not it goes anywhere, provides the kind of bona fides required to get support for the next film. It is a work in progress. Backers want to see something before they pony up.

Taking a dawn flight, coast to coast, to talk with a handful of people at WFF, is all a part of launching a career. In the current climate, studios are only interested in big budget, high return films, with bankable stars that fill the megaplexes at the mall.

I asked him to handicap the odds of an indy, low budget film like The Perfect Host breaking out to larger distribution. Many of those films never move on from the festival circuit and go direct to DVD and Netflix. The lucky ones break even.

Somewhat exasperated at the question he answered “You can’t think that way.” These films get made because there is conviction, heart and soul in the project.

We had been talking for some time when I told him that, by the way, I’m a critic.

The change was instantaneous and palpable. “You’re the enemy” he said with truth layered by humor and irony.

“Not when we like your film” I responded. Which I do. Big Time.