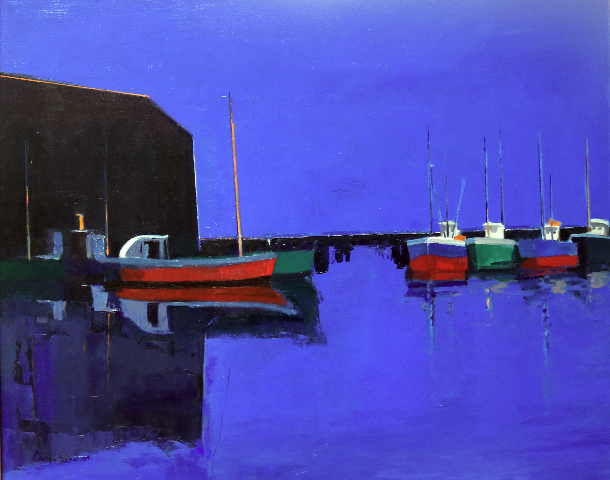 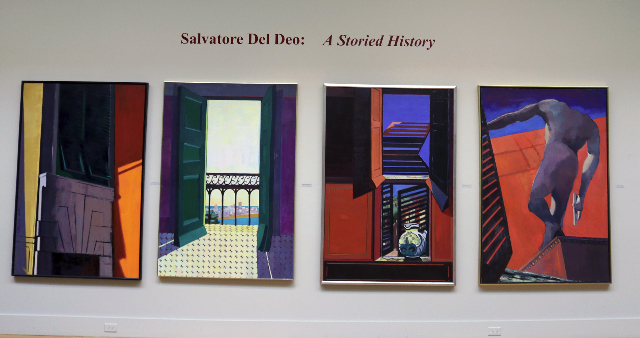 The artist is recipient of the museum's 2017 MUSE award. 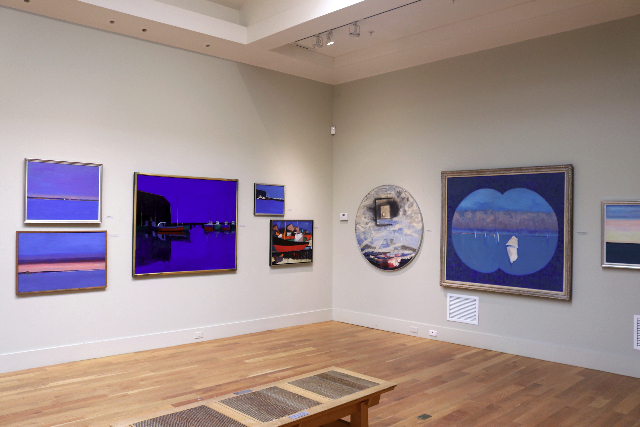 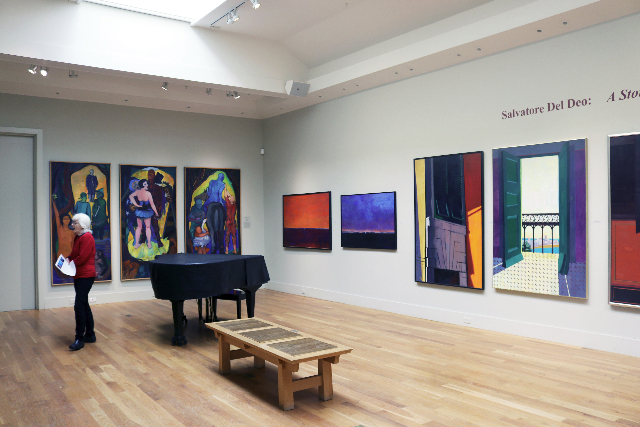 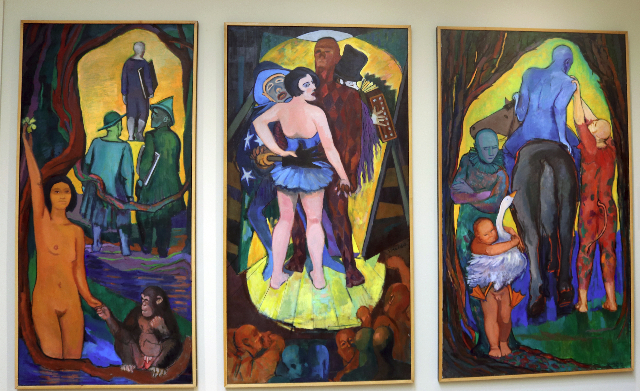 Triptych conveys homages to Gauguin and Beckmann. Images courtesy of the artist and Cape Cod Museum of Art, 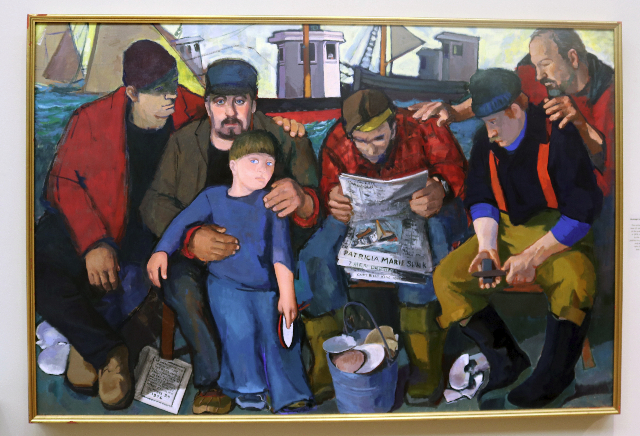 Left panel of triptych about sinking of Patricia Marie in 1976. Images courtesy of the artst, CCMOA and Berta Walker Gallery. 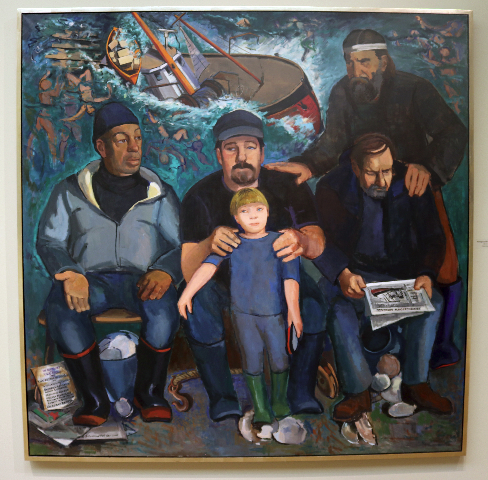 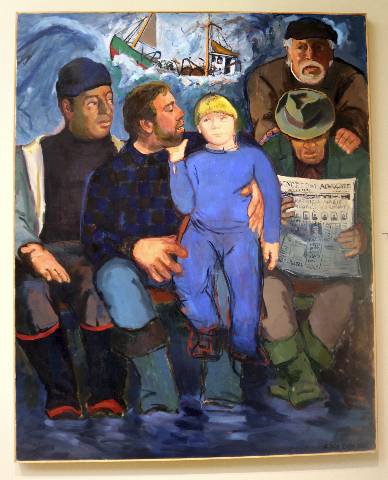 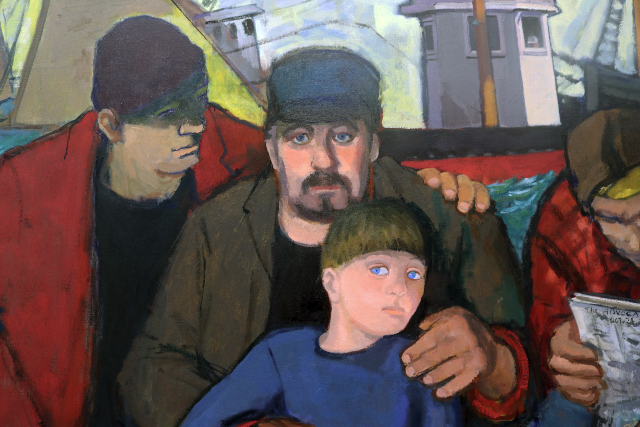 The images of the boy are particularly poignant. 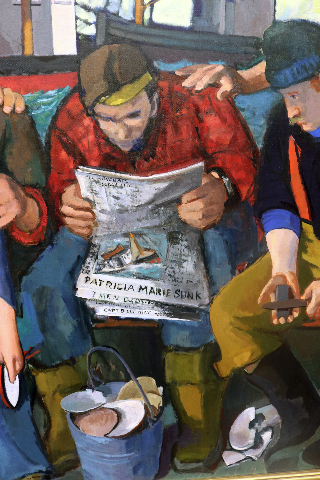 Reading a news account of the tragedy at sea.

Recently we viewed the stunning retrospective "Salvatore Del Deo: A Storied History" at the Cape Cod Museum of  Art in Dennis. It closed on October 22.

While in graduate school at Boston University, in the mid 1970s, I began what has proved to be a lifelong interest and research of artists of  Provincetown and the Lower Cape.

I met and interviewed Sal who, with Ciro Cozzi (now deceased), started a sandwich shop which expanded into the most renowned of Provincetown’s many storied restaurants, the still running Ciro’s and Sal’s.

By the 1970s they had parted ways and Del Deo opened his own restaurant Sal’s Place in the East End. I have been regaled with many incredible stories by the artist, Vico Fabbris, who worked for Sal and shared a passion for Italian cuisine. Dining with Vico is uniquely alla casaliga. The approach is expanding and inventing from family traditions.

The museum’s director, Edith Tonelli, informed us that Sal, now 92, was in great spirits and enthusiastically worked with her to select paintings that covered the range of his oeuvre from ambitious, figurative triptychs, to saturated, high chroma landscapes, still life and abstract canvases.

He is represented by Berta Walker Gallery in Provincetown.

Over the years I have seen individual works in exhibitions of the Provincetown Art Association and Museum but viewing it in depth knocked my socks off.

The artist’s wife, the poet, musician, and arts activist, Josephine Couch Del Deo, passed away a year ago at 90. Over a period of 20 years she researched and published “Figures in Landscape, The Life and Times of the American Painter Ross Moffett.”

During the era of WWI Moffett was a part of the generation who joined the artist’s colony that was formed around the summer school of Charles Hawthorne. Moffett was a third of the artist’s triumvirate that included Edwin Dickinson and Karl Knaths.

It was Knaths who drew me to town in the 1960s. I visited his studio and commissioned him for a portfolio of  lithographs I assembled for the United Church of Christ. That led to further research of the artist by then deceased. He, like so many of his peers, have been undervalued in the main stream of American art.

In that regard PAAM and CCMOA as museums have been crucial in preserving and promoting the phenomenal heritage of America’s oldest sustained colony of artists. There is also renewed interest in theater and playwrights including Eugene O’Neill and Tennessee Williams.

In 1964 Moffett published a comprehensive overview of the artists’ colony “Art in Narrow Streets.” There have been other histories since then but they pale in comparison to the depth and insight of Moffett’s book. We owe much to the sustained publications of the superb Provincetown Arts Magazine and its press.

When Del Deo and Cozzi settled in Provincetown after WWII they, like many on the GI Bill, came to study with famous teachers. Rather than learning “push/ pull” from Hans Hoffmann, the German born teacher and member of the abstract expressionist movement, they enrolled in the school of Henry Hensch. He had been an assistant to Hawthorne and continued in the tradition of plein air painting with saturated color and emphasis on the play of natural light.

That source is richly evident in the landscapes of  Del Deo, but rather than the impressionist broken brushstroke of Hensche, the surfaces of the canvases are flatter, more abstract and explode with saturated color. Here the famed Cape Light has been juiced up with astonishing intensity.

Particularly striking is a painting of fishing boats tied up to the town dock. The silhouette of a warehouse anchors one end. There are accents of color in the patterns of several boats parallel to the picture plane. Both sea and sky have been flattened into an electric expanse of intense cobalt blue. There are several typically P’Town distant views of  flat, parallel stacks of sea, sand and sky. It is a short hop from there to the hovering clouds of color in abstract paintings by Mark Rothko.

Del Deo is a part of the long tradition of artists, who remained “true to nature” as Ruskin stated, but played along the evocative cusp of non objective painting. Taking that next step Jackson Pollock responded to a suggestion by Hoffmann “I am nature.”

What intrigues about the work is pushing of the limits of site specific, plein air painting which has been finished and intensified in the studio. As Tonelli told a reporter it strikes her as abstract realism. That sounds like an oxymoron but spend time with the work and it is absolutely and precisely accurate.

When I was in college in the 1960s some of us would pack into a car and head to Provincetown. After a night of reveling we would sleep in the dunes. At first light we trekked to the Portuguese bakery for a hot loaf of fresh bread to eat out on the wharf.

What drew so many young artists to the Cape was a bohemian ambiance and cheap rent. It was possible to scratch out a living working in restaurants, odd jobs, and wading for clams. Guys took turns cooking chowder for gatherings of the male only Beachcomber’s Club.

Sal did all of the above and one summer went to sea with a scallop boat.

It’s that experience which so vibrantly resonates in the poignant triptych “Homage to the Patricia Marie,” that memorializes the sinking, in 1976, of the scallop boat of that name off Eastham. Seven men were lost.

The central figure in the three panels is a boy looking straight out at us. There is visible pain and loss in his expression. While staring at the viewer he appears to be looking into a beyond that will comprise a future without his dad.

The space of the panels is compressed by a cluster of several fishermen. One whets his scallop shucking knife. Another is huddled over a newspaper that reports the disaster at sea. In a panel we see the boat sinking in an imagined background with sailors foundering in pounding surf.

In form and color there is a bravura approach. This and another triptych convey the influence of German expressionism and Max Beckmann in particular. The grouping and subject of fishermen and loss at sea also evoked the Vinalhaven paintings of Marsden Hartley.

The exhibition accompanies the artist being given the museum’s annual MUSE award for outstanding contributions to the artistic community.