Chicago's Theater Tradition and the Birth of the Goodman 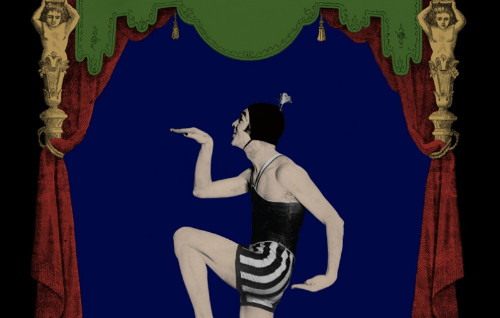 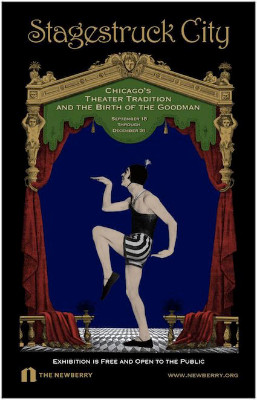 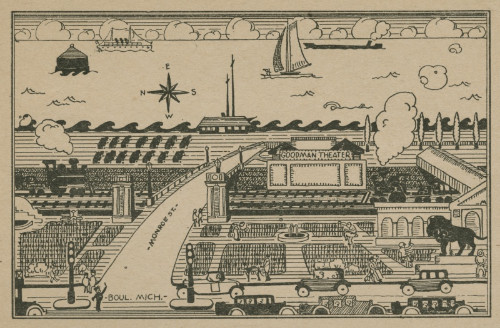 The venerable Newberry Library, best known for its genealogical and local research facilities, now has on display a fascinating exhibit about Chicago's early theater history, leading up to the founding of the Goodman Theatre in the 1920s.

Stagestruck City: Chicago's Theater Tradition and the Birth of the Goodman takes up three rooms at the Newberry's landmark 1887 building on Walton Street between Dearborn and Clark.

Making use of materials from the Newberry's archives, the exhibit tells the story of Chicago theater history starting with pre-fire days, the late 19th and early 20th century. Most of the performances in those days were by traveling stock companies, although there were some local productions. Famous actors such as Edwin Booth (shown at left) performed in Shakespearean productions at the McVickers Theatre (on Madison Street between State and Dearborn). One playbill illustrates his 1876 performances in Much Ado About Nothing, Hamlet and Richard II. (Yes, Edwin Booth was the brother of the Lincoln assassin, John Wilkes Booth, whose reputation unfortunately overshadowed that of his talented actor brother.)

Most visually striking are the colorful woodcut theater posters from the 1870s. Those posters were produced in handset type, letter by letter, and run off in small quantities. The poster for the Adelphi Theatre is one example, promoting shows like the Humpty Dumpty Troupe and the Russian Athletes at the venue located on the northwest corner of Dearborn and Monroe from 1875 to 1882.

By 1900, Chicago had more than 30 grand theater palaces. The histories of these commercial theaters include the story of the Iroquois Theatre, which was open less than two months before the tragic fire on Dec. 30, 1903. Some 600 spectators were killed, mostly women and children attending a matinee performance of Mr. Blue Beard. The present Ford Center for the Performing Arts Oriental Theatre is located on the site of the Iroquois at 24-28 W. Randolph. (The Ruffians have presented the story in their outstanding production of Burning Bluebeard for several seasons; it will be staged late this year at The Hypocrites.)

The early 20th century was an era of growth for traveling theater, vaudeville and burlesque companies, promoted by organizations such as the Shuberts. Local stock companies declined as a result but the "little theater" movement grew with experimental productions staged at venues such as Jane Addams Hull House and the Fine Arts Building.

The transportation revolution contributed to the expansion of these traveling companies. Rail service made it more convenient and economical for theater troupes to travel with casts, costumes and props. Locally, railroads helped promote local theater productions with schedules conducive for suburban and exurban theater lovers to travel to Chicago to see a performance. Some of their theater-oriented posters are part of the exhibit.

A featured character in the Stagestruck City exhibit is Kenneth Sawyer Goodman, a young actor and playwright and son of a wealthy Chicago family. Goodman was active in developing Chicago's noncommercial theater and died in the influenza epidemic of 1918. His parents wanted to memorialize their son's life and commitment to theater and donated about $525,000 to create the Goodman Theatre and drama school at the Art Institute of Chicago.

The building, at Monroe and Columbus Drive, was designed by Howard Van Doren Shaw and opened in 1925. It was designed with a Georgian front, a steep staircase downstairs, and the mainstage and studio space well below ground. The larger space was designed in the European model, with seats in continuous spacious rows and side aisles.

Opening night featured three plays by Kenneth Goodman. The theater began as a repertory company, producing classic and experimental theater, but during the financial troubles of the 1930s changed course and began to produce more commercial fare. Playbills from the Goodman's early years are part of the exhibit. (The Goodman theater school later became part of DePaul University. The Goodman Theatre moved to its current building on Dearborn Street in December 2000. Most Goodman attendees today probably don't remember the old venue, but I first attended children's theater productions there with my Aunt Isabel and later became a grownup subscriber.)

The Stagestruck City exhibit is not flashy, animated, colorful and noisy. It's a scholarly exhibit with the Newberry's original materials wall-mounted and displayed in glass cases with informative legend cards. The lighting is subdued to protect the antique materials.

Stagestruck City continues Monday-Saturday at the Newberry Library, 60 W. Walton St., through Dec. 31. Admission is free. You can take a guided tour of the exhibit at 6pm Thursday, Nov. 12, or 11am Saturday, Dec. 12. The Newberry has an excellent bookstore. The northbound #22 bus stops in front of the building and the southbound #22 nearby on Clark Street.