Opera in Cinema Expands its Horizons 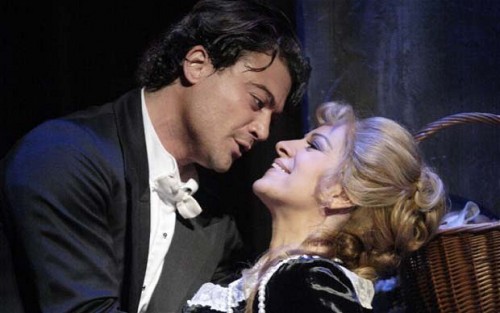 Grigolo and Gheorghiu electrify when they are together. 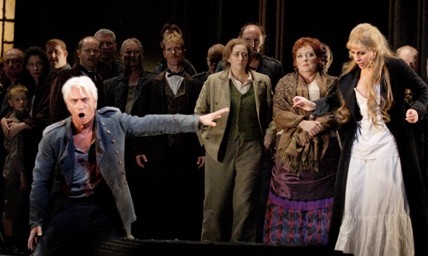 Hvorostovsky sings his heart out as Valentin.

The Berkshire Museum in Pittsfield and the Morgan Library in New York City have joined the more traditional cinema venues like the AMC movie chain to present opera on film, video and even 3D.

In a performance of Faust broadcast from Royal Covent Garden in London, the young phenom Vittorio Grigolo led a stellar cast including Angela Gheorghiu as Marguerite, Rene Pape as Mephistopheles and Dmititri Hvorostovky as a heart-wrenching Valentin.

Gheorghiu will probably not return to the Metropolitan Opera until she and General Manager Gelb put down their gloves.  It is too bad, because Gheorghiu is a superb and charming singing actress, and, while Marguerite may not be a natural fit, she sang a memorable "Jewel Song" and much else. That her ascension to heaven did not come as a reward for great suffering may have been a slip by the director, Lee Blakeley for this overall terrific revival.

Rene Pape makes a seductive Mephistopheles, leading with a lovely line, full of irony and wit, which led to a few winks at the audience that seemed a bit over the top.  But then this is Faust.

Grigolo has a lovely voice with a slight edge that sets it off.  At the start, I felt I had been mistaken in dismissing him when I first heard him at the Metropoolitan Opera.  He is a convincing actor and full of warmth and passion, but his voice is small. Singing in ensemble pieces you could not hear him at all.  Disrobing during curtain calls, he displayed a t-shirt reading, "Ciao Mami and Papi" and he flipped around to show the delighted audience the back, 'I Love London.'  Not quite enough to make up for the size of the voice.

It comes as no surprise, but always with wonder, that baritone Dmitri Hvorostovsky steals the show.  His limpid but thrilling lines, the huge voice full of color and richness, cannot be bested.  So too his commanding performance. Singing Avant de quitter ces lieux, he is stunning.

Now for the really good news. I like the Met HDs, and always enjoyed the camera moving as a musical line.  But thrust back in this production to mostly medium and long shots which are often held through an aria, I was glad to be back at the opera. Music lovers do not need the distraction of a moving camera.  Nor do we need to look close up at most opera singers.  It is very unfair and inappropriate to cast on beauty when the voice is not there.  A little kind distance, which also allows the viewer to enjoy the glamour of opera -- sets, costumes, lighting, is welcome in these filmed operas.  Where the Met may have invented a new form,  flopera, or vidop, these Opera in Cinema broadcasts from Emerging Pictures may give you a chance to see and hear the real pleasures of the form.  Check out the calendar at Berkshiremuseum.org.

If you are in New York, stop by the Morgan Library. You get a discount for the opera films if you are a member, and once inside the new Renzo Piano atrium, with Dickens in America off to your right alongside a room of drawings by David and Delacroix from the Louvre, you just may want to settle in.  Often delicious Tapas and music by young musicians give delight in the atrium.  Boston Early Music Festival performers will grace the museum in January and March, so you won't feel far from home.