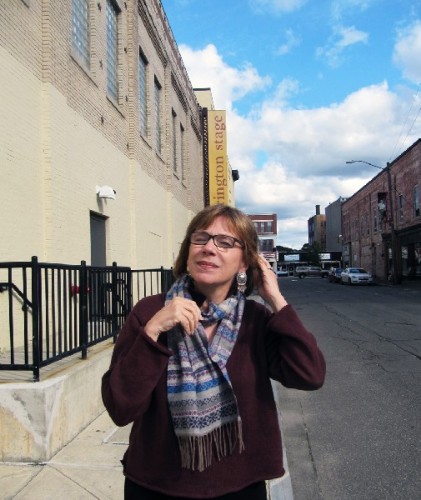 Artistic director Julianne Boyd has paid back a $500,000 loan from the city of Pittsfield. Giuliano photo

Barrington Stage Company (BSC), the award-winning theatre in Downtown Pittsfield, MA, under the leadership Artistic Director Julianne Boyd and Managing Director Tristan Wilson, reports that its $500,000 loan has been officially discharged by the City of Pittsfield for the restoration of the Mainstage Theatre on Union Street.

Five years ago, the city of Pittsfield took a chance on the arts. Mayor James Ruberto and his team had a bold idea—they believed the arts could lead Pittsfield’s economy and, through capital investments made possible through the GE Redevelopment Fund, the City made a forgivable loan agreement with Barrington Stage Company. The terms for the five-year promissory note stated that if Barrington Stage remained in the city for five years, the $500,000 loan would be forgiven.
“We are here to stay—artistically, with our investment in new work, classics and education programs for youth, and financially, with our commitment to this theatre and to this city,” said Artistic Director Julianne Boyd. “We want to thank Mayor Ruberto and the entire city for believing in the little theatre company from Sheffield who ‘thought they could.’”
The loan was used to restore the mezzanine of Barrington Stage’s Mainstage theatre, increasing seating capacity from 300 to 520 seats. As part of the agreement, Barrington Stage also fulfilled its promise that 50% of all education programs serve residents of Pittsfield, including its award-winning Playwright Mentoring Project for at-risk youth and KidsAct! programs for budding theatre artists. Barrington Stage also agreed to hire two additional staff members, which was accomplished in the first year of the loan agreement.
This year, Barrington Stage celebrates its sixth year in Downtown Pittsfield with its best-selling season to date. More than 250 performances were presented including the best-selling musical (Guys and Dolls) and best-selling play (the world premiere of The Best of Enemies) in its 17-year history. Other productions in the season included The Game on the Mainstage; Zero Hour, Going to St. Ives, the world premiere of Mormons, Mothers and Monsters (a production of the Musical Theatre Lab) and My Name is Asher Lev on Stage 2; the Youth Theatre production of All Shook Up; plus numerous concerts, cabarets, staged readings and the Conversations With… series. Attendance for BSC’s 6-month season was nearly 47,000 and single ticket sales exceed $1 million for the first time in the company’s history.
In August, BSC announced that the heartwarming, Tony Award-winning musical Fiddler on the Roof would open the 2012 season. This was the earliest season announcement in BSC's history and has already yielded more than $70,000 in subscriptions for next season.
“We could not have accomplished so much and grown so significantly without the incredible support of our audiences and the elected leadership of Pittsfield. We truly feel embraced by the entire community in this vibrant city,” said Boyd. “We are so grateful to call Pittsfield our home and look forward to continuing to contribute to the creative community leading Pittsfield’s economy.”
Back to Theatre Section Home