Opera Notes: Siegfried at the Met in HD 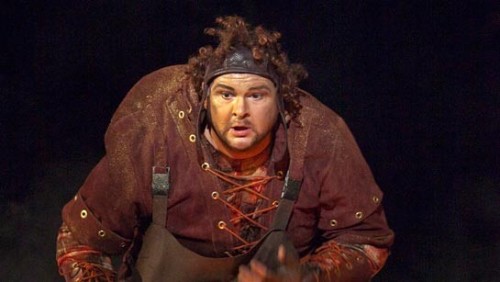 Gerhard Siegel created his100th performance as Mime in Siegfried. Approved in Bayreuth and venues throughout the world, the Met Opera is lucky to have him singing. 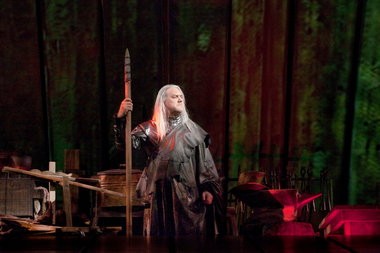 Bryn Terfel has come into his own in the Wanderer/Wotan role in the Ring. Confidant even when he walks one of the machine’s planks to its end, he sings beautifully when others might jump, or fall, off. 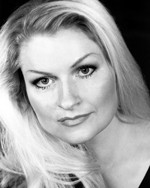 Patricia Bardon has a lush mezzo, and creates a special Erda,swathed in the minerals of the underworld.

Siegfried comes to the Mahaiwe in Great Barrington and Beacon Cinema in Pittsfield this Saturday at noon.  A musical run parallel to the New York City marathon.  I am a fan of the new Ring set, called fondly The Machine, although I recognize that it is a work in progress. What no one talks about, however, is the problem the singers have negotiating its rake.  In a panel discussion on Siegfried, Gerhard Siegel, who sang his 100th Mime on Tuesday, talked about his problems and was quickly cut off by General Manager Peter Gelb.  At the HD dress rehearsal, he did not seem comfortable moving on the machine, although his performance was brilliant.

At that same panel discussion, the then Siegfried, Gary Lehmann, said he had problems remembering which prop to pick up -- horn, flute, or sword, and also was bumping into a virtual bird designed by Lepage.  Pressed by Gelb who seemed to want Lehmann to say how great the HD was going to be, Lehmann kept saying, "I will try.  I will try."

But he was not going to have the chance to try.  Less than 24 hours later, he either quit or was canned, and Jay Hunter Morris, a Texan who sang the role in San Francisco and was covering at the Met, stepped in, or up. New posters were quickly put up with a very sleek, good looking Siegfried promising to deliver.

Jay Hunter Morris does. This tenor has been around for awhile, and disappeared before his current incarnation as a heldentenor.  The demands of the role have felled more than one great tenor.  Morris does more than end up vigorous and standing.  He moves comfortably, first as a young man full of playfulness and curiosity and in the end, insisting on awakening his sleeping beauty, Brunnhilde.  He has a strong voice often displaying the heldentenor's ping, he is a master of the difficult text, and trips up neither as he sings or runs.  Like Siegfried Jerusalem, whose voice was not compared to Laurence Melchior's, Morris is going to deliver, and that must warm the hearts of General Managers mounting the Ring.

Morris has the good fortune to be bolstered not only by the go-to Mime of today, but also by Bryn Terfel as Wotan in disguise as the Wanderer here. Terfel has grown in the role, which now fits him perfectly. His lower registers are rich and full of color.  It is clear that despite some glaring inadequacies in the direction, Terfel always takes matters in hand and directs himself so he has full control of his roles.  Patricia Bardon singing Erda is a lush mezzo to watch.  She will be Anna in Rossini's Maometto II at Santa Fe next summer.

The oddest directoral choice is a non-choice. In the four part Ring, this third part alone takes place in the human world.  Individual performers indicate this without any support from the set, but you would never know, when Brunnhilde wakes, that she is human.

The HD will probably be okay. Certainly music conducted by Fabio Luisi is wonderful.  Tuesday evening, Derrick Inouye conducted.  In Acts I and II you would not have thought the orchestra was playing Wagner.  At one point, I expected an Offenback waltz to erupt.

This question haunts:  Is the 'dress rehearsal' performance in the house at the Met put on to block the HD?  People come from all over the world for the Ring.  Tickets cost  hundreds of dollars.  Can you give them a 'blocking' performance? A question that does not plague the Met's General Manager. Voight as Brunhilde arrived late to sing her role in Act III and ran onto the stage and collapsed in a heap so that she would be ready for discovery by Siegfried.  Cameras don't have to show this, but the audience clearly did.

No doubt the visual effect of staging is first and foremost in Gelb's mind. As virtual fire roars over the planks of the Machine in the finale of Siegfried, the stage is like a Las Vegas nightclub. The fire is neither pretty nor threatening.  It merely distracts.  A virtual bird, which hit Lehmann during rehearsals, looks like a cross between a fish and a squirrel.

Gelb is no artistic director, but seems to like the role he has inherited by default.  My guess is that no 'music director' or 'artistic director' worth his salt will take on the role without an explicit agreement with Gelb as to who is in charge in this department.  Karita Mattila was booed in her native Finland when she sang Tosca four years before she took on the role at the Met.  No one noticed.  Gary Lehmann has always wondered whether or not he was a heldentenor.  An agent, understanding the huge gaps in Gelb's musical education probably foisted Lehmann into the role. Gelb who does not show signs of having an ear or ignores musical judgment when he casts, just went along in desperation.  There are not many Siegfrieds around. Johan Botha, a great heldentenor, has stayed away from the role so far.  Anyway, Gelb does not think he looks right -- he is barrel chested and does not move.  But he has a huge, ringing voice, which does not count for much at the Met in its current incarnation.  (Angela Meade, Stephen Costello, excepted).

Marilyn Horne said very much this in a interview with Zachary Wolfe. Wonderful opera singers are not prepared for the  closeups Gelb casts for first and foremost.

Lots of excitement here for the arrival in New York of the Met-disgraced Angela Gherghiu at Carnegie next week to sing Adriana Lecouvreur with Jonas Kaufman and the Opera Orchestra of New York, and the premier in New York of Nico Muhly's Dark Sisters, some say due at the Met in 2014 or so.  We will cover both events.

Correction:  Voight was not late last night.  The set malfunctioned.  I simply thought that planks were noisy.  In fact, as Siegfriend started his climb, several planks thundered into down position.  The set did not move again.  No injuries were reported.  Same thing happened on opening night.  You may get to see if if you attend the HD on Saturday.