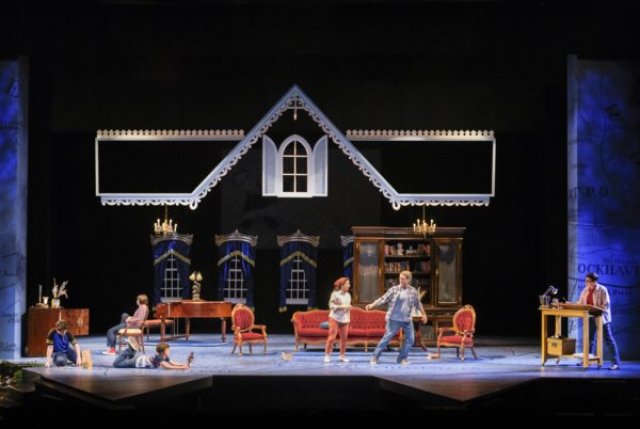 Fun Home which is now at TheaterWorks Hartford through Sunday, Nov. 6  brings the graphic book of the same name to life in an excellent production. The show won multiple Tony awards in 2016.

Don’t we all spend a good part of our lives, looking back at our parents and our up-bringing and trying to make sense of it all? At each age, we have a different perspective, and our insights continue to grow. In the process, we may find that forgiveness and tolerance develop.

When I was growing up, the term “graphic novel” meant something bordering on pornographic; now it means a work of literature that combines comic drawings and words.

Lisa Kron wrote the book of the musical based on the graphic memoir published in 2006 by Alison Bechdel. (By the way, this is one of the literary works that is often challenged by parents and others when it is in high school libraries).

A memoir may not be as accurate as an autobiography or as complete. Fun Home (the book had the subtitle A Family Tragicomedy) tells Bechdel’s life growing up in a small town in Pennsylvania with her siblings, her English teacher father and her mother. In addition to teaching at the local high school, her father (Bruce) runs the local funeral home for whence comes the title. The family refers to it as “the fun home.” Plus, he is an obsessive historic house renovator, tag sale aficionado and more. He wants things perfect.

Of course, it is all a cover for the fact that he is very much imperfect. He is attracted to men, particularly younger men – just post-high school, and at times, maybe still in school. This is a secret that strains both the marriage and his interactions with the children. He is at times rigid and demanding and when his daughter Alison doesn’t want to do something he wants, he easily manipulates her. The old “if you want to fail (or be lonely or be different) you can ….” This, of course, immediately shames her into doing what he wants, whether it is how a school project is completed or what she wears to a friend’s birthday party.

As Bechdel tells us midway through the play, her father committed suicide shortly after she came out as a lesbian.

Three different actresses play Alison – each is terrific. The musical is narrated by the adult Alison (Sarah Beth Pfeifer) who is working on the graphic memoir based on her family. Then there is the “small Alison” who is a child of 8 or 10 and finally “medium” Alison, a college freshman.

Director Rob Ruggiero has done his usual fine job both casting and directing this piece.  Skylar Lynn Matthews is a find as “Small Alison.” Her rendition of “The Party Dress” which is about seeing a woman delivery driver and her keys was remarkable.

But each member of the cast shines. Aaron Lazar has the central role of Bruce, who seems to dictate how the house operates. Lazar is brilliant in the role, slowly letting us see the cracks in the façade. What at first appears to be a dogmatic, domineering and compulsive person, slowly becomes a man well aware that he is walking a tightrope that is about to break.

Christiane Noll has returned to TheaterWorks  after her brilliant work in Next to Normal. The role of Helen, the wife and mother, is not as showy but the character needs to provide the steadying hand and quiet observations. Noll accomplishes that, and your heart breaks for her when she sings “Days and Days.”

As the narrator Alison, Pfeifer is both matter of fact and alert to all the hints of what was going on that she missed when she was younger. She has the next to last number in the show, “This is what I have of you” which captures regret and love.

Medium Alison, played by Julia Nightingale, does good work especially in her coming out scene.

Each member of the cast including Cameron Sullivan as Medium Alison’s girlfriend, Joan, and Ali Louis Bourzgui as a variety of Bruce’s “friends” and the two young actors (Sam Duncan and Myles Low) as the brothers are excellent.

One of the most interesting and best parts of the production is the projection design of Camilla Tassi. As Alison and other talks, snippets of the text and the drawings appear on the set. Set designer Luke Cantarella has created a two-part set – at the back against what looks like wooden blinds, Alison works on her book and later Medium Alison meets up with Joan in the dorm. Down front – with side panels that appear to be wood, the scenes change easily from the house to the other locations.

This is a big show for TheaterWorks Hartford with a cast of nine and a band of seven.

Under Ruggiero’s sure hand, it comes together to create a thought-provoking and moving play.