Curator Helen Molesworth Is Against Interpretation 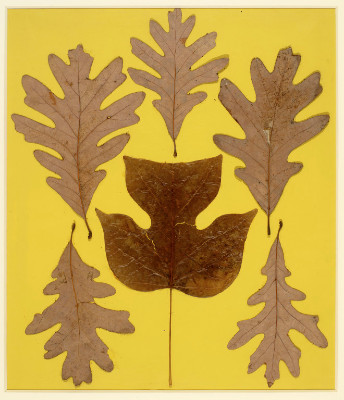 This leaf collage by Josef Albers is the cover illustration for the exhibitions catalogue published by Yale University Press.

During the ICA’s press conference for its major exhibition, Leap Before You Look: Black Mountain College, 1933-1957, including a tour with Ruth Erickson who worked with the now departed curator Helen Molesworth, we spent some five plus hours scrutinizing roughly 200 works by about 100 artists.

It has taken considerable time since then to read, and in some chapters reread, the immense illustrated catalogue (Yale University Press) with essays by the curators as well as contributions by more than twenty scholars some with multiple essays.

That comprises an enormous amount of research and information but leaves me with the unsettling feeling that I now know a lot about Black Mountain College but with no firmly resolved insights or conclusions.

Part of that stems from the strategy of Molesworth to present a deconstructed collage of many well researched aspects of the college while avoiding a linear, perhaps old fashioned, straight-forward history of the legendary matrix of seminal European and American leaders in fine arts, performance, music, dance, crafts, architecture and literature. This confluence occurred during the formative years from the midst of the Great Depression, WWII, and the post war era of the Cold War and McCarthyism.

The conventional narrative is that the fine arts in America evolved from provincial regionalism and social realism to the global dominance of the New York school and abstract expressionism.

In rural Appalachia the experimental liberal arts college might well be viewed as a laboratory to test established theories about how, through a combination of global depression followed by WWII, the epicenter of the international avant-garde relocated from Europe to America.

This transition apparently occurred not just from urban Paris and Berlin to New York but with a side trip first and intriguingly to Ashville, North Carolina.

With enough critical distance we more readily see the jingoism of the leading theorists of that period of the New York School and Abstract Expressionism including primarily Harold Rosenberg’s “Action Painting” and “American Type Painting” (“Coonskinism”) or the essays of Clement Greenberg.

As Dylan stated in Ballad of a Thin Man "Something is happening here/ But you don't know what it is/ Do you, Mr. Jones?”

It’s a trap or trope that Molesworth refuses to fall into.

She states that “…Part of the myth of Black Mountain College is that it represents in microcosm, the historical trajectory of post-World War II art, namely that the concentration of avant-garde art making and theorizing would shift from Europe to America. Threadbare from its retelling, the tale can be found on any average American art historian’s bookshelf, in such titles as How New York Stole the Idea of Modern Art, The American Century and The Triumph of American Painting. It’s no wonder that the hegemonic bias of this narrative infiltrated the early critical writing on Black Mountain…”

The Marxist art historian Serge Guilbaut’s 1984 How New York Stole the Idea of Modern Art reads like a conspiracy theory of promoting American art and culture, from Hollywood to abstraction expressionism, as a part of post war, government sponsored exporting of propaganda through cultural consumerism.

Numerous studio visits and dialogues with artists, including programming when Irving Sandler ran the seminal Artists’ Club a hangout and debating society for the abstract expressionists, distilled into his accessible, linear and populist account the 1970 book The Triumph of American Painting.

The key word ‘triumph’ implies America as a winner with the implication of the defeat of European culture. The notion is offensive as culture should not be viewed as a form of combat. On the home front were the movements of American artists prominent during the Depression and supported by the WPA “defeated” by the emergence of abstraction as the focus of an avant-garde. It was debated during the seminal Forum ’49 in Provincetown and meetings of the Artist’s Club.

Lester Johnson, a founding member of the figurative expressionist movement of the 1950s, told me that he was one of the few figurative members of the Artists’ Club.

During an interview with Sandler I asked why he chose that simplistic, passive/aggressive title? He told me that the title was a decision of the publisher to help sell the book.

In 1933 Josef and Anni Albers were recruited to migrate from Germany, where they taught at the Bauhaus, taking their elaborate pedagogy to Black Mountain College. Josef chaired the fine arts department and Anni established the important programming in weaving and fiber design. Another Bauhaus couple was Xanti and Irene Schwinsky. He taught theatre and design as a former student of Oskar Schlemmer who he tried to recruit for the college.

Walter Gropius, the former director of the Bauhaus, and Marcel Breuer visited Black Mountain. They were commissioned to design a new campus but it proved to be too expensive to execute. When Gropius became head of the Harvard School of Design and Architecture he said that it would be best if all of his students studied first with Albers at Black Mountain.

Particularly during the years when Albers was a Black Mountain many leading Europeans passed through the campus including the French artist, theorist and architect Amedee Ozenfant. The Dutch born Willem de Kooning was invited by Albers to teach. This was repeated when Albers chaired the graduate program at Yale.

Albers while viewed as narrowly focused on non objective art welcomed a diversity of opinion from other faculty. The African American artist, Jacob Lawrence, taught at Black Mountain. Later, when the school was headed by poet Charles Olson, he invited the Social Realist Ben Shahn which resulted in unique collaborations in the performing arts.

The separation of truth from myth, however, is never simple and obvious; particularly when the deconstruction of post modernism is added to critical research and development of theory.

As we learned in Akira Kurosawa’s 1950 film Rashomon there are many ways of telling the story of what happened in the forest.

Conflating Albers and Bauhaus one anticipates a Teutonic pedagogical system cross-pollinated to his American colleagues and students. Reading carefully, however, we learn that Albers and his wife were morphed by Appalachia and particularly time spent in Mexico photographing and learning from its ruins and ancient glyphs. Their designs and her weaving techniques, in turn taught to their students, were deeply enriched by contact with ancient Mexican art, craft and architecture.

Teaching during the depression years Albers encouraged students to use local natural materials for their assignments. An Albers design using dried leaves is used as the cover illustration of the catalogue.

It is fascinating that Ancient America was also a major influence on the poet Olson during his years at Black Mountain and vacations in Mexico. He was intrigued by the glyphs as word and image. It is significant that he was writing his Gloucester inspired Maximus letters and poems while resident in Appalachia.

We read that Black Mountain’s European faculty was shocked and offended by a Cage combined lecture and performance which dissed Beethoven and harmony while advocating the French composer Erik Satie and his emphasis on duration.

The part of Molesworth’s essay that requires careful study is titled “Gossip.”

“Despite the current vogue in contemporary art and theory for the archive, I must confess that I don’t like them. All that dried out paper. The musty smell. The rules and regulations. Not my kind of party. Plus I’m at least as likely to be overwhelmed by what’s not there as by what is…”

“Then there’s the problem of the dead. They have no privacy. I sat, bewildered at the Getty Research Institute reading M.C. Richards love letters to David Tudor…”

She informs us about the uneasy feeling and wondering what to record in her several notebooks. Just how is this gossip relevant to telling the complex story of Black Mountain? Yet, some of this insider info provided uncanny leverage to pry more information from sources. We wonder with her about the ethics of voyeurism and secrets we opt to take to the grave.

“I suppose I thought that the archive would produce a set of facts that I could marshal into a narrative; they did and I have. But the gossip mounted, and I didn’t consolidate the facts or the truths-which is one of its negative functions. Instead it cast a queer light on the official documents such as class notes, oral histories, and the many memoirs…”

It conveys a curator with attitude.

“(Irit) Rogoff offers a slightly different tack: she is interested in understanding ‘the persistent appearance and reappearance of gossip in close vicinity to master narratives, in particular grandiose historical moments or achievements in Modernism.’ For Rogoff, gossip appears as a narrative device that points to gaps and elisions in master narratives…”

Which is why “…the authority of the text, of history, or of the overarching truth claims, remains in play. Such is the kind of text I hoped to write, for I felt certain that there could be no definitive text that could tell the story of the years between 1933 and 1957 in the environs of Black Mountain, North Carolina…”

The irony is that the approach of Molesworth is true to the spirit and legacy of Black Mountain College. This wouldn’t work, for example, as a trope to focus on the history of the Bauhaus. It wouldn’t seem to be this messy.

We are frustrated but actually prefer the non linear approach of her curatorial vision rather than a neat and easy update of received information. It is closer to the truth that we lie about ourselves and to each other. The ambitious artists among us are always busy working at myth making and generating our own gossip and that about others.

The Molesworth approach is unsettling but encourages further thinking and research. Ultimately there are always more tough questions than easy answers.

I have lived long enough to read lies and misinformation about events I participated in. There are too many bad catalogues resulting from poorly organized and curated exhibitions. Because of the time and expense involved it is unlikely that mistakes are corrected.

If a lie is told often enough- Weapons of Mass Destruction- it becomes a truth.

In a recent NY Times review of a book about Lou Reed we have an example of lies and myth making. “ ‘That’s not a person I recognize,’ Ms. Ramos said of the Lou Reed portrayed in the book. Many damning anecdotes, she added, seem to come from people Reed knew in the hazy drug-fueled 1970s ‘that I know for a fact were not capable of remembering anything they did in any given six-month period during that time, much less come back all these years later and say, ‘Oh, yes, I was there, this is what was going on.’ ”

It is possible that when Molesworth entered the labyrinth of archives, oral histories and dialogues with survivors, she did not unwind the ball of psychic twine to find her way back to the clear light of day.